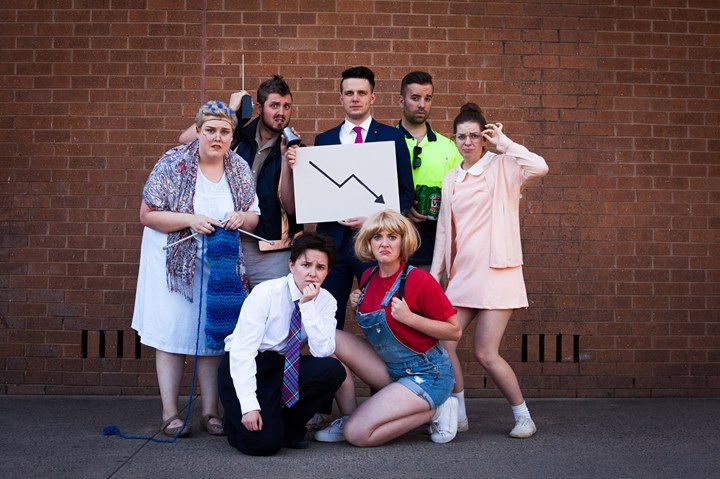 I’m not quite sure how to describe Pilot Season, a sketch show performed at the Canberra Comedy Festival. A few of my friends were in it, and they had been telling me about the show for weeks before the festival, so I thought I had an idea of what I was going to be seeing. Turns out I didn’t. Pilot Season was the wildest ride I’ve ever been on. It was an absurdist piece of sketch comedy, full of twists, turns, and unanticipated dead ends. It was like nothing I had ever experienced before.

The show embraced its absurdity with vigour. It was refreshing to see a piece of theatre that didn’t require you to suspend your disbelief; well, even if you had tried, you wouldn’t have been able to. In fact, part of the fun was wondering how it is that anyone could come up with characters and plots so eccentric. This was the kind of show that leaves you feeling bewildered, confused and, of course, amused. I’m pretty sure I even remember someone (maybe me?) yelling out “what just happened?!” when it ended.

There were a few technical problems, like when the lights came up too soon or when the wrong audio was played. But these minor errors didn’t detract from the show’s outrageous brilliance.

But don’t let my emphasis on the absurd nature of the show fool you into thinking that it was all pure mindless entertainment. Upon closer inspection, many of the sketches were clever social commentary that went beyond the traditional realm of “silly” sketch comedy. Many touched on modern media’s tendency to abandon anything that is not at the peak of its popularity and focus on the next big thing, only to abandon that too. The show even ends on one of the finest (and funniest) examples of the Milkshake Duck phenomenon around. It’s immensely impressive how the people behind the show managed to discuss such complex ideas through an hour straight of what at first seems to be absurdism with no point other than humour.

There’s a chance that I’m very wrong and that the show was never intended to be That Deep. Either way, Pilot Season was, for me, the highlight of the Canberra Comedy Festival. It was the most fun I’ve had in a while, and it’s exactly the kind of comedy that the world needs right now.