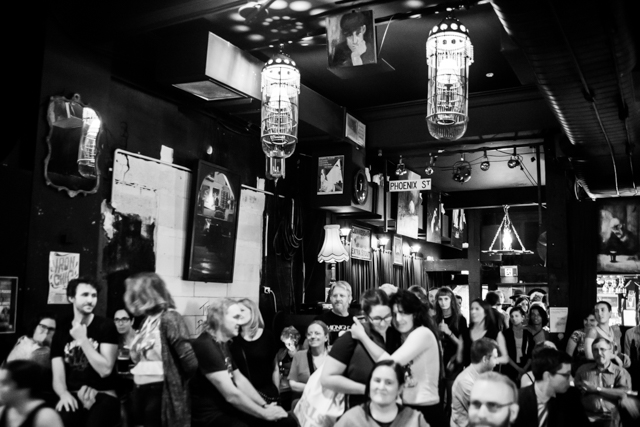 Even on a Tuesday afternoon the room was full; likely fuller than it had been on a Tuesday in years. Even with the short notice, people were keen to come out of the woodwork for this. Even if there was a whiteboard prominently involved at the front of the room.

“The Phoenix is more than just around 30 square metres of space – it’s essential to the cultural capital of Canberra,”

said Chris Endrey, summing up why around a hundred people were packed into a pub on a sunny Tuesday arvo.

It’s absolutely no secret now, but The Phoenix has hit harder times in recent years. From the more outwardly noticeable events such as the Sydney Building fire of 2013, the eviction notice placed on the old half of the pub and the temporary closure of the venue late last year, to the little things, like stopping running trivia last year, or not always having beers on tap during gigs, the Pheonix has shown some signs of trouble.

This reached breaking point when The Phoenix posted on their Facebook page that the pub was in serious trouble. The community response was immediate, and offers to help save the Phoenix occurred immediately. Donations flowed, but a more concerted push would likely be needed.

Ad-hoc emergency community groups are a fascinating beast, unlike many other organisations. Status and structure are fluid, with only the end goal fixed (in this case saving the pub). The Tuesday in question was the Save The Phoenix Brigade meeting, an event designed to get people who gave a shit about the pub to do something about it.

Ideas flowed from all corners of the room, and support offered from various parts. The Green Shed had already kicked in $5k; a generous gift for anyone. A raffle of band merch was suggested (which ended raising more than $1k) along with a mini film fest focused on the pub, amongst others. Not all ideas were good, and even fewer seem to have been implemented, but there seemed to be momentum in the room that something could be done. In almost no time various news outlets were covering the crisis, which is rare for (what to outsiders is) a small pub.

Bands who haven’t hit the stage in a while have put their names down to hit the stage, as have punters who haven’t been back in a while. People have a habit of supporting something when they might lose it, as either a sign that they cared or as a last goodbye.

When BMA tried to go the Slow Turismo gig the following Saturday night, we were met with a line of 50+ people, that just wouldn’t budge. Every night of the following week seemed to be getting busier, as people were trying to keep the damn thing alive. Or to reclaim bits of their past, which they might lose a link to forever. There even seems to have been an uptick of those going to the Phoenix for the first time, to check out what they were missing before it disappeared. As long as they pay, the Phoenix will take their cash. And hopefully them coming down will help keep the place open going forward.

Fred Smith, now nationally acclaimed for his gritty songwriting, played a week and a half after the news broke. During his early Wednesday night set, in front of a now customarily busy Phoenix, Smith shared his history with the venue, dating back to the early to mid 90s where it was one of the few refuges for creative types in Canberra. More than two decades on, it is still that place, used by many to escape from work, study, reality or other.

In true Phoenix fashion, Smith finished with a song about swinging dicks (albeit in a warzone).

It’s not just the Phoenix that is in the firing line; it’s the broader cultural identity of Canberra. The potential closure of the Phoenix goes beyond just one venue; it is starting to become emblematic of a wider threat to live music and performance in Canberra, especially at the grassroots level. Venues may come and go over time, but a whole lot more seem to be going (Zierholz@UC, ANU Bar to name just two) than starting, with rumours circulating that other venues might be going soon too.

“An example (of) how important the Phoenix is to the health of Canberra music – think of it as our own little Tote from Melbourne, or Annandale in Sydney. One of them survived because people voted with their feet and one of them didn’t. You can help decide on the future of the Phoenix!”

The goal is extremely high, and the mood has been cautiously optimistic from those I have spoken to. While the Save The Phoenix GoFundMe page is more than half way to its stated goal of $75,000 in just under two weeks of operation, the timelines are tight and it still might not be enough. A note sits on the fundraising page saying that:

“An additional $75,000+ would help us revitalise the current venue, with a view to daytime trade and increasing of capacity to keep the property a long term viable live music venue and pub.”

It’s impossible to predict the future, but also impossible to root against a venue that has put on over 10,000 shows and 15,000 bands over the years. If you have a free night or two over the next couple of weeks, go down a check out a show and grab a sneaky drink or two – otherwise you might not get the opportunity to in the future.

Support Cody Atkinson on Patreon!
7% complete
When we reach $500 per month we will begin the official BMA Podcast. This will include interviews with some well-known musicians and artists, tips and tricks for publishing in print and online, as well as other discussion topics around Bands, Music and Arts in Canberra!