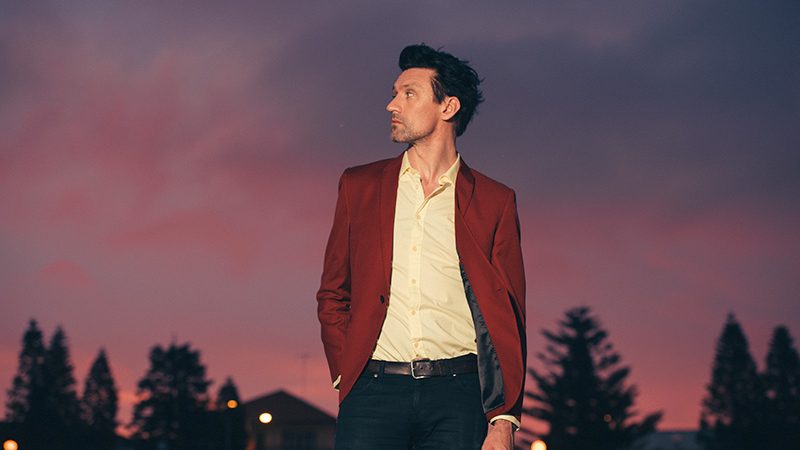 After we establish that he’s part-lizard and is loving Melbourne’s summer heat wave, PAUL DEMPSEY and I start talking all things music, Canberra and bobbleheads. While he’s been writing and performing with Something For Kate (or SFK) since the early 1990s, Dempsey’s solo career has taken off since the release of his debut album Everything is True in 2009. Since his 2016 album Strange Loop, he’s hardly stopped touring, whilst also balancing his SFK life with perceived ease. I ask him about the transition in becoming a solo musician and why he did it.

“The answer is complete and utter self-indulgence.” We both laugh at his blunt honesty. “I love being in Something For Kate and I love what we do together. But sometimes you want to play drums, and the bass, and do it exactly the way you imagined it in your head. The only way to do that is to do that. But I don’t want to do that all the time because I’d get bored with myself.”

“It’s lucky the way we’ve been able to juggle things. It keeps Something For Kate really fresh. We do it when we’re genuinely excited about it.” This amazes me, and I ask him how he’s managed to keep things interesting after performing together for over 20 years.

“I love it as much as I ever did, even more so in fact. After such a long time, you get more relaxed about it. You can really enjoy it on a different level. And I feel like I’m a bit better at it than I used to be. Slowly, I’ve become a bit of a better singer and a bit of a better guitar player. Even ten years ago, I was just nervous and anxious, and I don’t think I feel that way anymore. I just don’t have bad shows anymore.”

My only response to that is a quiet, “Wow.” He quickly adds, “By that I don’t mean, ‘every show I play is fantastic!’ I mean, in myself, I’m able to make any situation fun.”

Dempsey has expressed before that performing is his favourite part of the whole musical process, so I ask him what he gets out of it personally.

“Play for a friend, play in pubs, in bars, in shopping centres. Play and write as often as you can.”

“It’s like a little holiday in your head. You’re not worrying about anything, you’re not thinking about what you did yesterday and what you’ve got to do tomorrow, you’re not thinking about your cat. And when it’s over you feel like you’ve run a marathon or meditated for two hours. You’ve expended a whole lot of energy, and at the same time, you’ve been out of your head. Some people are gym junkies, or yoga freaks, or drug addicts, but everyone has their way of getting out of their head.”

Dempsey is one of my favourite performers and lyricists. While this may be because SFK were the first band I ever saw live when I was a wee 12-year-old, I’ve always been struck by the raw honesty in Dempsey’s intricate lyrics. I ask him if performing such personal stuff can get draining. He responds, “I don’t know if draining is the right word.

“It’s hard to be honest. It’s hard to stand up and be honest with people. But it’s your expression and you’ve got to express it.”

For Dempsey, being honest is something he values in his song writing. “I’d be short-changing myself if I was dishonest in my songs, because I’m the one that’s got to get up every night and sing them. With everything I write, I try and do it in such a way that it has layers and facets, so that every time I do sing it, I can sing it differently, and it’s not one-dimensional.”

As we move on to Dempsey’s thoughts on our Canberra, I learn that Telstra Tower reminds him of Endor from Star Wars, that he didn’t know Questacon existed until recently and has never been, and that some of his favourite times in our capital were the small gigs at youth centres Something For Kate played as a young band. I also learn that the Paul Dempsey bobbleheads (yes, they do exist), were not his idea, but he went along with them so as to produce the most ridiculous merchandise possible.

To leave us, I ask him if he has advice for young musicians entering the Australian music industry. “My first thing would be discard any idea of entering an industry. The thing you can do tomorrow without needing anyone’s help or permission is book a gig. Play for a friend, play in pubs, in bars, in shopping centres. Just play and write as often as you can, anywhere you can, and if it’s good, people will start talking about it.”

Paul Dempsey will be swinging by Canberra Theatre Centre for an intimate solo performance on Saturday February 3 at 8pm. Tickets at canberratheatrecentre.com.au for $50+bf.

Liked it? Take a second to support Jayne Hoschke on Patreon!

Support Jayne Hoschke on Patreon!
11% complete
When we reach $500 per month we will begin the official BMA Podcast. This will include interviews with some well-known musicians and artists, tips and tricks for publishing in print and online, as well as other discussion topics around Bands, Music and Arts in Canberra!