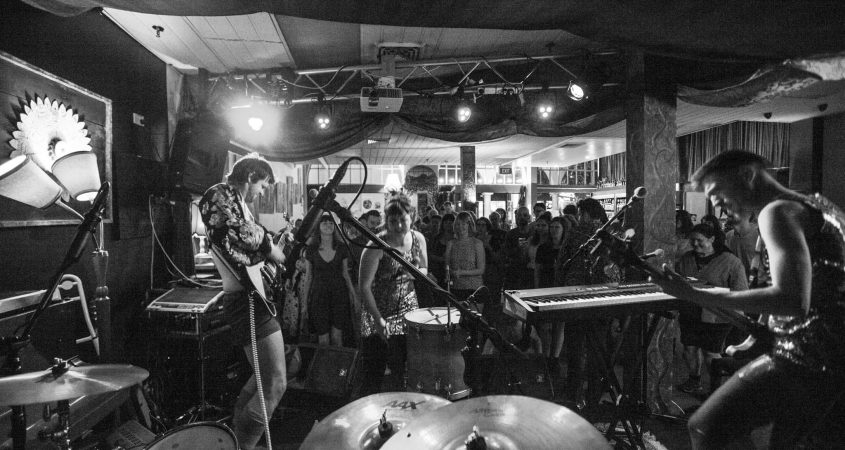 Few Canberra bands have held a city-wide reputation for delivering utterly unique, jubilant and glitter-fueled live sets as FUN MACHINE (actually, we can think of one other band on the glitter front). With its band members focusing on their solo creative pursuits over the last few years, it’s exciting to see the iconic Fun Machine banding together once more. We sat down with Chris Endrey to find out what the gang have been up to.

So, it’s been a while. What have the Fun Machine clan been up to since we last heard from you?

Jesus. Big question because we’re all scattered to the winds and all working hard. Something like: Bec is unstoppable. She’s started the Bec Taylor School of Music among other musical endeavours. Nick Peddle is obviously guided exclusively by his name and went from drums to road race cycling. I guess he’s also guided by his strong legs. I saw a photo of him on a podium. Impressive legs. Ramsay Nuthall fronts Hi New Lo down in Melbourne, they’re uniquely great and will be playing with us at the Phoenix. I’m Chris Endrey and I’ve been touring as a comedian a bit, but I suspect I’m not that funny so I’m still playing music and put out a solo album recently. And one with PAINTonPAINT. Two more coming too, can’t wait. This is like a pissweak version of the end credits where we get to montage where everyone is now.

What song are you most looking forward to performing together again after such time apart?

We don’t historically do set lists so it’s hard to know. The best ones are always just the right ones at the right time. I think a song Bec sings, ‘Ozymandias’, is the best we’ve ever done. It’s not recorded sadly, but it’s worth the price of admission alone. There’s also a dumb song called ‘Dreamers’ which is honestly 1:1 just a Bruce Springsteen power ballad. We sometimes play it in encores, it’s got like, four key changes. Fingers crossed.

Have you got any new tunes for us, have you been working on much new stuff?

God no. I can’t speak for the others, but I am always writing songs that I would love to bring to the world via Fun Machine, but we’re spread across the country and it’s too sad for me to hold them back when we play so rarely. I’m sure we’ll put some small bit of new stuff together for this show, but it’ll just be done on the day. Which, in fairness, is how we worked new stuff when we played all the time. So who knows.

Do you  consider yourselves a Canberra Icon? (re: the name of  the event)

Of course not. No. We just always have themes for our shows and I like to think of opportunities to do things you don’t get to see elsewhere. This has led to a lot of paint, nudity, painted nudity, a projected Nintendo 64 and once two masseuses for the audience. But this time I’m just hoping we end up with more than one person coming as the MagnetMart guy.

What has been Fun Machine’s favourite gig?

We played with The Darkness which was pretty surreal but, as bands always say, the first ones when we were learning how much we loved to play were the best. Sweating in the packed old Phoenix or the Polo with your dearest blood friends by your side and a sea of smiling faces all singing along are memories that are so joyous they make me feel grave-ready.

Who is your stylist?

I remember learning that a Canberra band had a manager who was telling them what to wear and I spat my weet bix onto the back of my disgusted hands. They’re rich now. Good for them. Do you think we would be so uniformly tasteless if we had a god damn stylist.

What is your favourite thing about the Canberra music scene (or Canberra in general)?

I like that it’s big enough to have lots of people trying different things, and small enough to have everyone doing them in the same spaces together.

What about your least favourite?

I hate how rare it is that any of the uniquely great music that’s made here is reflected in our public culture. Cafes, commercial radio, sports matches, whatever – all great places to celebrate what we have and almost always playing some seppo trash. Except for Smith’s, of course.

If we were to start calling ‘Canberra’ something else, what should we call it?

I reckon the name’s good. That said, ‘North Lyneham Shire’ has a fair ring to it.

I feel like it’s not everyday you get a world grade athlete from Watson and I hope Nick Kyrgios reads this and comes to the gig. Or at least his mum.

Dress as your Canberra icon for FUN MACHINE’s CANBERRA ICONS PARTY. Friday February 9 from 8pm at The Phoenix. Tickets are sold out.