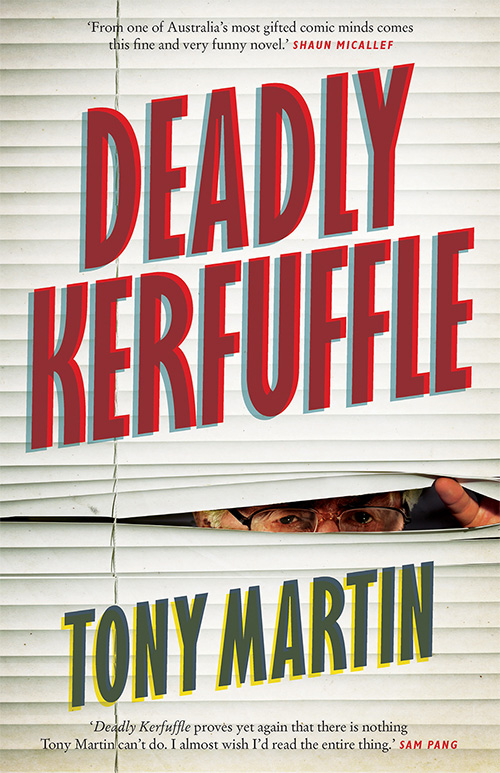 Deadly Kerfuffle. The happy answer to the question no-one’s been asking – what’s Tony Martin up to these days?

The latest comedy offering from Martin (of Martin/Molloy fame), Deadly Kerfuffle kicks off in 2006, in an Australia that’s settled uneasily into a post 9/11 rut of fear and suspicion. An impeccably nuclear Maori family moves into suburban Melbourne, to be immediately branded Muslim by some locals that have predictably shallow opinions about Muslims. The whole suburb is deftly sucked down in a swirling failstrom of paranoia, crossed wires and bad decisions.

From the outset the characters aren’t just believable, they’re as recognisable as your own neighbours and co-workers. All the flavours of local nutbar are present – the fedora and greatcoated know-it-all, the reds-under-the-bed Dad’s Army type, the stalwart neighbourhood watch crone whose position enables her to stickybeak and meddle. The festering pot of rumour and conspiracy is presided over by a shit-stirring shock jock, whose intelligence sits somewhere ambiguous between the affected idiocy that gets him ratings, and the estimation of his rather generous self-opinion.

Less immediately recognisable but still welcome is the put-upon intelligence director who manages to be at the top of the food chain and the bottom of the shit heap simultaneously. While he’d be more at home in the pages of a Joseph Heller or Evelyn Waugh wartime romp, Leon Weekes’s determination to uncover terrorist plots whether or not they exist adds a sense of scale to the escalating ridiculousness.

Deadly Kerfuffle is good-natured and gentle in the way it teases out the threads of illogic that underpin casual racism. It also pokes fun at the players in the circular argument of media complicity. Who is more responsible? A shock jock that exploits the market for prejudice with misinformation crafted to outrage; or the audience so addicted to being whipped into a rabid froth that they ensure outrage is a sustainable business model?

It’s funny, in a quiet nose-snort way, and it clips along at a mostly attention-holding pace, although it does dissolve into an oddly lingering, unhelpfully neat wrap-up at the end (think J K Rowling’s awkward Potter epilogue).

It is also disconcertingly accurate in its depiction of some of middle class Australia’s least inspiring phobias. Honestly, if you’ve just spent Christmas doing the dance—you know the one—of trying to preserve a shred of dignity whilst disentangling yourself from conversation with your lightly racist in-law/nana/uncle, and all without ruining lunch, maybe give yourself a couple of months before picking this one up.