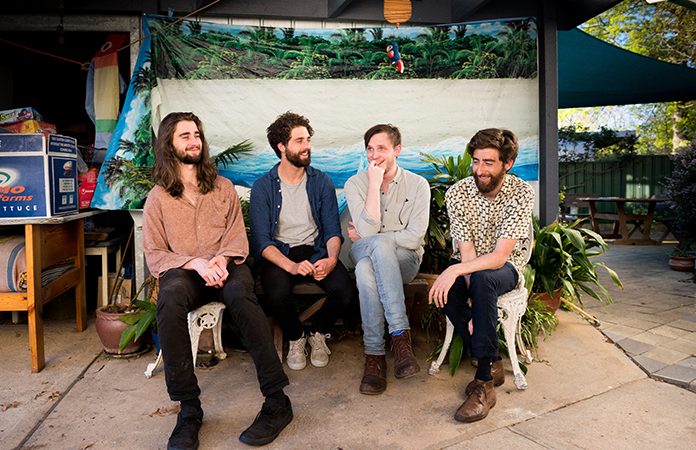 As a concept, the rock ‘n’ roll sharehouse is both romantic and maligned, and eclectic indie-dreamsters SLOW TURISMO have forged themselves a place ideally in the middle. There’s a homey feel when I walk in as stacks of LPs, a wonky merch-wearing mannequin, nips of whiskey and bassist Louis Montgomery’s gold records adorn the front room. The inhabitants are the three Conway brothers Max, Sam and Riley, and their childhood friend Montgomery,  inconspicuously harbouring Canberra’s sharpest pop minds.

In the past if we had something finished we felt compelled to release it whereas now I think the mentality is if it’s not good enough, it’s not ours

The quartet have been intricately moulding their multifarious indie for half a decade, forming on the ashes of university bands Rubycon an­­­­d Elisha Bones, the former once attracting Richard Kingsmill’s attention on Unearthed. Sam laughed when regaling that Kingsmill took an exception to the brotherly band’s reference to Kings of Leon, and left a sarcastic comment before ambushing them during an interview with triple j.

Homeshake and Connan Mockasin’s discographies are the records currently haunting Slow Turismo’s halls and it’s an influence they wield with relish in shaping their latest single ‘Pistol Powder’. The track is a studio pastiche of wavy synth-texture crafted with a forensic ear for melody and the purest distillation of their collective identity so far. Closely following the joyfully doleful ‘You Were Dead’ from earlier this year, the band have truly started to all “sit in the same world” according to Sam, enthused by extensive time in the studio.

“The process of fine-tuning a song from when you start in the jam room to the studio doing the final touches at 2am, that’s where it really gets fun. When you’re performing live you’re mainly feeding off that energy,” comments Max, Sam adding that he didn’t think ‘Pistol Powder’ would have been a single if it was gauged on crowd reaction.

“Being in the studio just by ourselves recording ‘Falter’ was a big turning point. Refining the recording process helped inform the way we approach things. Which helped homogenize and radicalise a bit I guess,” Louis deadpans. Louis’s sound engineering pedigree pins the fascination down to the “gratification of working out how a song can exist in a computer.”

The single was produced by friends and fellow Canberrans SAFIA, who pulled at the band’s “unruly” studio dynamic.
“They’re real good at identifying those songs with a hook or a section,” says Montgomery. “We maybe previously wouldn’t have done something like a double chorus. He just went, ‘nah, do it again,’ and we said ‘whatever you say.’”

Slow Turismo thrive in a sectional approach to music that chops things up before injecting the kind of hooky sugar-rush that makes angular tracks like ‘Pistol Powder’ so vibrant. “It’s fun to take things pretty raw and unpolished and get the vibe from everyone to steer it in a completely different direction.”

The release is also the first since they won the triple j Unearthed competition to play Groovin the Moo earlier this year, an experience the quartet maintains is their favourite yet. Sam lamented the festival of nerves that came with it, which a solemn listen to Carole King’s ‘Natural Woman’ brings pre-show attempted to calm.

“It was scary,” he says. “I was losing my voice. I was gargling whiskey on stage just before we went on because I sing one song that is really low register-falsetto that is just so prone to testi-pop. One out of three runs backstage was just awful. Luckily, I kept it together and had a great set. It must have been just before Methyl Ethel got really popular, they were playing right after us, so there was really quite a decent-sized crowd.”

“All waiting for Methyl Ethel. We’ll take it.” Max interjects. A particularly worldly sound guy named Stu coached them into pulling off the mesmerising set that followed. However, Stu was not able to coach them on festival backstage etiquette.

“There were certainly a few awkward schmoozing interactions backstage, hanging with the big dogs,” Sam laughs. “I went over to Methyl Ethel and was like ‘hey guys, awesome show, been listening to your albums heaps, it’s bloody great!’ And they were all like ‘yeah cool, thanks man… alright, have a good day!’ That was probably the most composed we were all day actually.”

Pressing for more lurid details, I was met with mostly tight lips. “Oh, I won’t get into that,” says Sam.

“At the afterparty I met the guy who owns the festival and that was like––” starts Max.

The size of the audience was a welcome change, differing from the 100-person capacity of most Canberran venues, and I let the band muse upon the thought of greater opportunity in bigger cities. Louis however, takes a fairly staunch approach to being a Canberran musician.

“There’s more and more going on in Canberra all the time. Those bands that use Canberra to get a name, you were built here, stay here. Give back a bit. Fuck you.” The comment is laughed off, but the passion is real. Slow Turismo’s soundscape-pop grows more panoramic with each release, and their focus narrower.

“In the past if we had something finished we felt compelled to release it whereas now I think the mentality is if it’s not good enough, it’s not ours,”  Louis asserts. Slow Turismo are an album away from meteoric stardom, so don’t miss out.