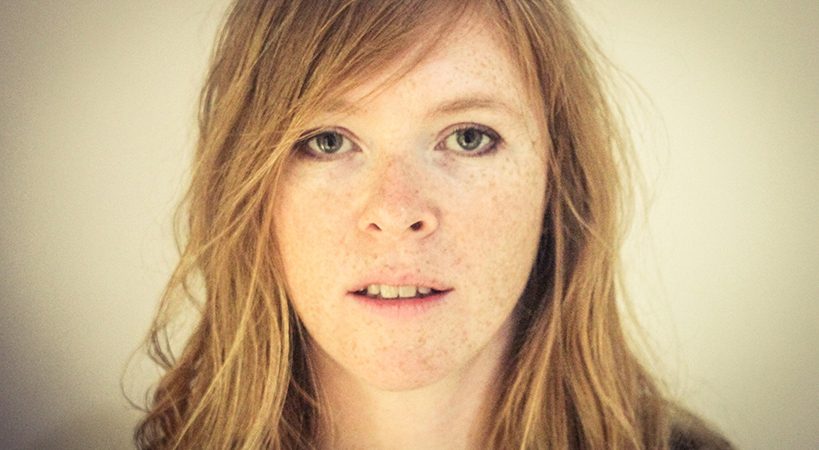 A sonic diary, a blurring of studio and live performance, a slowing of time – this is the latest release from HAPPY AXE, her debut album Dream Punching.

After years of playing first violin but second fiddle in dozens of Canberra bands, Happy Axe (Emma Kelly) has firmly established herself as one of Canberra’s most exciting electronic music artists. In her debut release, the 2015’s This Topia EP, she decisively set out a unique sonic space for herself with violin, saw, singing, and electronic manipulation of sound and has since toured Australia, Europe, the United States, and Japan. Now she is launching a full album, a continuous sound journey of six songs, featuring original lyrics inspired by late-night conversations with friends. You may have seen her playing on Canberra stages for years, but this is the first time you will hear what she has to say about the world.

I want people to listen a bit more. I love listening to music where I’m like, ‘what is that?’

“It feels like I’ve got a little diary of all my thoughts and experiences and interactions with friends over the last two years. I guess it’s the romanticised version of my life in a way. You’re always going to remember the really big things. It’s just the cute little conversations you have and musings that you have with a friend over a glass of wine.”

Happy Axe and I are discussing her new album over a glass of Savvy Bee, and yes we are cute, but more importantly we are two clever women talking about making art, in this case music. I keep wanting to dig in past the poetic vagueness of lyrics but Happy Axe tells me vagueness is the point.

“I think when you listen to a song and it’s too specific, you can’t put yourself in it. [My lyric writing is] about inviting people in to understand it on whatever level they do. It’s not even that vague, it means something specific to me and I know what it’s about but it’s phrased verbally in a way that doesn’t cut off people from having their meaning in it.”

Singing her own words is one of the ways Happy Axe’s work has evolved since her EP, fuelled equally by the desire to connect with her audience in a new way and to experiment with new sounds, the textural and musical quality of words. However the main point of growth is a new drive to the music, a deeper, darker, more forceful quality.

“The sounds are a little bit more uncomfortable – wobbly, wonky, low sounds. The other one was a bit more violin-y and lots of high layers and this one’s sort of got a bit more depth and a few pretty out there sounds where you don’t know what the hell it is. I don’t like using sounds that are really accessible, I want people to listen a bit more. I love listening to music where I’m like, ‘what is that?’”

The process of making an experimental pop album seems to be a lot about blurring the boundaries between all aspects of creation. Happy Axe makes recordings as part of the composition of the songs and then she mixes those sounds on stage with live singing, violin and saw music. When you see her perform you are witnessing a blurring of studio and stage, musicianship and technical genius. Happy Axe tells me about the weird sound technique she’s been perfecting which inspired the name of the album.

“Dream punching itself, it’s that feeling when you’re in a dream and you’re trying to run away and you go really slowly. Sam [King, co-producer and Kelly’s partner] actually gets this thing where he’s trying to punch someone to defend himself and it will go really, really slowly and it’s super frustrating. I came up with the title because I was doing a particular sound technique where the violin pitch was rising, because I was playing a note that was getting higher, and then I was turning down the frequency on the knob at the same time. [The sound] never gets there.”

The slowing of time is an important experience of the album. Happy Axe tells me she wants to give her audience “an excuse to do nothing but listen for an hour. It’s one of the only times that we actually stop and focus on one thing for a long time. We’re always rushing to the next thing. This is like a nice space to just sort of stop and listen and think.”

In an exciting but frantic digital age in which we are rapid-fire producers of enormous amounts of intellectual content, the act of stopping and listening is a significant political act. I tell Happy Axe this and that I’m pleased she’s giving people the opportunity to engage in deep listening. She laughs and says that ultimately she hopes the listening experience is inspiring.

“I really love feeling like anything you listen to might spur on something positive. I hope if people listen to it they might think, ‘I’ll do something from there.’”

My final burning question (apart from Happy Axe’s star sign, which is Pisces, which she tells me laughing hysterically at the question) is about the name she has chosen for her dreamy, ambient, experimental pop – what is the meaning of Happy Axe?

“You know how people refer to their guitar as their axe? I remember once this cool guy at school said, ‘Have you brought your axe?’ And I was like, ‘What?’ ‘Your violin.’ And I just thought it was really cool that my violin was considered an axe.”

I press her about the ‘Happy’ part. She grins, “I do think about the fact that I smile a lot. When I was in America people were seriously scared of me because I smiled so much, like especially in New York people would be halfway through a conversation and they’d be like, What? What? You’re so smiley! I love your smile, why do you smile so much?”

So the axe, the smile (and ultimately the music); is it a tool or a weapon?

“Definitely more of a tool.”

Liked it? Take a second to support Cathy Petocz on Patreon!

Support Cathy Petocz on Patreon!
12% complete
When we reach $500 per month we will begin the official BMA Podcast. This will include interviews with some well-known musicians and artists, tips and tricks for publishing in print and online, as well as other discussion topics around Bands, Music and Arts in Canberra!