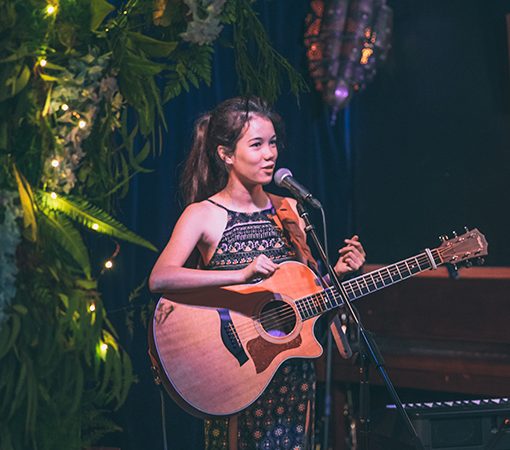 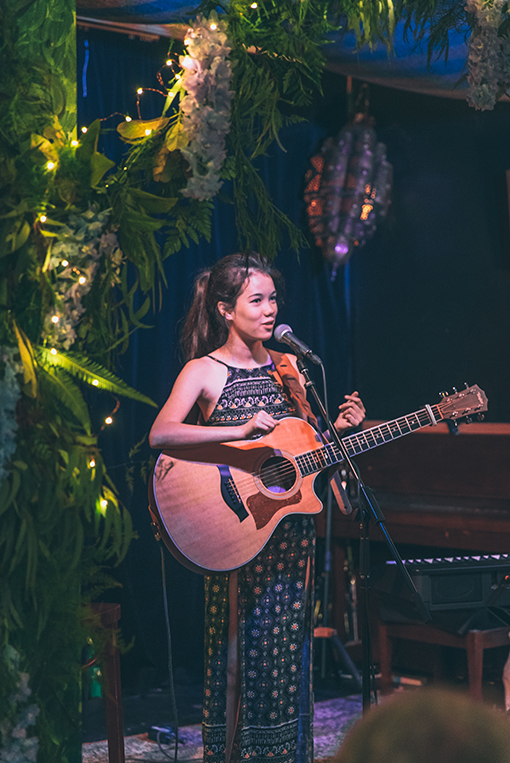 “That shouldn’t be a problem,” is the reply from LUCY SUGERMAN’s mother/business manager to my email about interview times. I’d suggested 11am, thinking that vaguely morning would be ideal on the day in question but not considering the matter too deeply. In the back of my mind though, it did occur to me that I might interrupting the singer-songwriter while she was in class.

The morning plays out more or less how I planned it, and Lucy Sugerman answers my call, a couple of ticks past 11:00am.

“I’m just at school,” she says. “I have English. But I told my teacher this is happening so I get out of it. We’re studying this book called The Sparrow Garden which is like a memoir.”

The book is Peter Skrzynecki’s story of a migrant childhood. Sugerman and I both drew the comparison between her class and ‘Reach Daylight’, the last song on her Hilltop Sessions EP. It’s feels as though I’m back in Year 10 English.

“We study poems and they’re so thoughtful and every single word is a link. When I write songs–– It’s funny seeing all these links. But it’s interesting, seeing what people get from songs.

Songwriting and performing are at the top of Sugerman’s list of priorities, always with a mind to better herself as a musician and a person. It makes sense, considering she’s not yet out of high school. But she is branching out – her parents are showing her the ropes of managing a business, and, come December, she’s curating her own show. She’s stepping out into the world of audio production too.

“I recently saved up heaps of money and got myself a little home workstation,” she says. “I’ve been watching all these YouTube tutorials on Protools and, you know, really starting to listen to the production of things I like. Listening for things I mightn’t’ve heard before, listening carefully and trying to write more instrumentals and production elements for my songs rather than it being just vocals, guitar, melody and lyrics.”

It all seems to be part of a wider trend in Sugerman’s work of late; one of making things bigger and taking her music further. It’s all coming together for her aforementioned headline show at The Street Theatre.

“I’ve never done anything like this before. I’m getting a band and everything, a four-piece band. I’ve always been an acoustic solo artist. It’s always been me by myself and so now I get to do the songs how I’ve never heard them before. And I pretty much have no idea what I’m doing, and I’m winging it, but it’s been a very cool process so far.

“I guess I’ve been doing the same thing for a long time. I started when I was nine, I was always on my guitar, on my keyboard, playing these songs that I wrote and I figured, after the stuff that has happened to me and people seeing me with a band on bigger scale productions, on TV shows, things like that, I wanted to do something new, cos I never want to stay the same and I always want to be improving myself because I still have a long way to go.”

She says the last point with defiance, as if it’s her personal mantra – keep moving forward, never stagnate, always keep developing. It’s a work-ethic that’s establishing her an early-career foothold in a notoriously daunting industry, and it’s already seen Sugerman taking out the Australian Busking Championships and making it to the final weeks of The Voice.

“Everything really,” she responds, when I ask how she sees herself – as a songwriter, performer, producer – going forward. “Within the next five years, I hope I would’ve made an album that I’m really proud of. And I hope to start doing shows outside of Canberra too, once I finish school and can go places. But yeah, I’m still in school. So I’m really open to anything that comes my way. Be open to anything, try get as much experience as I can, and just better myself. That’s the plan anyway.”

“My family are incredible. I could not have asked for a more supportive family. It’s actually crazy. My dad pretty much gave up his life for ten weeks this year for me to go up to Sydney and go on The Voice which is so incredible. And the fact that he’s able to do that, willing to do that for me is a huge testament to how much they support me as long as I hold up my end of the bargain and at least try to do well in school.”

But even a goal-oriented mindset can’t distract a high-schooler from discovering the music that they love.

“I am a huge fan of Gabriel Aplin,” she says. We then talk about Sugerman’s reaction to ‘Look What You Made Me Do’. She’s rightly unapologetic – mature in her assessment of the controversy Taylor Swift inspires these days – but indignant at the same, that the artist who inspired her to start writing could ever be slanted.

“Look! I mean, I’ve just been a huge fan and seen most of the things that have happened to her in the public eye over the past few years. So I really got the song, it was all about her response to all this terrible stuff she’s had to deal with, and all the mistakes she’s made as well. So I liked the message of the song. It’s fun to dance around to. The song, it’s not the best, but the music video, that was clever. I mean, I think she’s really happy with everything she’s doing. She’s having a good time.”

It all makes me consider how much thought Sugerman puts in to the kind of artists she wants to surround herself with as she embarks on her career.

“Oh my gosh. That’s a really good question. I mean, I guess… I actually have no idea. Especially for me, I haven’t had heaps of experience with producers. I’ve gone to studios and I’ve met some amazing people, but I think I’m still yet to meet the person that I work really well with. This guy called Maynard Gold, he’s in Canberra, I love doing my acoustic stuff with him, he’s fantastic. For a full-scale album with everything, I think I’m still yet to meet someone I work well with. But we’ll see.”

LUCY SUGERMAN and her band are set to play The Street Theatre on December 3 from 6pm, supported by AMBER NICHOLS and SOPHIE EDWARDS. Tickets from $25 via thestreet.org.au.