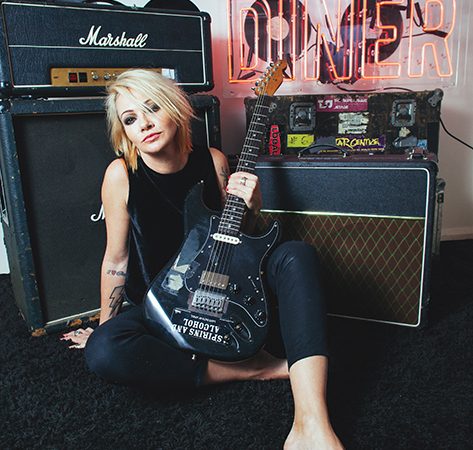 It’s at this time of year that I can’t help but think about what I actually look forward to about Christmas. The first thing that comes into my mind are the movies and TV shows I’ll binge watch with Mum while we recover from the residual Christmas tension – nursing our food babies. For SARAH MCLEOD, last year’s Christmas was signified by a household classic – the Rocky Trilogy. Why am I telling you this? Because it planted a seed that would come to fruition a couple of weeks later, at a restaurant in Little Italy.

“I watched all of the Rocky movies, back-to-back with my Mum at Christmas before I went over there,” says McLeod. “So I sort of had Rocky on the brain. Having to write this whole album in three months became like the biggest challenge of my life. It was like the big fight and I was Rocky.”

Sarah McLeod gave herself three months to write her new album, Rocky’s Diner. She resisted the he temptation to scrub up old demos, beginning writing on the 1st of January with an entirely clean slate.

“Time breeds contempt,” she laughs. “I normally get cold on albums really quickly. Once I get to the point where I could put them out there I’m already sick of them.”

For me, the diner concept really sparked my imagination. I was one of those kids that obsessed over Grease, so songs like ‘No One Wants to Be the First to Say Goodbye’, with that swinging 50s feel, took me back to the milk bar in that film. The singles ‘Wild Hearts’ and ‘Giant’ place Rocky’s Diner in later eras, but the narrative stays firmly in the ground.

“I was stuck on a song and went to have lunch in Little Italy. I was sitting in a restaurant with a red and white table cloth, I see Dean Martin on the TV, they were playing Sinatra and there were pictures of all the old crooners on the walls. I’m imagining Little Italy in the 1950s and all of the comings and goings around it and the people connecting with each other. The kind of place where people would come in and talk to the restaurateur about their problems, like a lonely hearts club or something. That was when the penny dropped and I had the whole vision for the album. I had a vision of a drive-in movie theatre and the screen said ‘coming soon, Rocky’s Diner’. After that I just ran home and started writing the songs that would later become the two songs that bookend the album.”

Rocky’s Diner is the kind of album that you think could have been written on a holiday, possibly collaboratively, with many different personalities weaving their way in and out of the picture. But I was surprised to learn that McLeod wrote this album in complete isolation.

“Completely solitary. So much that I didn’t even send songs back to anyone at the label. I didn’t want anyone’s opinion I just wanted to be completely left alone. I went somewhere where I didn’t know anyone, it was snowing and I just sat in this one little room for three months. I just dank heaps of beer, ate a lot of ham, and I wrote the songs.

“There was a 7/11 around the corner that sold all of this yummy fresh ham and beer. I couldn’t be bothered going any further than that because I felt I was always in a hurry – I had songs to write.”

She explains that drinking played a big part in the process, but knowing when to drink (and how much) was extremely important.

“If you drink too much too early, you start losing interest, you get sleepy and the focus is all wrong. A couple of beers, a couple of coffees and just work through the night until morning.” You get the idea. It sounds like a dream. Working in this way in a city like New York is something many artists dream of. I couldn’t help but wonder whether it ever got lonely working by herself for so long.

“I was so intensely focus on what I was doing, it was all-encompassing. I didn’t even have time to make phone calls because I was so into what I was doing. It just became everything to me, it was really exciting and I felt really good.

“After three months of it though I did start to go a bit nutty.” It’s a relief for me to hear this, I was starting to think Sarah McLeod might just be super human.

“I still got some good songs out of the insane moments. There’s a part in the record about me banging my head against a wall and losing my imagination. It did all get a bit much for me at one point but I worked around that, harnessing it into the music so it was almost like a diary of my life at the time.”

Like a modern day Kerouac, McLeod hit the road with her dog Chachi, a giant neon sign and a double necked bass/guitar hybrid that she designed herself. You only have to watch her film clip for ‘Wild Hearts’ to get the idea. The black and white aesthetic, the worn-down streets of Sydney contrasting the with a deliciously sleek 1960s Ford Galaxie 500. The dog in the clip is her baby girl Chachi who she has taken everywhere on this tour. She even brings her out on stage.

“What I was trying to get across in this clip was this sense of freedom; driving into the sun in this convertible and trying to find inner peace. I wanted to have Chachi there because an animal has the most beautiful sense of contentment, and that’s what I was trying to talk about – finding your inner contentment. You can give her a cork from a wine bottle and she’s just stoked”.

You can tell from her tone just how much Chachi means to McLeod.

“She was attacked by a bulldog in the street a couple of weeks back so I’ve given her a bit of a rest since then. I just threw myself on top of the bulldog and wrestled it to the ground, flattened it under my sheer weight. It was really scary.”

SARAH MCLEOD and Chachi hit The Basement on Thursday November 20 as part of the Rocky’s Diner tour. Tickets $28.60 through Oztix.

Liked it? Take a second to support Hayley Manwaring on Patreon!

Support Hayley Manwaring on Patreon!
12% complete
When we reach $500 per month we will begin the official BMA Podcast. This will include interviews with some well-known musicians and artists, tips and tricks for publishing in print and online, as well as other discussion topics around Bands, Music and Arts in Canberra!