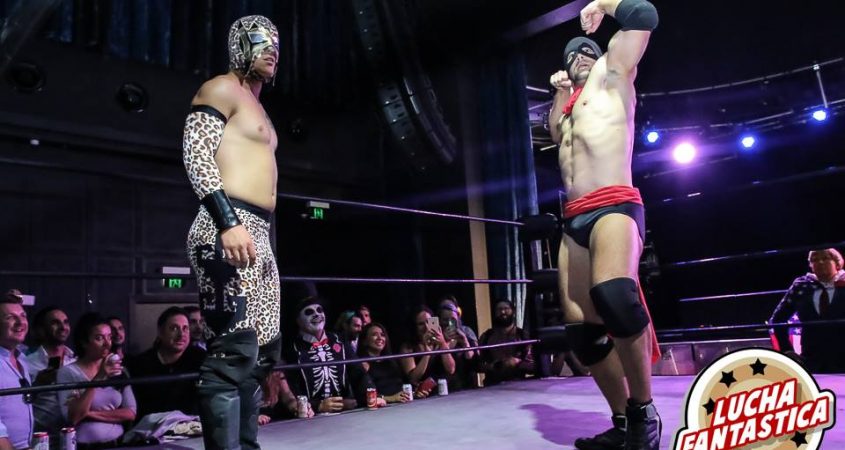 Victor Diaz is a passionate man. This much is clear from the moment we start our conversation. He’s on hands free in his car – in transit between Lucha Libre engagements I imagine – and we’re chatting about the DAY OF THE DEAD BATTLE, the cabaret-meets-WWE-meets-Latin American history lesson that he’s bringing to Canberra as part of this year’s Day of the Dead festivities.

It’s more than just a wrestling demonstration, this much I know, but I soon discover I have a lot to learn.

“I mean the main idea is obviously Mexican wrestling,” explains Diaz. “But it’s a complete Mexican cultural experience. I’m from Mexico myself and we also have a Mexican party together with the Mexican wrestling.”

“Since I was a kid I was into Mexican wrestling. For Mexican kids, Mexican wrestling is kind of like our Mexican superheroes. Like, Americans will have Captain America and Superman. In Mexico we have Luchadors, these masked wrestlers. Some of them they used to have films where they were fighting against vampires, zombies. Things like that.

“So when I was growing up I was always interested in that. But you grow up and you kind of forget a little about it. But when I moved to Australia I was importing Mexican hand-decorated masks. I was selling them in summertime at the Queen Victoria Markets. This one day a woman arrived and she asked me if the people were wearing the masks in Mexico and if it’s a Mexican fetish. And I started laughing, until I realised she was actually serious. And then I explained it to her and she really liked the idea behind it.

“Back in those days, this is maybe five years ago, I was already organising Latin parties in Melbourne. And I thought, ‘what about doing a Latin party but this time with Mexican wrestling?’ and that’s how it all started.”

The multi-faceted nature of Mexican wrestling makes it difficult to categorise. At first glance, it’s a sport, albeit a flamboyant one. But there’s drama as well, and a depth of culture in the way the masks are created and held in sanctity. Diaz’s parties bring an element of cabaret to the spectacle too, with music and acrobatics. I ask him where it sits for him on the entertainment spectrum. “It’s actually a mix of lots of things,” he says. “It’s a sport, but at the same time it’s got that element of show and that element of entertainment.”

As one of the uninitiated myself, I ask Diaz what to expect when I walk into the German Club to see a newly-erected Mexican wrestling arena in the middle of the room.

The Day of the Dead Battle forms part of a wider celebration of Latin culture taking place around town on November 4. Over at Ainslie Arts Centre, the Day of the Dead Fiesta will see live music, art and food before the over-18s head to the Harmonie German Club for the grand battle at 9pm. But Diaz and his crew will be at the festival during the day, putting on rousing wrestling demonstrations and spreading the word about Lucha Libre culture.

Diaz pauses for a moment, considering how much he ought to let slip about the day’s festivities. “Maybe I shouldn’t be telling you more about it, keep it a surprise,” he continues.

It doesn’t take much from me to twist his arm. I get the sense Diaz is a showman in the non-wrestling parts of his life as much as in his work.

“Oh, why not,” he says, finally. “We’re gonna give them a mask from a Mexican wrestler as part of the completion. That’s going to be a lot of fun, both the demonstration and the show. And this is the first time we’re going to Canberra, so we’re really looking forward to it. It’ll be good fun, we’ll have something very special prepared for Canberra. “The venue gets transformed into a Mexican arena for the show. But we’ve been doing it for years, we’ve done it in Melbourne, we’ve done it in Sydney. We have done it in China as well, in Singapore too. So yeah, we have all the logistics worked out so we can give the best experience to people. We can make it feel like it’s not just a show but a complete spectacle. And then of course there’s the party element to it as well.”