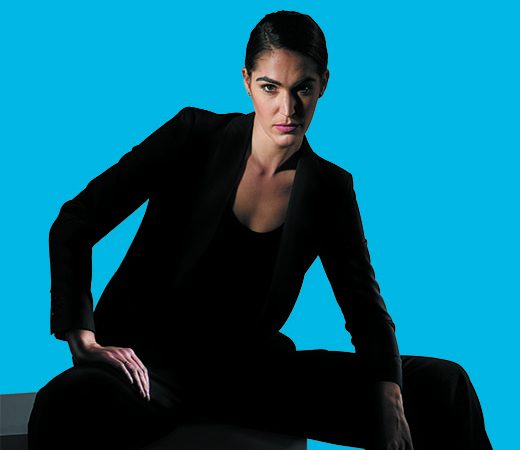 Pippa Grandison is on her lunchbreak. It’s day two of rehearsals for BOYS WILL BE BOYS, the bitingly satirical play that delves Wolf of Wall Street-style into the ‘man’s world’ of the trading room floor.

“It’s a bit of a, well,” says Grandison, pausing to think. “I can’t say that word, can I? It’s a bit of a, uh, brain explosion at the moment, because we’re working through the text and there’s a lot of it. But it’s great, it’s really fun. A great bunch of people and all women in the cast which is new for me. I’ve never been in an all-female cast before, that I’m aware of.”

Grandison plays Astrid, the ruthless trader who looks back down the career ladder at the pieces of the glass ceiling she’s burst right through. Astrid is fearless and driven, but constantly conscious of the way in which she holds herself, continually aware of the men breathing down her neck. It’s apparent that working with an all-female cast brings a different dynamic, but it’s tricky for Grandison to pinpoint exactly why.

“It’s more of a feeling, more of an interesting place,” she says. “I mean, in this industry everyone’s pretty loose and open with each other. As actors we’re kind of born that way you know, we operate from an emotional place all the time and nothing’s really off limits in conversation in my experience. It doesn’t feel any more safe or any different really, it’s kind of an intangible thing. There’s maybe a comradery, or a deeper understanding of each other.

“She’s completely the opposite to me,” says Grandison, reflecting on her relationship to Astrid. “She’s the flip of me. I know as actors we play other characters, but quite often you’ll find something in those characters that’s like you. But in terms of who she is, how she approaches the world, She’s a very, very powerful, confident, unapologetic woman. She’s in your face and just doesn’t care what you think. And any kind of vulnerability she has is buried so deep that you almost can’t see it, find it.

“Pippa, me, I’m kind of the flip of that. I’m an open wound, my emotions – it’s a heart on sleeve kind of thing. And to be completely courageous and walk into a room and own it with confidence is an unlikely event for me. So that was exciting. It’s quite empowering playing a woman like that. I’m finding inner strength that I haven’t really had to dig for before, so that’s great.”
For Grandison, the process of inhabiting a world and a character goes beyond the personal connections. Coming in on day one and sitting down with the creative team – the set, costume, lighting, music and sound design – becomes one of the most vital and rewarding aspects of the production.

“That’s why I like doing theatre in smaller spaces sometimes,” she says. “Everyone’s in there together in the trenches. Theatre, that’s what its’ supposed to be about for me, I know that sounds a bit wanky, but the craft is such an exposing place to be, depending on the character. And when you feel you’re part of a big team and everyone’s working together and you can have input and share with each other then it becomes a safer place to expose yourself in a way.

“It’s of the utmost importance what the creative team does when you’re an actor. How you’re lit can determine a mood. It’s your space as your character, it’s where you live, where you work, these are the spaces where you spend a lot of time. And in a way, it kind of forms who you are for the audience. Everyone’s reading the piece and finding their space within it. We’re all in the same boat I guess.”

“Yesterday was a bit of a whirlwind,” says Isha Menon. “Already Caroline [Stacey, director] has done a lot of work setting up the design and the atmosphere. So we went from 10 to 6:30 without even really realising the time.”

Menon plays Priya, a junior on the trading room floor who finds herself under the mentorship of Grandison’s Astrid. Like her co-star, Menon sees the almost immediate sense of comradery within the cast an abstract but vital part of bringing such adversarial characters to life.
“I feel yesterday it was strange in a good way,” she says. “Halfway through the day it was just weirdly familiar with everyone. And I think you need that in this sort of play because it is so bitingly satirical, and it’s got really black humour.

“Already when we did a read through, it’s very intense. So it’ll be really great to have that real companionship and friendship in the cast to balance what’s probably going to be a pretty tense atmosphere when we actually get up there. I’m hoping that’s what will happen.”

In a play filled with dark humour, navigating the tension between the contextually unapologetic and stepping over the line falls largely to the actors and their tone.
“There are so many moments like that in the play,” Says Menon. “Because it’s so satirical – people will be making jokes about suicide, about all sorts of things where you find yourself laughing, and you feel bad for laughing but you can’t help it because it’s just so bad.

“I think there are a couple of points in the play where the joke goes too far. The scene for me that’s really heavy was the scene where my character, Priyah, has to approach the main character, Astrid, after being raped at a party and telling her that she’s going to go to the police. But Astrid just keeps up the tone of the play, completely making light of it, saying ‘oh, you just had a bad night of sex’, making jokes about it. And that for me was the scene, when we read it yesterday, that I thought was really intense.”
And Melissa Bubnic’s script doesn’t “prettify” any of it. It’s a balance that, when struck, shines a light on the often stark reality faced outside the world of the play.

“The finance world is a great setting for the play in that it’s much more obvious and it’s much more seeable,” says Menon of the parallels between Boys Will Be Boys and the theatre industry itself. “With Astrid, there is this very conscious way in which she sculpts herself and behaves. But yeah, I would say that in places like theatre, it’s not as overt but there is definitely a sense, there are pockets of it.

“I’ve been lucky in the places I’ve worked in, I’ve been able to feel safe, but there are definitely spaces where you do sense that people are kind of expecting you to behave in a certain way, or change yourself in a way, and you get kind of ticks when you tick off that list of ways you’re supposed to behave. And it is kind of a power play, when you feel like you almost have to pit yourself against maybe the only other woman in the cast just to get approval and power.”
Boys Will Be Boys appears, in many ways, to be a dramatised power-play, using the created universe inside the theatre to draw out those merciless corners of the professional world.

“I would say it’s that way pretty much anywhere in the world.”

­­­BOYS WILL BE BOYS runs between October 27-November 11 at The Street Theatre. Tickets from $30. Visit thestreet.org.au for more performance times and tickets.