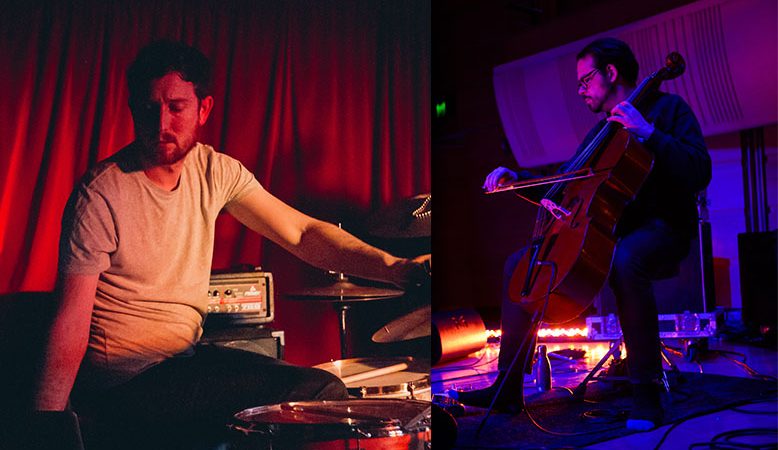 IN THE DARK OF NIGHT

Evan Dorrian: The new raven album is beautiful and I’m not just saying that cause we’re in a band together… There are many intriguing things about it, but first I want to know about the album title the night is dark, the night is silent, the night is bright, the night is loud – it captures the mood of the record perfectly, but where did it come from?

Peter Hollo: For me, the music always comes before the titles. I guess it’s instrumental music, and to me it’s rarely descriptive, so as it came together, I started giving the tracks single word titles – compact, open to interpretation. When it came to naming the album I really wanted a contrast to that curtness. I think as well as the evocativeness of having a little poem as a title, I like the slightly transgressive nature of just pushing the length a little too far – although not quite to Fiona Apple lengths!

ED: The record is calm, minimal and spacious but not ambient at its – it seems underpinned by emotion more than anything else. Was there a narrative in mind and what was influencing you at the time musically?

PH: As a label, I shy away from ‘ambient’ as much as I shy away from ‘classical’. Of course, this instinct is unfair because there are elements of both in my music. Generally, I tend to gravitate towards slowly evolving musical forms and as a bass player (on the cello), I love ponderous dub basslines – which pervade drum’n’bass, dubstep, doom/sludge metal and other forms. Surprisingly, the only narrative comes from the fact that it’s all written by me, and from the way I curated the final album.

ED: In terms of recording and editing, how did you create this new raven album?

PH: For this album, I chose to record in a beautiful wood-panelled studio (the same at which Tangents was birthed seven years ago), with professional gear and a sound engineer. This was unusual for me as my usual process is a back and forth between recording/creating and producing/mixing. Ideas can be laid down, then chopped & processed before the next phase of overdubs and re-makes occurs. The loop-based pieces were built up one layer at a time in Pro Tools. The other pieces were recorded more linearly than I’m used to, with less scope for tinkering as we went along.

Much of the editing and mixing work was ceded to Chris Hancock, the talented & sympathetic engineer I worked with but in early 2017, I loaded all the stems into Reaper and performed some invasive surgery on many of the tracks, overdubbing noises and additional beats, re-structuring and re-mixing, bringing some of that messy, iterative auto-cannibalism back to the recordings.

PH: I’ve admired the solo work of both you & SHOEB (AHMAD) for a long time (longer than Tangents has existed) and was actually pleased with Spartak’s songwriting turn a few years ago – it was great hearing your voice as a songwriter (and literally as a singer) coming out there.

ED: Thanks man! When we spent time writing and arranging songs, we did it a similar way to what you described above, trying to keep the spontaneity but also going back in to do the “invasive surgery”. Since then I’ve been putting all my songwriting energy into a solo effort that has proved to be a mammoth effort… counting nearly four years in the making and still going. Shoeb’s been doing the same, with her solo album release imminent.

PH: Is the way Spartak’s music evolves and coalesces something that takes focus to achieve?
ED: Spartak is evolving or devolving to more of the free form guitar, drums and processing effort again but with all the new life baggage and experience that we bring along with us of course. It takes focus, but not on ‘achieving’ anything in particular aside from being in the moment. I’m sure we’ll change again before long and take an unexpected turn again.

PH: Spartak’s free and spontaneous nature is something that’s directly inspired me as a solo artist. I try to keep my musical background at arm’s length – rock, world, jazz, even classical music – and draw from electronic music and noise/drone/lo-fi, but I actually find it takes concerted effort to escape the formal and even melodic constraints of my musical origins. I’m interested in whether you’ve found the same – is your incredible tight-but-loose drumming style something that comes naturally?

ED: I definitely understand the need to try and escape your influences or the obvious associations that come from a particular instrument. My drumming in Spartak kinda did come naturally but also with that constant analytical voice wanting me to avoid certain things, whether it be playing in time, sounding too rock or jazz or virtuosic… it’s definitely all based around me trying to escape the drums somehow – which is ridiculous.

In fact I think that’s why I’m really drawn to your record as all the glitch elements help to throw things off kilter and change up the sense of context. But it’s very tastefully done – I love the spacious ‘Amen’ breaks that slip in and out. Bloody well done mate!

raven and SPARTAK perform at Drill Hall Gallery with ALPHAMALE on Saturday October 21 from 8pm. Tickets $10 at the door.