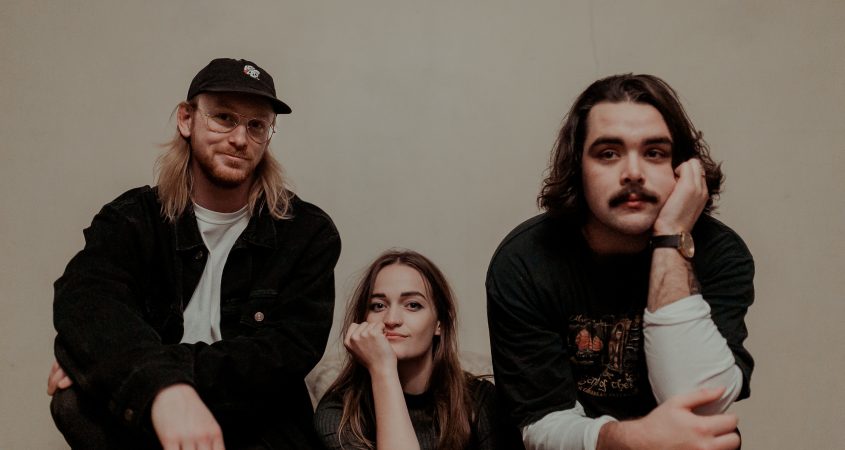 Affability is an underrated attribute in all musicians, and even more so in dance-punk. Acerbic ironicisms characterized the oh-so-self-aware personalities of the 2000s pioneering New York scene, but now that the early noughties are just faded memories of Crocs and rock revivals, it has never been cooler to be like Joab Eastley of Newcastle up-and-comers RAAVE TAPES, the mecca of indie nice guys. Preschool teacher by day, RAAVER, by night, Eastley is so overwhelmingly positive in conversation, its almost startling.

Overflowing with Novocastrian (a term for a citizen of Newcastle) patriotism, Eastley happily spends minutes to plug local bands; contemporaries, ankle biters and forefathers. Try as he might however, it’s impossible to ignore RAAVE Tape’s own raucous tunes as the most exciting thing currently coming out of the city; thundering danceability somewhere between infected garage-rock and dark electronica abstractions. They’re as much influenced by Gwen Stefani as they are Bloc Party according to Eastley, if not more Gwen. “I do a lot of cool dance moves which are heaps Gwen Stefani. I could be her Akon. All I know that she’s doing right now is being fifty and still looking amazing. She’s one of those people that just never age. Maybe she’s a vampire. Yep. Gwen Stefani is a vampire.”

“Gwen Stefani is a vampire.”

The band in their second incarnation (swapping in Lewis Horne on drums and Lindsay O’Connell on bass) are about to set out on their k-bye tour, scouring the eastern coast with their loopy live shows. “Our first EP was just three guys playing some music together, and we didn’t really have any idea about what we were doing. That sort of worked, and listening to it back we figured out what direction we wanted to go.”

k-bye is the purest distillation of the band’s enormity and twisted effect mastery yet; squelching bass and robotic guitar tics erupt, while Eastley strains to new vocal lengths on the best refrain of the year: “I don’t know what you said to me, but it sounded like ketamine.”

“I did the vocals heaps hungover, pushing through it. I’ve definitely got to a point with my voice where I can do that, cause back in the day I couldn’t really scream that well, or sing that high. Just through continuously playing so many shows, doing it over and over again, my voice has been pushing higher and higher. We’ll see how high it can go, hopefully I’ll end up like The Darkness one day.” Eastley is only half-joking, manifesting his own hare-brained throwback for its music video, The Saddle Club.

“I have really stupid ideas, and it’s someone else’s job to make them actually work. I’ve got to plug James Fox, he’s the director who shot all this stuff.  With ‘k-bye’ I was like, right, ketamine. Ketamine is horses, we need to do The Saddle Club…I called him, driving home, and just had this idea for the clip, and just rattled off this entire script and he was like okay, write that down and I’ll try to make that work,” he laughs.

Bizarro ideas like these certainly culminate in a boisterous live show, but Eastley emphasises a sense of care that is sorely missed from many performers: “Playing smaller venues without security, crowd control is a big issue for us. The safe spaces, Your Choice movement, we are really trying to get behind that. I love partying but we need to do positive partying. It does come down to the artist a lot … Halfway through a set I’ll go, ‘Hey! Turn to the person next to you and ask if they’re having fun. Are they having fun? Good. Let’s make sure that keeps happening. If they’re not having fun, you let us know alright.’ Never have fun at the expense of someone else.”

This approach to crowd control is emblematic of the caring attitude that Eastley takes to all manners of performance – as part of No-Fi records, RAAVE Tapes take a keen interest in diverse gig curation, something that puts ANU Bar and Greenroom’s recent gaffes in neat perspective. “With every bill we bring females and non-males to town because we don’t have that many non-male bands (in Newcastle). We have a few and they’re great but they can’t play every bill every week … it’s really great to be able to put them on that pedestal and show other young people in the city that it’s possible. “

Eastley’s grassroots fostering diverse groups of young musicians in a town the size of Newcastle resonates for frustrated Canberrans and our revolving door venue scene. “Newcastle doesn’t have community radio. We only have Triple J so if you’re not getting J play, you’re not really known which is such a shitty thing … We are trying to make Newcastle a bit of a thing, because we have been left off too many tours for my liking lately, so we’re trying to bring a few more to town.”

The kindredship runs even deeper with Canberra, having already been given the proper introduction to the capital’s nightlife by local garage punkers Marlon Bando. “They go hard don’t they? We’d never been to Canberra before, so I said to the guys who were keen to go out for a beer afterwards, can you please take me on a tour of Canberra? I wanna start with the cool nice pubs, and slowly degrade into places that you shouldn’t go. And it was great, we had some beers at some nice fancy places, where we felt silly and then we went to some cool bar, like uh … The Phoenix, had a few beers there, met the owners and then we ended up at the really shitty big club, what is it?”

“Mooooooseheads! I should start an event for our Canberra show, official after party at Mooseheads at midnight. Tell everyone I’ll meet you there.”

You heard the man.

You can catch RAAVE Tapes’ explosive live show at Transit Bar on Thursday October 26. Tickets $13.24 available via Moshtix.
Save