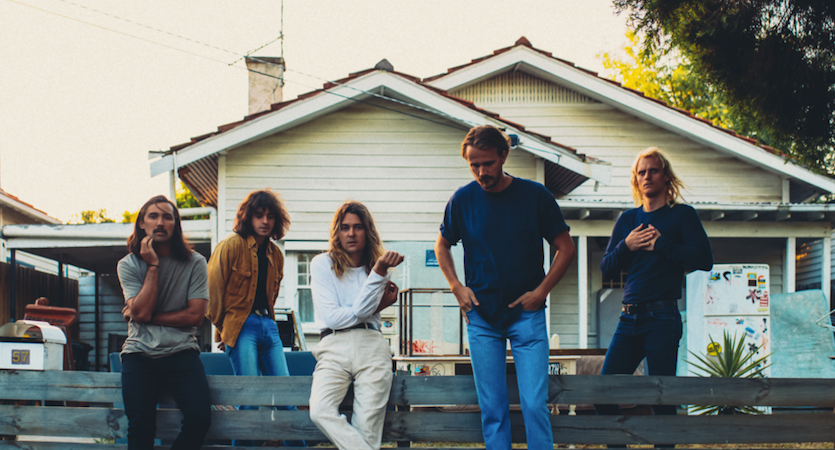 THE BELLIGERENTS are on a roll, having launched a debut LP six years into their time together as a band and having scored air time on Triple J for songs including ‘Flash’. Now the psych/pop five-piece from Brisbane are coming to Canberra as part of their album launch tour. I spoke to bassist Konstantin Kersting about the band’s progress to date.

Some of the band members met each other through dating each other’s sisters and, for most of them, The Belligerents was their first band experience.

“While all of us had been playing music for years, this was the virgin band for most of us. I started playing violin at four and Andy (Andrew Balzat, synth/vocals) was really good at piano when he was younger. Stag (Samuel Sargent, drums) had played in hardcore bands in Canberra before, including possibly the band that became Hands Like Houses, before he moved to Brisbane.”

“This made us fall out of love with the music we were making.”

In 2012 the band achieved their first real milestone on its road to success, winning a spot playing at Parklife in Brisbane through Triple J Unearthed. “This weekend coming is the five-year anniversary of what was the first time we played on a big festival stage, and were able to hang out with some bigger bands. It was very exciting, for sure.”

Asked why it took six years before the band issued its debut LP, Kersting explained the development of The Belligerents’ sound, and how early success almost stifled creativity. “We had to figure out as a band what we wanted to do, and our style of music has changed dramatically since the 2012 EP She Calls the Shots. At first, we tried to please other people too much. Parklife was our first experience of success and we were keen to keep it going, so we fell into the trap of thinking, let’s make something other people might like. This made us fall out of love with the music we were making.”

The band did not release anything for about two years and it was not until a move to self-producing and the release of the single ‘In My Way’ that the band realised that this was what they really wanted to make.

“We stopped caring what everyone else thought and made what we liked. That was when our sound started to change a lot.” The issue of the EP Outside:Inside firmed up the band’s style, indicating the general sonic approach the debut album would take.

In an unusual move, the band avoided road testing several album tracks at gigs, until it was time for the launch tour. “For me, it feels weird if you see a band doing an album tour, but they have been playing the songs off the record live for the last year. We really wanted to hold back playing some songs, especially those that sound a bit different, until the album was released.”

THE BELLIGERENTS, together with BUS VIPERS and other support TBA, will play at Transit Bar on Thursday November 9. Doors at 8pm. Tickets $20 through Oztix.