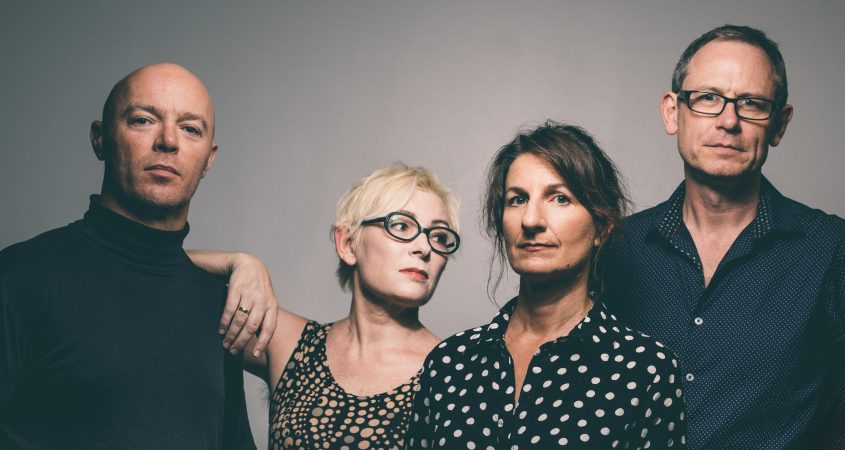 Other than populist movements and craft beer, the 2010s are probably most notably defined by the phenomenon of the band reunion. For the first time, popular music has started to scrape the bottom of the wellspring of originality, leaning on the refurbishment of relic rockers to sell concert tickets. Reformer and singer-songwriter/guitarist, Jodi Phillis, of 90s heroes THE CLOUDS, feels a little conflicted about doing it herself.

“Everyone’s doing it. It’s something that I don’t think is that healthy. I mean I’m doing it but at the same time, why is this happening? Where are all the young bands? It’s kind of strange. It’s not something I feel altogether excited about.” Phillis laughs.

For The Clouds however, it’s certainly no case of making a quick buck on an arena tour. The band soared in the early nineties with their utterly unique brand of angelic-grunge juxtaposition, fronted by Phillis and bassist Trish Young’s iconic harmonies. The band tragically crumbled in 1997 in the face of weakening success and the “ageist” forces of triple j. Many cried a classic act lost too soon, as most members were forced to put away the ripped flannel and guitars for stable work. What few understood perhaps, is that Phillis herself was grappling with something more crippling than artistic acrimony: chronic insomnia.

“It’s something that’s plagued me ever since The Clouds started touring, and one of the major reasons I had to stop and why I haven’t kind of been able to do that much of it, even for the music that I’ve done since The Clouds.”

Phillis persevered, her musical obsession overwhelming the serious psychological deficit that it posed, carving out an intimate solo career amongst other ventures. Frankly, Phillis says, she didn’t have a choice.

“If I wasn’t doing this I may as well be dead. Seriously… You get to a certain point where you can’t turn back, you know who you are, and if you know that there is music in you that needs to come out then you just have to go for it even harder as you get older. I’m deciding to go harder.”

After recently finding a “life-changing” cure, Phillis has come out the other side with a well-worn tapestry of life experience, engaging in pursuits outside of musicianship that are no less essential: motherhood and working for the dole. One particularly “wonderful” work-for the dole experience in a charity book shop in The Cloud’s interim years provoked a grand epiphany.

“There’s so many kinds of people on this planet. I think as a musician if you stay in that musicians bubble, only mixing with musicians and creative people and cool groovy people, you’re really not seeing the real world, so it’s really good to get out there and do different stuff.”

The difficult circumstances surrounding a reunion of The Clouds has assured that they won’t be part of the crusty reformation narrative.

“We would feel really like we’d sold out if we just kept playing the old songs. That would be the most unappealing thing for us to do. Whether or not people are going to care about the new stuff that we do, cause I know a lot of people are going to want to hear the old favourites, but they’re just going to have to suck it up and put up with our new songs. That’s why we do it, because we enjoy trying new things and that hasn’t changed.”

The determinability resulted in the tantalizingly brief EP Zaffre from earlier this year, the band’s first recorded music in twenty years. The three tracks are a paroxysm of the bubbling creativity that gestated over the hiatus period, maintaining a sharp bubblegum sensibility while existing in a brand new frame of dreamy influences.

“We’ve reached this mature point where we just take each song for what it is. Because we were [back in the 90s] playing all the time and the big grunge thing was happening, we just kind of went with that. Now we’re just four weird little friends that like playing music together. We do whatever we want, there’s no scene that we’re part of.”

Forthcoming single ‘Beautiful Nothingness’ brandishes this lack of constraint with relish, Phillis remarking that its aspirational benchmark was Daft Punk. The jaunty bass groove and Nile Rogers guitar scratch certainly departs from the grunge-affected tunes of their heyday, perhaps also due to the fact that creativity has never been a more critical resource.

“We live in different parts of the country now. It’s been challenging working long distance, it works but it’s a bit slow. We have to work out how we are going to do an album because we’ll have to work a bit faster than we have done. Everyone works except me so it’s everyone arranging their lives to get time off and commit solely to The Clouds.”

Enough commitment was garnered to organise their national tour with their old tour-mates and, of course, fellow reformers the Falling Joys, rousing the hearts of nostalgia junkies and young pundits alike.

“The Clouds were going to go away on tour anyway, because the last time we went out it was the Day on the Green, and we weren’t allowed to do any sideshows because of that contract. Our old manager came back on board with us and suggested going out with the Falling Joys who he used to manage as well and it was one big happy family. So we’re all revisiting that world, it’s great!”.