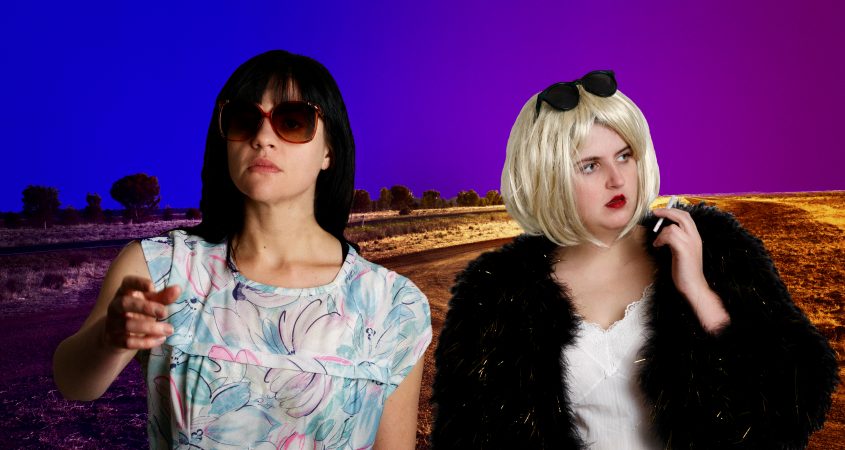 It turns out that neither Bridget Mackey nor I is a morning person. Not today at least. It’s just after 9am, and we’re on opposite ends of the phone line, each with a coffee in hand. Mackey has been working on the script for her play LOVE/CHAMBERLAIN between her two homes, Melbourne and Canberra, and production is about to kick into gear.

“Yes, we had a development a couple of months ago with Ainslie and Gorman,” she says. “I’ve been working on the script already. It’s really exciting. Everyone’s really on board with the idea. Ainslie and Gorman have been really supportive.”

The premise of her play is a bizarre and wonderful one: a chance meeting between Courtney Love and Lindy Chamberlain on the Federal Highway at midnight, both en route to consult an oracle. It would appear the two have a lot to talk about.

“They just kind of waltzed into my head,” says Mackey. “I was on a plane on the way from Sydney to Melbourne late at night and they just sat in my head and had a conversation about Quentin Tarantino. Often when I write plays – I think with every play I’ve written – there’s been an image or an idea that I haven’t been able to understand. Then through the process of writing I begin unpacking it. So with this I was like, ‘what would those two women have to say to each other?’ And the more I researched the more I found commonalities between them.”

The stage appears to be the perfect place to bring this encounter into focus. I wonder whether it could’ve worked out another way, and how Mackey must’ve considered the space in which the interactions takes place.

“With this play I had a very strong location for where it was set,” she says. “It appeared on a highway, so that kind of space. I normally see it in a theatre, and see the set design as much as the real space, if that makes sense.

“We haven’t gone into production yet – we’re still looking for a set designer. I think there are some things that are going to be a bit challenging. But yeah, I try to think about, when I’m writing, how it would actually be able to appear on a stage.

“And it’s always nice when people take on board your ideas. Someone might come and say, ‘actually, what you’ve asked me to do is impossible, but how about we do it this way?’ and then you go, ‘ok that works better,’ you know. I think the great thing about collaborative work is that you have to let go of control a bit. But sometimes that’s better than what you could have thought.”

Love/Chamberlain accommodates the telling of a larger story. Using the tenuous geographical and social connections between two characters, and playing on the known truths about their lives, it brings out the uncertainties, and draws attention to the way they’re individually portrayed and viewed.

“I’m playing around with the audience’s expectations of who they are,” says Mackey, of the titular characters. “For me that’s the benefit of playing around with famous people, with real people. There might be some people who don’t know who those characters are, but I’m working with the assumption that people are going to come in with an idea or a judgement of the women they’re watching. And I’m kind of messing around with that. It’s a bigger thing about how we judge public figures, and specifically the behaviour of women in the public eye. But I’m also being very specific about Courtney Love and Lindy Chamberlains’ lives.

“I think often the more specific you are about something, the easier it is for people to relate to it in a lot of ways. It’s the fact that it’s true.

“There’s a third character who’s an oracle. That’s kind of the magic realism part of the script where I can make stuff up. There’s actually a lot of times in their lives where they could have met. Like they both lived in Seattle at the same time, or they could have both been in Sydney for a press release, so there are these imaginary opportunities. I’m inventing the truth; at this point in time, they would have had these things going on, and if they met at that time what would they have had to say to each other.”

The Ralph Indie program, which enables emerging theatre producers, writers and directors to make their visions a reality, has perhaps inadvertently become a home for dramatic works that challenge ingrained perceptions. Last month’s Fuse addressed the boundaries between sound and movement, and in 2016 Vinegar Tom played on the implication of guilt. So too, Love/Chamberlain seeks out the connections between two disparate characters in order to address our perceptions of them.

“I think that in terms of the driving force of the play, they’re both looking for an answer,” says Mackey. “Whenever they meet they’re always looking for something.”

LOVE/CHAMBERLAIN runs from November 8-12 at the Ralph Wilson theatre, Gorman Arts Centre. Tickets from $25 via eventbrite.com