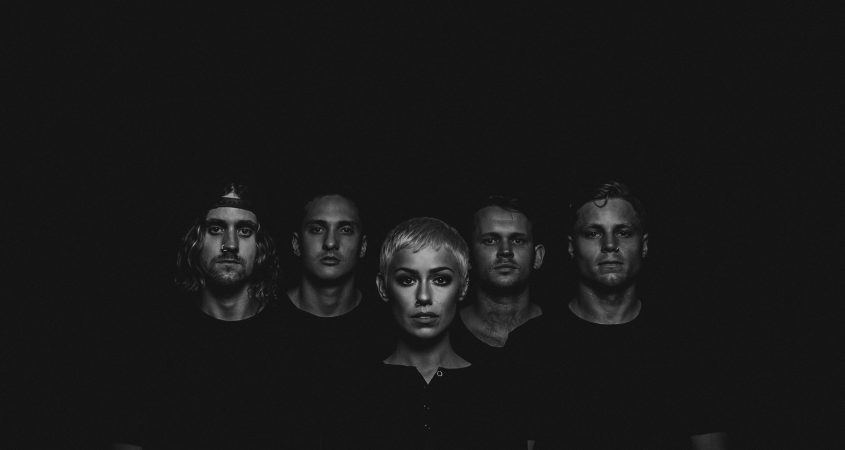 From the shores of Sydney to globally recognized band, TONIGHT ALIVE is living proof that you can achieve anything you like if you put your mind to it. Starting at a very young age the band has accomplished so much throughout their career.

When I was in high school I didn’t even know what I wanted for lunch. When they were in high school Tonight Alive was recording their first EP. Since 2008, Tonight Alive have shared the stage with household names, sold thousands of albums, and have made a name for themselves in the rock music scene.

Our whole idea of recording time was we wanted to be in a relaxed environment that fostered creativity and inspiration as that’s the kind of band that we are.

The Aussie rockers are heading home and back to where it all began, revisiting all the rooms they used to play at when they first started. The Back To The Beginnings tour is kicking off in Canberra, then heading to Wollongong, Sydney, Newcastle, Brisbane, Adelaide and Melbourne. Having been touring overseas for some time now, Tonight Alive are excited to come back to Australia to play intimate shows for their fans.

“We’re not going on town with production and all those things,” says lead vocalist, Jenna McDougall. “It is just about the setlist and a good time to get in touch with everybody [fans] and to remind them what it used to be like in a way.

“In the business everybody is always trying to look bigger than they are. We love playing big shows but I think it’s going to be really humbling and bring everything back to perspective to play club shows in Australia again, because it will help you channel what’s really important, which is delivering a message through the songs and to bring an energy to the room to make everyone feel good in that moment. ”

Since their third studio album, Limitless which was released in 2016, Tonight Alive somehow found time in their busy schedule to go to Thailand to record a new album earlier in the year. The recording process was said to be more relaxed and free.

“Our whole idea of recording time was we wanted to be in a relaxed environment that fostered creativity and inspiration as that’s the kind of band that we are. We are the type people who never holiday and never have time off so it’s nice to combine the two”.

Some bands can’t even make it to two albums so making it to four is saying something about their talent. The Aussie rockers have been going on for nearly a decade and it’s safe to say that the music industry is changing, but that doesn’t seem to concern them.

Now unfortunately you don’t see a lot of girl member bands anymore, so Tonight Alive announced a rare competition for local bands with female members. The winners of each city would have an opportunity of a lifetime to support Tonight Alive in the opening slot of the Back To Beginnings tour.

“It’s been on the cards for ages but we hadn’t done a headline show in Australia for a long time. That is one of the benefits of doing your own tour is setting the tone and making all the rules. It just felt right. There were a lot of great entries and choosing one band from each city was hard.”

Supporting them throughout the whole tour is Melbourne band The Beautiful Monument, who might I add is an all-girl band and also Australian, which is a bonus.

Throughout the shows you can expect a mixture of old favourites, as well songs from their new album. Having played at these venues already and being used to play to thousands of people, you wonder if the band will still get nervous before each show, or if it would be a breath of fresh air.

“It feels like we are coming back to ourselves, back to home, and back to the start that is sort of what we reminiscing on when we named the tour. It feels like you know everybody in the crowd it’s not like you have a whole crowd of people that you have to win over. When you come back to Australia nothing like that matters.”

Jenna McDougall has made a name for herself not only in the rock scene (and for her cool hair styles) but in the pop music scene also. She featured in Aussie rapper Illy’s single ‘Oh My’. Can we expect her leaving the band to pursue solo projects in the near future? Don’t worry… not any time soon.

“At the moment I am completely dedicated to the band. I know for sure that I will be playing and writing music no matter what project that is in, so I do look forward to exploring those possibilities.”

Having just kicked off a tour with American band A Day To Remember, it is safe to say that Tonight Alive is not stopping anytime soon, and thank god for that.

TONIGHT ALIVE hit Canberra at The Basement on October 31. Tickets via livenation.com.au.

Liked it? Take a second to support Rebecca Adams on Patreon!

Support Rebecca Adams on Patreon!
11% complete
When we reach $500 per month we will begin the official BMA Podcast. This will include interviews with some well-known musicians and artists, tips and tricks for publishing in print and online, as well as other discussion topics around Bands, Music and Arts in Canberra!