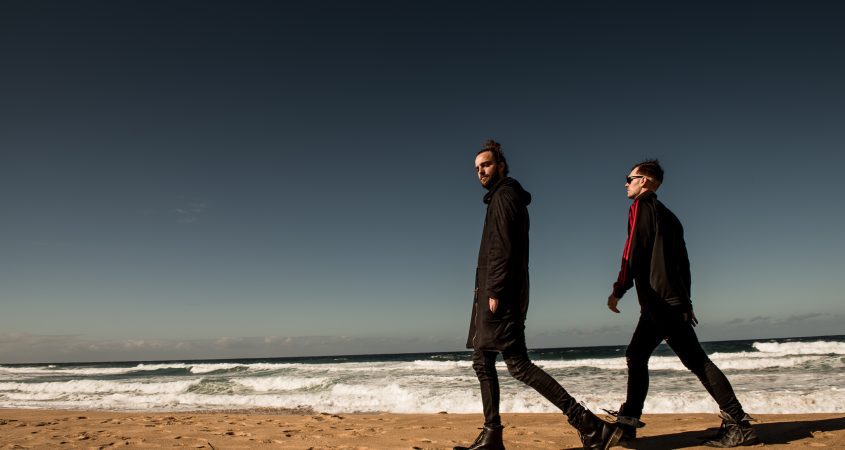 BOO SEEKA have one of the most unique sounds in Australian music at the moment. I find their mix of beats, melody and beautiful vocals extremely intriguing. My quest is to quiz Sammy Seeka enough to try discover how they developed this.

“Ben has always played guitar,” he says. “He’s got great rhythm so then you put him on a drum kit and he’ll play beautiful beats. For me I used to always play guitar, sang a little bit but not nearly as well as Ben, and then when we started this band we thought ‘we don’t need two guitars’ so I thought, ‘well what can I do then?’ I picked up some sampling pads and a few keyboard synths and just learnt on the fly really. I still practice keys most days of the week to try and improve.”

For me, for this project it was about ‘okay, I’ve got to make electronic music that can suit this, and we want it to be fun and sound edgy and interesting’.”

Their instrument history still only explains some of their evolution and unique sound. In an attempt to understand their influences I was curious about Sam’s favourite gigs as a punter. “Yeah, there’s a few. One that stands out, well every time I see them, they’re one of my favourite bands of all time, is The Prodigy. The last time I saw them was about two years ago in Sydney and it was just one of those times where you lose the plot, go out and have a fun night running around, getting in a few circle pits and what not and feeling a really good release. Then on the other hand I went and saw Matt Corby maybe going back five years now. I’m a big Matt Corby fan and just what he did in a completely different realm to The Prodigy had me as equally blown away and I still get chills from that so they’re fucking great gigs to go to.”

Of course, with such a unique sound there has to be a large range of influences. “We have different influences because of our different backgrounds,” says Sammy Seeka. “Ben, with a singer songwriter background, has influences like Nick Drake’s Pink Moon, and Neil Young, Bob Dylan and all that era of beautiful songwriting and workmanship. For me, for this project it was about ‘okay, I’ve got to make electronic music that can suit this, and we want it to be fun and sound edgy and interesting,’ so I started listening to a lot more Massive Attack and Moby and all that kind of electronic music that isn’t just necessarily for a dancefloor but electronic music that you can happily put a record on and listen to at home, that sort of thing. I used to DJ and produce a lot of electronic dance music like house and techno so I was very much in the club scene. I was pulling myself out of that to stop just writing pure dance music and to write music that can make people dance but also can just entertain you while you’re driving to work or sitting at home. It’s gotta have that essential music undertone to it and not just be a floor filler.”

I thought learning about their songwriting process might give further clues as to how they developed their sound.

“Every song comes about in a different way. Sometimes I’ll make a piece of music and show that to Ben and he’ll write lyrics and put vocals over the top. Sometimes he will come to me with a vocal melody and lyric that he’s playing over his strummed guitar and we will build a backing track around that. They’re probably the two main ways things come together, other times we’ll just come into my studio with a bunch of instruments and we’ll just jam and jam and jam and if we find something that hits us we’ll just run with that idea and work on it together. There’s kinda no rules to it. That’s why a lot of the songs on Never Too Soon sound so diverse.”

The duo have experienced some nice successes in their short career so far, selling out shows in the UK, making the Hottest 100 from their Unearthed release and recently having Never Too Soon as the feature album on Triple J. When Sammy Seeka spoke about some of this I could sense a real appreciation and excitement.

“A couple of standout ones would be ‘Deception Bay’ getting in 50 of the Hottest 100 in our first year. We’d only just started out. I was on a footy field with a hundred mates for Australia Day that year just like running down the field getting obscenely drunk. We had the radio blaring and 50 came on and pretty much the last thing I remember of the day was the start of ‘Deception Bay’ getting played. I don’t even remember the end of it because I think everyone was just funnelling vodka and beer down my throat. Yeah, that moment was a pretty special one. Playing Splendour in The Grass and seeing the crowd that turned out for us, that’s another one I like and playing Red Rocks Amphitheatre over in America; it was phenomenal, there was something special in the air there.”

Given their success and evolution, it’s only fitting that the group will be playing bigger venues on their upcoming tour, including our own Academy Club (a very fitting venue as it’s also evolved into hosting more live music over the past year).

“We’ve played Transit Bar, like probably the last four times we’ve been to Canberra, and we thought: we love Transit Bar but it’s a little venue so let’s try and step it up a bit this time. We’ve sold it out the last few times so we thought let’s try something a bit bigger. We heard it’s a cool venue too.”

Be part of the evolution and get along to BOO SEEKA at Academy Club on Saturday November 18. Tickets are $21.50 through Moshtix.