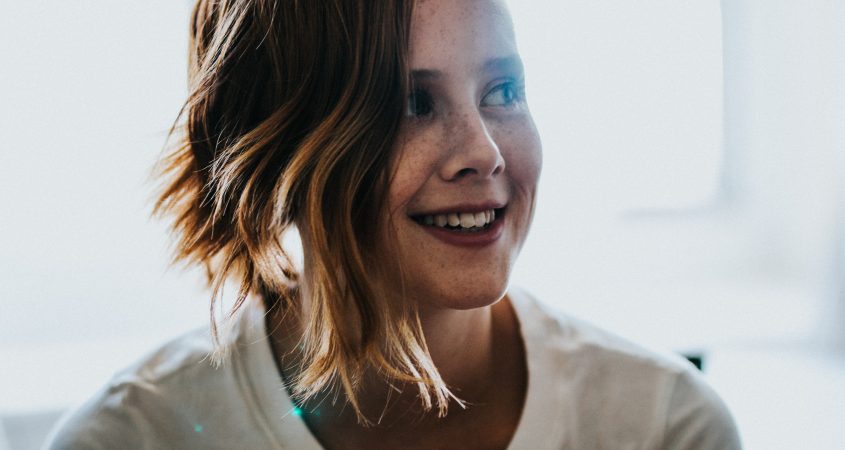 I’m sitting at The Front Café & Gallery like I do every Sunday, but this is a little different. Instead of typing away mindlessly for hours on end, I’m counting down the minutes to the time that I need to call and interview RACHEL MARIA COX. It’s like when a crush gives you their number, but you haven’t given yours back, so you’re the one that needs to call and you can’t stop skipping about in your head, fretting about calling and sounding less coherent and demure than you would desire.

In case you didn’t know, Rachel Maria Cox is the big, beautiful brain behind the Sad Grrrls Club label, a label that has signed acts such as Antonia & the Lazy Susans, Dog Dirt, and Sportsbra. They are a champion for inclusion and gender diversity in music and Cox’s new album, Untidy Lines, was recently discussed in none other than Rolling Stone.

Sad Grrrls Club is sort of a portmanteau of the Riot Grrrl movement and Sad Girl Theory. I was very keen to ask about how Sad Grrls began. Cox explains, “I took a joke too far. I was sick of being the only non-male on lineups and was joking about it with Essem, and the rest, as they say, is history.”

Finding its beginnings in 2015, Sad Grrls Club started as a touring festival, performing with local acts from each major city around Australia. Upon the festival’s conclusion, attendees were asking what was next for the collective, and so the label was born. Over the last two years, it has brought together a wonderful and diverse array of non-male musicians, producers, recording engineers, photographers, and the list goes on.

Sad Grrrls Fest will be celebrating its third year running in November. Touring acts will include Major Leagues, Moaning Lisa, Huntly, and Antonia & The Lazy Susans, plus local acts included for each leg of the tour.

After a bit more chatting, we got onto a very hot topic; inclusion and safety for gig attendees. It is, of course, an issue that the music scene has been dealing with for some time now, but it seems to be gaining the recognition it deserves in more recent times. The Last Exposure recently released a single on this issue called ‘The Boys’. Moaning Lisa members Charlie Versagi and Hayley Manwaring made a viral video in which they discussed issues they’d been having with hotheads causing discomfort and abuse to both attendees and band members at their shows. And Camp Cope also discussed the issue in their feature in last month’s BMA Magazine. So I query Cox as to why it’s become such a talked-about subject.

“This has been happening for a really long time and it’s getting really frustrating,” they say. “The exciting thing is that people are actually listening now and it is becoming the norm, it’s finally just getting more mainstream media attention with the rise of more mainstream forms of feminism. I’m looking forward to seeing a change.”

They went on to discuss that it’s not an issue that only people feeling the brunt of these prejudices and injustices should be becoming aware of – in fact, quite the opposite.

Any event you spot on the Sad Grrrls Club page will have the disclaimer ‘ALL SAD GRRRLS CLUB EVENTS ARE SAFER SPACES’, specifying the wish to be free of sexism, racism, bigotry, homophobia, transphobia, fatphobia, ableism, wh*rephobia, classism, and any other forms of discrimination or oppression. As you read it, you are brutally reminded of just how many ignorant and hateful people there are in this world and it really bums you out that this even needs to be said. But thank you, Sad Grrrls Club, for saying it.

This latest release of Cox’s, Untidy Lines, is such an emotionally driven album. Something that you can find more and more relatable as you bang it out over and over in the car. In particular tracks like ‘Emotionally Untidy’ and ‘Misery Kink’ are really useful for singing along to either sadly or angrily, or perhaps a little bit of both, as you think about an ex-partner that’s really given you the run around.

As I talk to more and more people in Canberra about Cox, you realise just how influential they are. They have an ocean of fans here, all hopelessly devoted and who glow when you talk about them and their music. You can see these local fans reflecting on the lyrics with their eyes closed and a smile pushing their cheeks upward and you just realise that this music is the real deal.

I’ll end by giving you a little advice. If you are planning on playing Untidy Lines to have a bit of a cry to, be sure to make ‘Stronger Lines’ the last track you listen to so you can belt out “I am stronger now than I’ve ever been before,” and leave your Rachel Maria Cox session on a high. There’s a reason it’s the last track on the album. Trust me.

EDIT: RACHEL MARIA COX will no longer be performing in Canberra on Saturday October 28. You can read their statement on their Facebook page.

Support Alice Worley on Patreon!
11% complete
When we reach $500 per month we will begin the official BMA Podcast. This will include interviews with some well-known musicians and artists, tips and tricks for publishing in print and online, as well as other discussion topics around Bands, Music and Arts in Canberra!