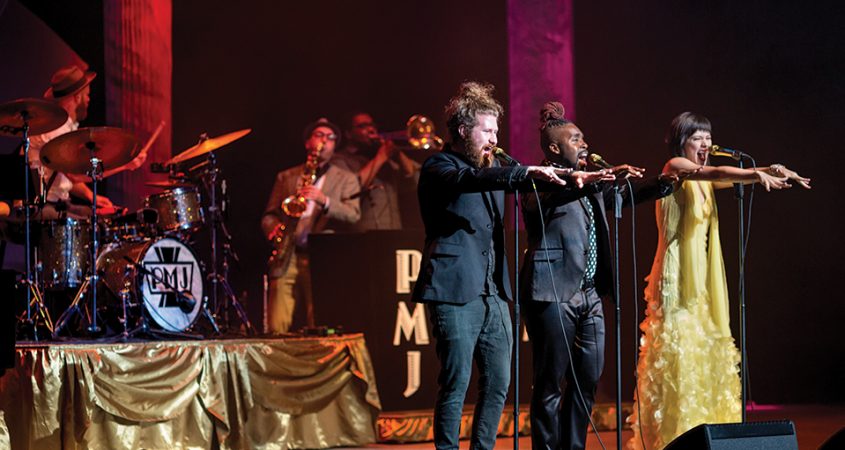 The first thing I asked SCOTT BRADLEE, founder of YouTube music sensation POSTMODERN JUKEBOX, who are bringing their concert show to Canberra in late September, is how on Earth he managed to land a gig arranging music for the 2017 Tony Awards in New York City.

Consequently, the very first thing Scott Bradlee told me is that he’s chummy with Kevin Spacey, who is a “big fan of PMJ,” and who even introduced one of their shows in Paris earlier this year. Bradlee explained that Spacey, after getting this year’s Tonys hosting gig, “had this idea for a musical opening, and he just asked if I could, you know, help him out with some stuff. And I said, ‘yeah, of course!’” As he explained this, I was trying (unsuccessfully) not to spill my tea all over my keyboard while imagining the very large sums of money I would fork out to hear Frank Underwood say “PMJ.”

What would Justin Bieber sound like if he were an artist in New Orleans in the 1920s?

Spaceying out aside, PMJ is a brilliant, not-so-well-kept bunch of extremely talented musicians led by Bradlee, who describes their modus operandi as “a community dedicated to taking today’s biggest pop hits and reimagining them in different styles and eras, anytime from the ‘20s to the ‘70s.” Essentially, it’s about figuring out what a Miley Cyrus song would sound like as Doo-wop, or whether a classic Celine Dion tune can be transformed into ‘40s swing (spoiler: you bet it can). “If you’ve ever had these kind of crazy thoughts, like, ‘what would Justin Bieber sound like if he were an artist in New Orleans in the 1920s?’” says Bradlee, “Yeah. That’s what we do.”

Starting up in 2011, PMJ is run by Bradlee, who picks a popular song, re-arranges it for his chosen genre, finds a vocalist who matches the song, several musicians, and sets about recording it for YouTube. There, PMJ has amassed a millions-strong following, which has allowed them to release several albums. Last year, they came to Canberra for the first time, and they’ll be back in September. “Australia is one of our favourite places to tour. We always have awesome audiences there, and when we have a good audience, a lively crowd, it always pushes us to greater heights. This is going to be a really fun tour – we’ve got some incredible people in the line-up. I can’t tell you exactly who, or what they’ll be singing. We keep that under wraps so there’s an element of surprise to the show. But I can tell you that it’s going to be a mix of some long-time PMJ performers and some new people.”

Bradlee’s process in picking the songs that get to go through the re-arrangement machine and pop out shiny, brassy and almost unrecognisable is fascinating. “I like to take songs that are really familiar to a lot of people and change them in ways that can make them completely unique yet recognisable. A good example is to look at the song ‘Sweet Child of Mine,’ which is a big hit from the ‘80s. Everyone knows the Guns & Roses version. But when you strip it all down to just the lyrics, it’s really just a blues song. So by starting there, I rearranged all the music to become this New Orleans blues sound, and brought in all these instruments – like a trumpet, trombone, clarinet, all the instruments that would’ve been there at the time. Then I got this singer with this great Bessie Smith-era blues voice. And by putting all those elements together, we remade the song. It essentially sounds like a brand new song even though you recognise the lyrics.”

That’s not to say they’re limited solely to songs with vocalists. One of my favourite pieces is a smooth jazz version of the Game of Thrones theme song. “That one came about because we were working with Dave Koz, who’s obviously a legendary saxophone player and has a really recognisable style. We were just talking about songs that had that sort of Deep South sound, and stuff that was really well known in pop culture that hadn’t been part of a mash-up yet. So I thought Game of Thrones – it’d be great to take that and flip that a bit. And it wound up sounding pretty cool.” (Understatement of the century: it could turn the show into a Cinemax classic without missing a beat.)

While Bradlee won’t tell me whether or not ‘Late Night with Jon Snow,’ as it’s been unofficially dubbed, will be on the set list for the Canberra show, he can promise an eclectic, electric bunch. “I picked a great mix of songs that are really familiar. If you’re a long-time fan and you know the videos well, you’re going to appreciate some of the in-jokes, and the deeper cuts. But if you’re coming for the first time, you’re also going to know the songs already because they’re some of the biggest songs that have been on the radio in the last 20 years. We take care to make it something for everybody in that sense.” He pauses, smiling. “It’s a musical circus.”

Postmodern Jukebox are playing at Llewellyn Hall on Wednesday September 27 at 8.30pm. Tickets start at $83.35 + bf through Ticketek.

Support Indigo Trail on Patreon!
12% complete
When we reach $500 per month we will begin the official BMA Podcast. This will include interviews with some well-known musicians and artists, tips and tricks for publishing in print and online, as well as other discussion topics around Bands, Music and Arts in Canberra!