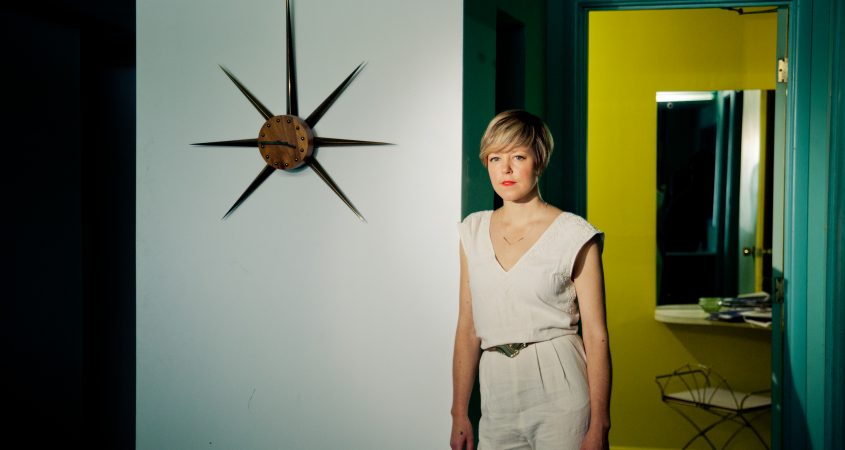 I first met Emily Barker when she and collaborator Dom Coyote bought their UK-based project Folk in a Box to Festival Garden for Sydney Festival 2014.  I have seen many a venue boast the “worlds tiniest”, and never has any venue I have encountered been quite as tiny as Folk in The Box, offering the single (two at capacity) audience member a truly intimate one-on-one performance in the pitch black.

Over the course of her career Emily Barker has released ­a string of beautiful and poignant records, not to mention various collaborative projects and compositions for screen, all of which have garnered praise and esteem within the song writing community and of critics alike. Patti Smith even extended praise for the theme song to BBC crime show Wallander.

Her latest offering Sweet Kind of Blue was produced by Matt Ross-Spang, at the iconic Sam Phillips Recording Service in Memphis and feels as effortless as it is soulful. Barker was kind enough to answer a few questions about the record for me.

If Emily Barker were a cake, what kind of cake would she be and why? “I think I’d be a seeded or fruity, not-too-unhealthy or sugary cake dreaming of being something more exotic and decadent like red velvet cake.”

Barker has just finished up touring the US for the first time alongside Mary Chapin Carpenter, what were her highlights? Favourite moment? Favourite meal? “The highlight was getting to perform to 1000 to 2500 music lovers every night in beautiful theatres or outdoor venues by lakes and be received so well by the crowd. They were such enthusiastic audiences! I was blown away by them,” she said. “But also a highlight was hanging out with Mary Chapin and her awesome band and crew and getting to see so many sides to America as we travelled around on the tour bus. We covered such long distances, from Colorado to New Hampshire, and it made me appreciate how diverse the landscape and people are from region to region. Favourite moment was probably singing backing vocals in Mary Chapin’s encores, particularly, ‘Down at the Twist and Shout’ which is such a great cajun two-step that I couldn’t help but dance and jive around the stage singing along. Favourite meal was at Cafe Gratitude in Kansas City where they do incredible vegan food and drinks.”

Sweet Kind of Blue is Barker’s first studio album in a while, so what was it like for her getting back in that environment, particularly in a studio as iconic as the Sam Phillips Recording Service? “It was one of the best experiences of my life working at Sam Phillips with Matt Ross-Spang, the producer, and the incredible musicians I made the album with. These guys are all from Memphis and have worked with Booker T, Ann Peebles, Al Green, Neil Young, Cat Power, The Allman Brothers, Isaac Hayes, etc. etc. Just ridiculous! We recorded live to tape in just four days and we worked out the arrangements on the spot before Matt hit the record button. We then had a string quartet, backing vocalist and horn section come in and lay parts down over what we’d done. It was all so fluid and it felt like there was some magic in the room – definitely down to it being in such a special room with such an amazing history.”

Barker has covered all sorts of ground with her songwriting. With that in mind, how was Sweet Kind of Blue brought to life for her as its creator? “When I sent some songs to the producer Matt, he came back to me saying he could hear this soul/blues aspect to them and he then sent through a playlist of reference tracks. I grew up listening to a lot of soul and it was Aretha Franklin who got me singing (not personally! But her albums…) with Matt’s comment in mind and with the reference playlist, I started writing specifically with a more soulful production sound in mind. Half the songs are written prior to having an idea of how the record would sound, and half of them are written after having found Matt.”

Later in the year, Barker will be headed back to America for Americanafest. Are there any artists she is particularly excited to be seeing? “Yeah, I’m looking forward to the festival! Artists I’m excited to see are…Aaron Lee Tasjan, Yola Carter, Ciaran Lavery, Cory Branan, Dawn Landes, Iron and Wine, Josh Ritter, Lilly Hiatt, oh so many!”