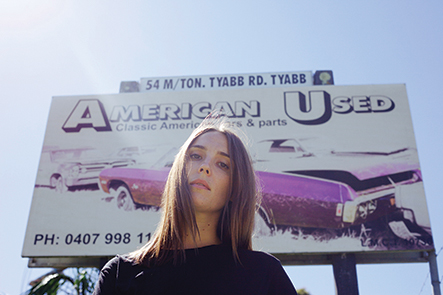 With a voice that soars to melodic heights before grinding to bruising standstills, ALI BARTER has masterfully married her choirgirl past with her rock‘n’roll present in A Suitable Girl. The record has received the kinds of reviews usually reserved for seasoned international artists, not Melbourne based indie idols. Through the lens of a twentysomething woman with something to say, the acclaimed debut takes listeners on a blistering journey through these modern times. Barter’s influences are unabashedly defined on each track; The Bangles meets Magic Dirt, underscored with the subversive lyricism of early Veruca Salt.

The album explores vulnerable territory and as Barter confesses, the recording process wasn’t always easy. “There’s a song called ‘Tokyo’ on the album and it’s funny. Everyone really seems to like that one, but that one (she pauses) it was the oldest one,” Barter reflects on the evolution of the song.

“My aim, the more I make music, is to simplify. The thing with ‘Tokyo’ is, it was still ‘old Ali,’ a bit more complex, a bit more, you know, reliant on instrumentation than the new ones. I found that one really difficult. Because, it wasn’t as simple as the others, it wasn’t just like ‘play a guitar, sing and then put bodacious guitar solo in.’” With such a rollicking tracklist, ‘Tokyo’ is creating quite the contrast when played live. “The vulnerable songs are always the scariest. All the songs are just, ‘Woo-hoo! Party time!’ and then we have ‘Tokyo’ and we’d be like, ‘oh god’ and we’d all feel really exposed. You put a ballad on a rock album and everyone goes ‘oh my god, they can hear me!’”

When I draw a parallel between A Suitable Girl and the upcoming protest album Native Invader by veteran songwriter Tori Amos, Barter’s expansive taste and enthusiasm for music reveals itself. “She’s a really incredible influence. I’ve always loved her! She had a record when I was 15 or something, and it was called Strange Little Girls. It was a collection of songs written by men about women. It was incredible. I just remember being so moved by it. It was so violent and so angry and so… Tori Amos! It was so beyond what I could understand at that point.”

Being moved by influential female performers has certainly left its mark on Barter. Her music blog, The History Grrrls, celebrates the major contributions made by women in music through weekly installments. These moments of heroine worship are a testament to Barter’s extensive love of genre, in all its guises. “It’s so great. I love it! It’s so nice because we forget about all these amazing women! I am a massive Janet Jackson fan but I completely forgot that!” As Barter nostalgically embraced the almost-forgotten back catalogue of Jackson she was stunned at what she came across. “This is unbelievable! You learn all these facts about these women that you never knew either, things that were happening at the time these songs were being played on the radio.” With introductions to lesser-known musicians such as Sister Rosetta Tharpe, I earnestly suggest that Barter is now a teacher of sorts. She scoffs at the idea, “I teach the basics ‘cause I was a nanny! People have short attention spans and so do I!”

While Barter basks in the glory of her 2017 release fans are eager to know if there is a follow-up on its way. “Yes! I’ve started writing already. I kind of just want to get going with it. I’ve got some time over the next month to get some more songs done. And for the tour we’ll have a couple more songs.”

One Foot In Tour is sure to cement Ali Barter as a force to be reckoned with as she further establishes herself as a must-see live Aussie act. Barter says she’s pumped to hit the road and that her support slot with City Calm Down and The Jezebels last year really solidified something for her and her band. “Now it feels really comfortable and really great. We played in Adelaide on Friday night and it just feels so fun now.” Barter’s support slot for The Jezebels was an astonishing introduction to those who were not yet familiar with her work, but Barter admits that it’s taken some time to get to this point. “I think it takes a while for the stage to become ‘where it’s at’ though, because for the first couple of years that’s (playing live) all so horrific. It’s really hard! It’s really hard to get a show together and get your vibe together and get a band together. No matter how good the musicians are, it takes a while for everyone to gel and for it to just sort of become second nature.”

With a few ‘special surprises’ up her sleeve, Barter’s return to Transit Bar (she was last here with Husky) is going to be a must see this October and she can’t wait to finish this run of shows in the Capital. “It’s funny. I love performing. Music has so many aspects and some of it can be really soul destroying. There’s aspects of studio recording that are really great and there are aspects that make me want to tear my hair out, but when I’m on the road and when I’m getting to play a show each night … um … that’s the best.”