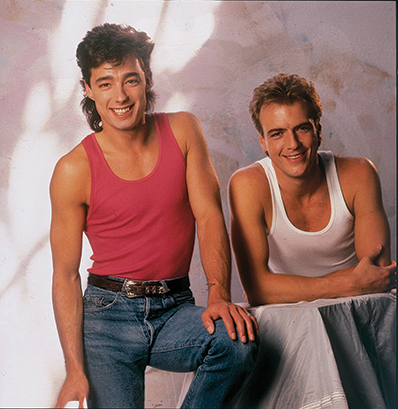 “It was just a time where there was a lot of money around; I don’t know what it is. People would always find money to go out and entertain themselves and they were leaning more towards having a good time.” Whether you were old enough to have had the money to spend in the 80’s or you just like the music, ‘having a good time’ is certainly a great theme to associate with the era, as identified by GO WEST’S RICHARD DRUMMIE. The group will be here as part of the 80’s MANIA tour along with Paul Young, The Cutting Crew, Wang Chung and Taylor Dayne.

To have a good time one should throw abandon to pretentions and fears of reprisal. 80’s fashion is part of this. Having seen a few of the acts at the Totally 80’s tour last year adorn their classic look I was curious as to if we can expect the same of Go West. “The look is not in any way 80’s. I pretty much wear what I wear on stage whatever we’re doing. Whether it’s a Go West solo gig where we’re doing an hour 40 of our own material or if we’re at a gig like this, but the audience dress up. I don’t think a fluorescent green ra ra skirt is my look (laughs). We weren’t a big style band. We didn’t have a look like say, Adam Ant or Boy George.”

Richard still encourages fans to dress up though. “That’s what makes it really work though. They tried over here to move it onto the 90’s and it just doesn’t fly. It may somewhere down the line, no disrespect to the 90’s. We were working through the 90’s; we had the ‘King of Wishful Thinking’. The 90’s thing doesn’t seem to give the same fun day out.”

Still, sticking to the good time, no pretension theme, Richard assured me that we will get the hits we hope for. I probed about their attitude to playing the same hits so many years on, given that some younger bands are quick to deny some of their early singles that originally attract fans. “No I’ve got no problem with playing them. We didn’t have so many hits that we can’t fit them in and some stuff that wasn’t released as singles. I never get bored of it, I look forward to it. It’s nice to know when you dive in the pool there’s going to be some water in it. In an hour and 40 minutes if you can’t squeeze in 15 minutes of hits, you’re a bit churlish, you should cheer up and give them what they want. We will not be doing anything that people don’t know. Maybe Nick from the Cutting Crew might say this is one from the new album but certainly not more than one each. We know why people are coming to see us, and it’s an 80’s jukebox, they don’t want to come and hear some track they’ve never heard before.”

Given that some of Go West’s biggest songs are from soundtracks (‘King of Wishful Thinking’ from Pretty Woman, ‘Don’t Be Afraid of Your Dreams’ from A Nightmare on Elm Street 4 and “One Way Street” from Rocky IV) I wondered if this was a conscious move in their career. “Sylvester Stallone approached us. He really liked a track called ‘One Way Street’ and when he got together with us we were actually pencilled in to do the song that was called ‘Hearts on Fire.’ It was the big song. You know he always runs up something the night before the fight and shouts and points at the sky at the end of it. We were asked to do that track but I’ll be honest with you, my partner Pete wasn’t too enamoured with the song and you could kind of hear it so they decided we weren’t the best guys to do that song and instead he went with the song he liked in the first place which was ‘One Way Street.’”

“It’s a great thing because we’re not good at pumping air in our tyres, we don’t say ‘I’m always out with Johnny Depp, my girlfriend’s a supermodel and I like to fly my helicopter here there and everywhere.’ We just go well, ‘I like to play football, and do a bit of gardening and I love to cook so if you can start talking about Pretty Woman then that’s really good, and everything that comes along with it. Also the ‘King of Wishful’ video was absolutely brilliant coz it had look alikes from the film and all that stuff really helps to just take people’s attention away from just me and Pete.”

“We’re just two guys from London. Coz we don’t get into trouble, we’re two nice lads, we have the press department trying to drum something up. My dad called me up once whilst I was living in LA and he said, ‘what’s he like?’ I said, ‘what’s who like?’ and he said ‘Clint Eastwood.’

As a songwriter myself and a bit of a hopeless romantic, I wanted to know if there was a true story behind ‘King of Wishful Thinking’. “It’s a true story for anyone that has been around the park a couple of times and come out of a love affair at the wrong end. When you’re in a duo and you both write the words, we’re not Bob Dylan, one of us might have a concept and the other one will come along for the ride but sometimes we will go ‘well has she left us or have we left her?’ I just thought that was more of an interesting approach to say yeah instead of “I can’t live if living is without you,” or “how can I live without you,” (Richard sings these lines), there’s a million songs about will you ever manage to survive without someone and I just thought it was nice to have one that went ‘nah, it’ll be alright. But it’s tongue-in-cheek; the guy is telling himself he’ll be alright.”

Come shake off any pretensions, hear the hits and celebrate the good times at 80’s Mania at Canberra Southern Cross Club on Thursday the 2nd November. Tickets start at $93.45+bf through Ticketek.