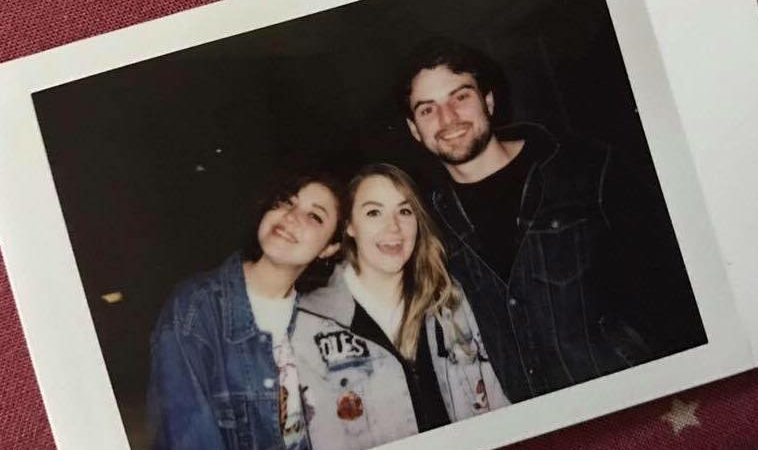 Stevo, Jesso and Kato, (one day we’ll play with Ro-Ho, when she’s not busy having a life).

We were legitimately so close to being called Adam Sandals. We were just frothing for a pun. There’s a great Lucksmiths song called ‘English Murder Mystery’ about a girl who loves Agatha Christie more than boys. It resonated with us.

So picture a bass going ‘doop doop doop,’ and a drum kit going ‘bad bad bad tishh,’ and then a guitar going ‘wah wah wah,’ and, like, some shouting? Enthusiastic noises all round.

Aside from Adam Sandler? I mean The Smith Street Band, IDLES, Helena Pop (our cousins in punk), Camp Cope, Shit Present, Self Talk, Jeffo Rosenstock and Courtney Barnett. Mostly it’s people who are stoked about what they’re doing. Honourable mentions to Taylor Swift and Spicy Girls.

Aside from that one time we played a gig where the only payers were Kate’s parents and high school netball coach, there was the show where we snapped two guitar strings before the set even started. We played an entire set without an E or B string on a $99 guitar that was quickly detuning. It was chaotic.

When Joel from Sketch Method told us that was our best show.

Maybe one day we’ll be a real band and go on tour and record albums and stuff. Maybe learn how to play our instruments too? That’s kind of ambitious but we try hard.

Pretty much everything. Every time we hit a new milestone we like to say, “we’re almost a real band!”. Also, Stevo and Jesso like to take the piss when there’s a serious bit in our songs by tearing up some wild dance moves when we’re practicing. That’s always great.

It’s fantastic, the best it’s ever been. We’d be keen for more unashamed pop music, and more new people coming to check out shows. Live music should be accessible to people who aren’t ‘in the know.’ That, and having more faith in local bands. Everyone was a local band once.

STEEEEEEEPHEN. Other things too, but mostly Stephen. Also we’ve been trying to start band beef with h. music since like June, but she’s too good at everything and we like her as a person, so it’s not going well.

What are your upcoming Gigs?

We go to other people’s gigs a lot, so like, catch us there too.