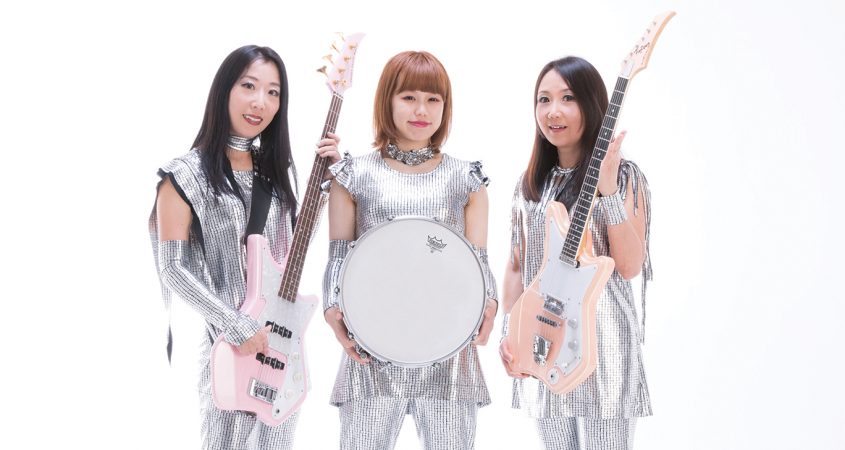 The SHONEN KNIFE story and legacy is incredible. An all-female group formed in 1981 in Osaka, Japan, they went on to influence some of the biggest names in ’90s grunge and alternative music. Yet when I tried to discuss this influence and legacy with singer/guitarist Naoko Yamano, she was incredibly humble and very much focussed on the current activities of the band.

“I just look forward and I never look back and I usually don’t find that so many years have passed since Shonen Knife formed. Also I played for 10 years for my health.” Her dedication to the music itself is probably the reason the group have been admired by so many artists.

Kurt Cobain once said of the group, “When I finally got to see them live, I was transformed into a hysterical nine-year-old girl at a Beatles concert.” He selected them to be Nirvana’s support act for their UK tour before the release of Nevermind. With a variety of other endorsements from grunge and punk royalty, such as Sonic Youth’s Thurston Moore and The Ramones, I was curious as to which of these associations she was most excited about.  “Um, Nirvana,” she chuckles. “The tour with Nirvana became my very, very good experience. All the members are very good persons so the tour was very fun.”

I just look forward and I never look back

So how did a group from Japan in the ’80s become so well known around the world? “A tiny record label called K Records in Olympia in Washington State. I had a letter from Calvin Johnson from K Records that they wanted to release our cassette album in 1985 and we released our cassette album from K Records. Then the Sub Pop founder Bruce is a friend of Calvin’s and we had a chance to release a Sub Pop 100 song and many people listened to it and we could have very good chance to play in America.”

“We released our vinyl from Japanese tiny record label and our record sold at import record stores all over Japan and Calvin Johnson from K Records came to Tokyo and he bought our records and there was a contact address of Shonen Knife and he sent a letter to me and offered that he would like to release our album from his label. It was long time ago and there was no internet so everything went very slow.”

The group have released an album of Ramones covers and you can certainly hear this influence in their original work, so I wondered about the relationship between the two groups. “In 1998 Shonen Knife opened up for Ramones shows in Osaka. It was the farewell tour of The Ramones and they had two shows in two days and we opened for The Ramones for two days, and after the show all of us went to a restaurant and we talked. Also in New York at our show, Marky Ramone played the drums for our show and also in Los Angeles I saw Joey Ramone and we played together on stage.”

Besides The Ramones covers, the group have many other great cover songs (my first experience of the band was their contribution to The Carpenters tribute album If I Were a Carpenter). I wanted to know if we could expect any of these in their set. “Not so many. We usually play one or two cover songs for one set. Of course we pick some songs from our latest album so for this tour we will pick songs from our latest album Adventure, but other than new album it’s very, very difficult to pick songs out because we have I think more than 20 albums, I cannot count, so many. So it’s difficult to choose. Also every country or city’s fans have their taste so I’m trying to choose songs which our fans there love.”

With such a long, successful career, the group have performed at various festivals and venues, so what are their favourites? “I like to play big, open air festivals because the utmost fear is ahh … peaceful. Of course we played the Big Day Out in 1997 and it was fantastic. In the ’90s we played the Lollapalooza festival in America, it was cool too.”

With such a fascinating and original history and variety of musical endorsements I keep imagining an amazing documentary on the band. Has anyone else ever thought the same of them? “Mmmm long time ago, I think it was ’90s Japanese TV station made a short documentary TV program for us. Also I have published a book called Shonen Knife Land. It includes some manga cartoons drawn by my friend and me also some pictures and drawings and some other details. Recently we don’t have such opportunity so if we can we would like to do. I think our experience is too unique for regular Japanese people and music scene. I don’t know if they can imagine or not.”

It’s the group’s fourth visit to Australia. Where does Canberra fit in this history? “I think it will be the first time. I’m so excited to go to Canberra. It is the capital city of Australia so I should go.” So lucky Canberrans, if you want to experience one of music’s most influential acts still around, and be part of history, you’ll be excited too and won’t miss out on this amazing opportunity.

SHONEN KNIFE, supported by GLITORIS and SENYAWA, are at The Basement on Thursday September 28. Tickets are $39.80 + bf through Oztix.