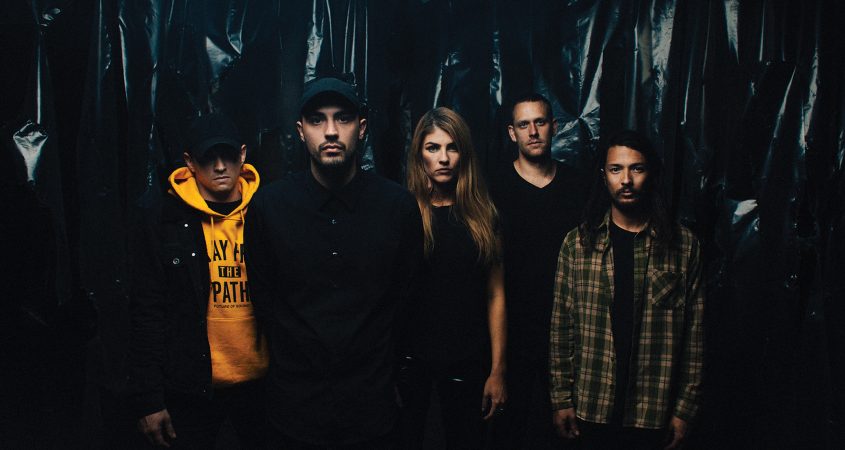 Perth’s MAKE THEM SUFFER are arguably one of Australia’s most successful deathcore/metalcore bands in recent years, cementing their place among other Aussie metal bands like Parkway Drive and The Amity Affliction. The fivesome has released three albums: Neverbloom in 2012, Old Souls in 2015 and now Worlds Apart in late July. Their lyrics weave stories of morose mythology and the rollercoaster ride that is the human condition.

I spoke to lead vocalist Sean Harmanis during their North American tour to talk about what they are missing out here back home. Spoiler: it is winter. Though it is summer in ‘Merica, Sean told me that members of the band had contracted a common cold while abroad, but were determined not to let it affect their shows while giving the USA a taste of what Aussie metal is like.

I asked Harmanis how to describe Worlds Apart. It was simple: “An otherworldly metal album with deathcore, metalcore vibes but with not as many tropes of those genres.”

After blurting out my praise for Worlds Apart and naming my picks, Harmanis agreed his favourites were ‘Vortex (Interdimensional Spiral Hindering Inexplicable Euphoria)’ and ‘Dead Plains’. He admitted, “Usually I don’t like the heavier tracks on an album, I like the more melodic ones but since there’s so much melody on the album the heavy songs stand out more, comparatively.” It was apparent that he was proud of what the band has achieved. He described the songs as including “adventure”, “wonder” and especially ‘Save Yourself’ as “extremely personal and packed with emotion, something I’m almost proud of myself for doing … and empowering.” This is the closing track of the album that ends with a moving spoken word monologue.

With the Australian tour coming up in September, this will be our first introduction to the new album live in concert but also to the new members that have joined this year – Jaya Jeffrey on bass guitar and Booka Nile on keyboards and backing vocals. Harmanis stated it’ll bring “a different dynamic to the stage … expect a lot of enthusiasm and energy.” You’ve been warned, this tour will destroy! Harmanis described how Worlds Apart differs from the previous two records: “Thematically, conceptually, it’s different in terms of the lyrical content … the extra layers we’ve chosen to add over the top of the guitars reflect more of a spacey nature. [The guitar playing] is more intuitive and more creative. A unique flavour and character.” Within the ten songs you can understand where Harmanis is coming from – the dizzying guitar work on ‘Power Overwhelming’, the barking delivery of the vocals on ‘Vortex’, the playful, upbeat pianos of ‘Uncharted’ and the digital hums of the interlude ‘Contact’. Prepare yourself for this mosh pit.

MAKE THEM SUFFER, supported by WAGE WAR and ALPHA WOLF play at the Basement Wednesday September 20 at 7pm. Tickets are $24.50 via Oztix.