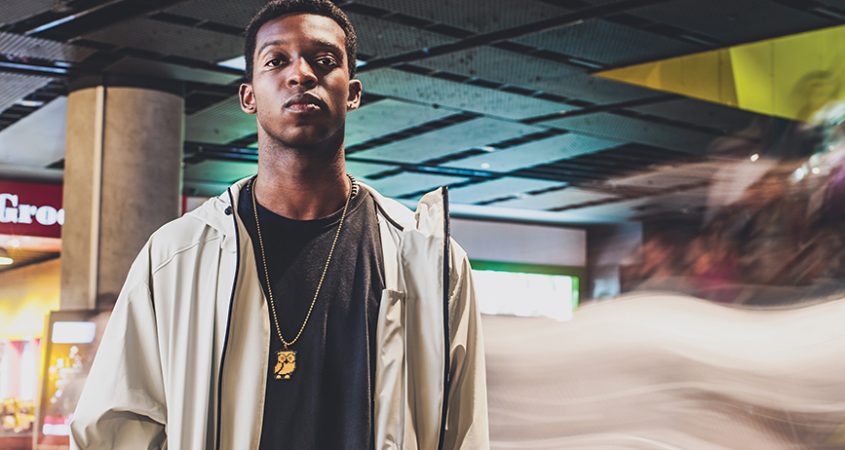 The striking opening track of CITIZEN KAY’s new album, Belly of the Beast, features what is essentially two minutes of breathing. It’s a change from his previous album, which opens on the upbeat ‘Welcome to our World’, and serves as a reminder both for him and the listener: “I wanted to be very clear that it wasn’t the same sound as the last album. This was me saying “‘Don’t expect to hear what you heard in the last album.’”

Kojo Ansah is a very expressive dude. This expressiveness is clear from his live shows and at times is almost audible on wax. For these reasons, it was best to track him down and have a chat in person at his new studio home in Mitchell, so as to capture all his energy. Considering he’d just moved here from his historical home studio, which “started with a Singstar mic and a Windows ’98 computer – that was the jam,” it was a good chance to compare the energies.

Anyone who’s ever seen Citizen Kay live will realise that the energy is an essential part of the process. So when he moved from his home studio to the spot in Mitchell where this interview took place, it was important to note a couple of changes. Despite a few downsides to the area, (“[I’ve] gotta take in to account exterior noise, I’ve only just noticed that because I’ve only been here at night, something that I need to take in to account,”) there are clear positives.

“I can make as much noise as I need to,” he says. “It’s dope. Most of the main gear in here was in the home studio the other space was like a 3 by 3-metre room. Having people coming through, there wasn’t enough space to do stuff.”

Additionally, the larger space allows for this: “Bruh, hand gestures for every rapper is essential, it’s what you do. Either eyes closed, complete in the moment, or – fucking – I don’t know if you can HEAR how much air is flowing through my hands right now.”

With energy being so much of his personality, you have to wonder if that translates to how he takes it in to the studio. “Not necessarily. Depends what the song’s about. For me, on record, you have more of a chance to express what the song’s really about. Doing it live, you really have to take that energy and times it by like 13.”

On the other side of this energy is how emotionally open it leaves him, which he channelled more than ignored on the latest release. Inspired by artists like Kendrick Lamar and Anderson .Paak who use their voice fluctuations to convey emotion and meaning, Citizen Kay took this and ran with it.

“You can say something, depending on the tone and how you say something can completely change how people receive it, so being comfortable with that vulnerability and realising it was a strength to be vulnerable on the track.”

Every artist will have an opinion of the best means of consumption of their tunes, and with the latest album, Kojo put it like this: “If you wanna listen to what I’m saying, definitely the record player. Listen, grab some headphones, head to your own space and do your own thing. If you just wanna vibe out, live show for sure. In terms of articulating what every song’s about, on record definitely because I’m able to spend the time, make sure my tone is right, y’know, whereas with the live show I kinda just yell at people.”

The sound of the new album is different from his previous works, and this is most audible on ‘Who Are You’, the ‘slow jam’ song, where he used a tone of voice he’d never used before.

“That tone I specifically had to record when I’d just woken up. I know my voice changes throughout the day, but that song I knew I needed to sound kind of sincere and more emotional and I know that ‘just woke up’ morning voice was kinda the tone I wanted. I had to make sure I recorded it one morning. I woke up one morning and was like, ‘yeah, I’m gonna record this,’ like, I woke up and put on a bathrobe – that was the good thing about the home studio.”

If you kept on top of the album’s press clippings, one of the most interestingly phrased pieces went along the lines of “Citizen Kay has self-consciously developed his writing style”, which is an odd way of putting it. It isn’t quite as implied, but is somewhat similar.

“[I] self-consciously went in thinking I had to go in and step up my game lyrically, like went in like, ‘how you’re saying things for this album, do it right.’ With the last album, I intentionally simplified how I said things, I wanted people to hear what I’m saying and understand what I’m saying, whereas with this I wanted there to be some kind of layers to it.”

One of the most powerful moments on the album is the sample used throughout ‘Barred’. The sample, a Facebook rant from Tony ‘Jack the Bear’ Mantz, gives his thoughts on the tribulations of Indigenous Australians.

“It connected with what I understood about the Indigenous situation, I actually don’t know much about it. He was able to articulate that, exactly what I was feeling, into words and that, coupled with other experiences I had, fit that song perfectly.”

The inspiration for the track came from an interaction he had with Briggs, noted Aboriginal rights activist and rapper, on Ice Cube’s most recent Australian tour. The use of the sample was inspired by Mantz’s aggression, which contained a “rawness” he wanted to continue throughout the whole album.”

The album started in production on Illy’s Swear Jar tour, where the drummer played Kojo the beat for what would eventually become ‘Who Are You’. Throughout the tour, he honed the song, and worked on other ones in secret, until those songs became the album. In an interesting twist of fate, the album’s release date was the first night of Illy’s most recent tour, on which Citizen Kay is performing. Just as the album cyclically starts and ends with a moment to relax, as at the start of ‘A Moment to Breathe’ and the end of ‘Static’, so too did the album cycle with Illy tours.

CITIZEN KAY is currently on a nationwide tour with ILLY and plays Transit Bar on Saturday October 14. Tickets $15 + bf via Moshtix.

Support Matt Parnell on Patreon!
11% complete
When we reach $500 per month we will begin the official BMA Podcast. This will include interviews with some well-known musicians and artists, tips and tricks for publishing in print and online, as well as other discussion topics around Bands, Music and Arts in Canberra!