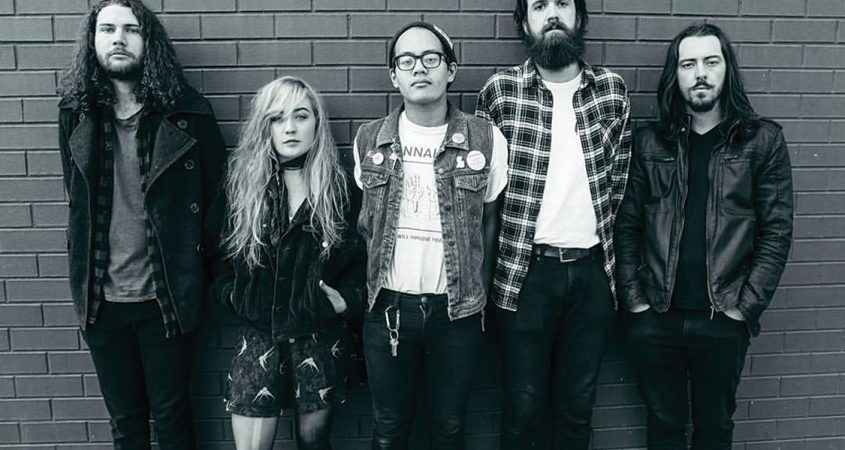 “Can you put in the article that I’m wearing this, like, green silk robe?” asks Azim Zain of AZIM ZAIN AND HIS LOVELY BONES from across the couch. That’s one of the perks of taking an interview in your living room – you get to own the space, own the narrative.

It’s mid-morning at our unit in Belconnen, the house we’ve both ended up in. We’re chatting about the Bones’ new release. It’s called Between Who We Are and Who We Used To Be. That’s not the kind of title one arrives at randomly.

Part of me was like ‘end it now, autotune it, I don’t care, just leave me alone’

“I actually had that name way back when we were making Monsoon Season,” says Zain, referring to the band’s 2016 debut. “Way before then even, I had it in the back of my mind. I’m in this weird transitional period in my life right now – trying to be a real adult, getting a big-boy job, using my law degree, learning how to better cope with my mental health and all that kind of stuff. To me, that title felt right to bring out.”

The EP’s five tracks chart the evolution of the band itself, which now functions like a collective of over-active musicians. Try drawing a Venn diagram of Ella Hunt, Jimmy Marchet, Sammy O’Brien, Tim Douglas and Zain’s various interconnected side-projects (Helena Pop, Jim Dusty, Elk Locker and The Lowlands among others). It gets complicated fast.

“I feel like now the band’s transitioned away from being ‘hey, it’s Azim Zain, the solo indie-emo-folk project with band,’ to like, ‘we’re Azim-Zain-and-His-Lovely-Bones, the indie rock-emo-sadcore band thing.’ And to really get that sound that we have now, I felt we needed heavier production.”

To achieve the huge, punchy sounds on new tracks like ‘Becky Lynch,’ and older ones like ‘Am I Getting Paid For This’ (formely ‘Bushdoofs’), the band headed to The Brain Studios in Sydney to record with renowned hardcore engineer, Clayton Segelov.

“With Clayton, he was just like, ‘I’m just here to push you to get the best take you can.’ It was like, ‘I’m here to work around what you want to do.’

“The number of times I tracked this one vocal passage in ‘Dreams I Could Recall,’ the ascending thing before the chorus, I stuffed that up so much in the studio. Part of me was like ‘end it now, autotune it, I don’t care, just leave me alone.’ But we got it in the end.”

For Azim Zain, the songwriting process stretches way back to the years he spent growing up and finding his voice as a teenager in Malaysia.

“I first started writing songs when I was maybe 15 or 16,” he says. “They were objectively terrible. That’s when I started playing in my first originals band. At some point the rest of the band wanted to go in the Nickleback-meets-rap direction, which I just—it worked out well that I was moving to Australia anyway.

“I was one of those people who could never sing growing up. I had to just slowly learn how to do it over years and years, annoying my neighbours and practicing in my room. In my late teens I started listening to Bob Dylan and I thought to myself, ‘oh yeah, Bob Dylan’s a fucking terrible singer, but people fucking love him.’ But that’s because he writes damn good songs with good lyrics, and so I started making a concerted effort with my lyrics.

“As a byproduct of writing, and putting so much thought into it, it became a vehicle for me to process all this energy, and all these complex emotions that I can’t really talk about.”

Control and self-awareness always seem to be at the front of Azim Zain’s mind. Thinking critically about the way he comes across is something that extends into his songwriting as well, and takes a certain level of self-trust.

“I used to be lyrics first, then music,” he says. “But then, because the lyrics could get too weird and wordy, a bit too much like poetry at times, it became difficult to not fit them into songs that were long, rambly, seven-minute-long, acoustic folk ballads. So I decided to swap it the other way around. I thought, if I come up with a good melody and a good hook first, I trust myself enough to come up with some decent, honest lyrics. ‘Dreams…’ is sort of the culmination of that. It’s like ‘hey, I can sing now, I can write now, and I don’t need all those unnecessary bells and whistles.’”
Zain is adept at juxtaposition, to the point where the swaying bodies at Lovely Bones’ notably high-energy shows might not always realise what they’re dancing to.

“Early in the EP, ‘Becky Lynch’ is all about body image issues,” says Zain. “How I’ve had them my whole life and how they’ve led to me having debilitating anxiety attacks. But it’s hidden underneath a fun, dancy song. Whereas going to the end of the EP with ‘Anticharisma’, which is purely about being super depressed and—well, let me put it more optimistically. ‘Anticharisma’ is about looking back on that period my life and thinking ‘have I recovered, have I gotten better at dealing with being depressed?’ The ending is meant to be quite life-affirming despite the content of the rest of the EP.”
Azim Zain and His Lovely Bones capture that, as anyone who’s witnessed Anticharisma’s “And you ask if I still want to die” hook first-hand can attest.

And that’s one of Zain’s great strengths as a songwriter, and of the Bones as carriers of those songs. ‘Becky Lynch’ and ‘Dreams I Could Recall’ brim with warmth and tightness; they harness those complex emotions, the expression of those seven-minute folk ballads, and channel them into something people sing along to. I ask Zain whether his outlook is shifting as a result.

“I do feel a bit more optimistic,” he says. “I’m still a miserable anxious bastard all of the time, but I reflect those things that make me anxious and miserable. And hey, I have changed in a way in that I’m better at dealing with this sort of stuff. I guess the angst is at the heart of all Azim Zain songs.”

AZIM ZAIN AND HIS LOVELY BONES launch their new EP on Saturday September 23 at The Phoenix. More info at lovethephoenix.com

Support Hayden Fritzlaff on Patreon!
9% complete
When we reach $500 per month we will begin the official BMA Podcast. This will include interviews with some well-known musicians and artists, tips and tricks for publishing in print and online, as well as other discussion topics around Bands, Music and Arts in Canberra!