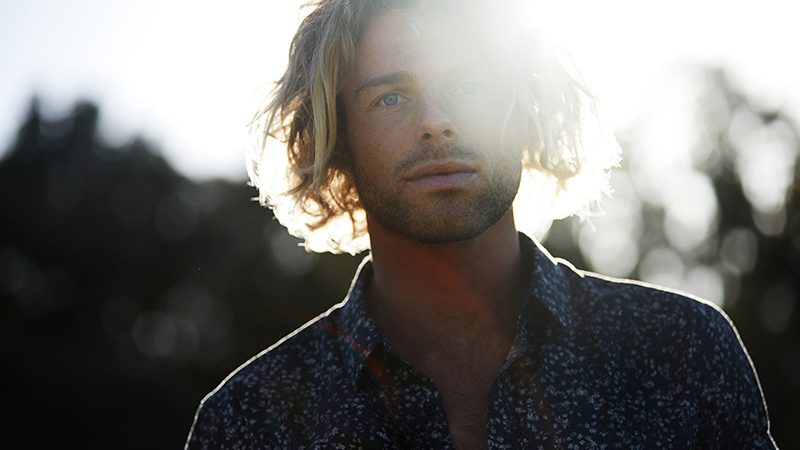 The artistic process of writing and recording an album is unique to every musician. For Australian singer-songwriter KIM CHURCHILL, this process included scrapping the record he had spent 18 months working on and composing a collection of entirely new songs. The result is a piece inspired by honesty, simplicity and experimentation.

“I called the album Weight_Falls because it really felt like an enormous amount of weight had fallen away and I was finally able to just speak and emote and express myself clearly through the music,” says Churchill. “I don’t think I hadn’t done that in the past, but it’s always a challenge, especially when you have a little bit of success and your ego kind of kicks in … that gets in the way.”

In Churchill’s own words, throwing out an album can be a very dangerous move for a musician, but for him, it was very grounding.

“In that moment I had this, I don’t know, oddly liberating moment of clarity. I think if you lie to yourself for long enough, when you finally come clean you have maybe this week or two of seeing the world with a really beautiful sense of clarity and understanding of how to be honest, because you’ve deprived yourself of it for so long, and that’s what I was chasing in the songwriting for this album: a certain level of honesty.”

Due to the short timeframe he was left to work within, Churchill tells me he turned to GarageBand to help with the initial establishment of his new work. This allowed him to take his naturally acoustic sound and play around with it, cutting up parts and developing vocal harmonies.

“I was really inspired by Portishead, you know, twenty years too late,” he laughs. “I think I just sort of stumbled across a new sound.”

“In that moment I had this, I don’t know, oddly liberating moment of clarity.”

As a multi-instrumentalist, the genesis of this sound came quite organically, as Churchill was able to create the parts himself. But for live shows, he tells me he will be playing with two other drummers, who will also provide the vocal harmonies.

“The result has been kind of exciting, because now, rather than just me being onstage, I’ve got two drummers, a carousel of craziness.” Churchill is keen to represent all the intricacies of recordings in a live environment, and has found the best way to achieve this is by giving his band members agency to be playful and inventive.

“I made the music in a very relaxed, not serious way. Although it took a lot of rehearsal to bring it to life, now it’s very much about fucking around with it, having fun.”

Churchill mirrors this opinion when asked how he would categorise the Australian ‘sound’, and his role in its development.

“I think there is a certain simplicity to what I do which is inherently Australian and I think that’s what we have to offer the world, in a sense.”

This attitude, he believes, creates an encouraging climate for young, emerging artists. He applauds platforms – like triple j and triple j Unearthed – that give a place for new music to be explored in a supportive and accessible way.

“I feel like seven or eight years ago it was a lot tougher. [Now] it’s nice to see bands being kind of lifted up and loved. It’s a good time for Australian music.”

Weight_Falls will be available worldwide on August 25. KIM CHURCHILL brings the Weight_Falls Australian Album Tour to The Street Theatre on Saturday September 16 from 7:30pm. Tickets $35 + bf through thestreet.org.