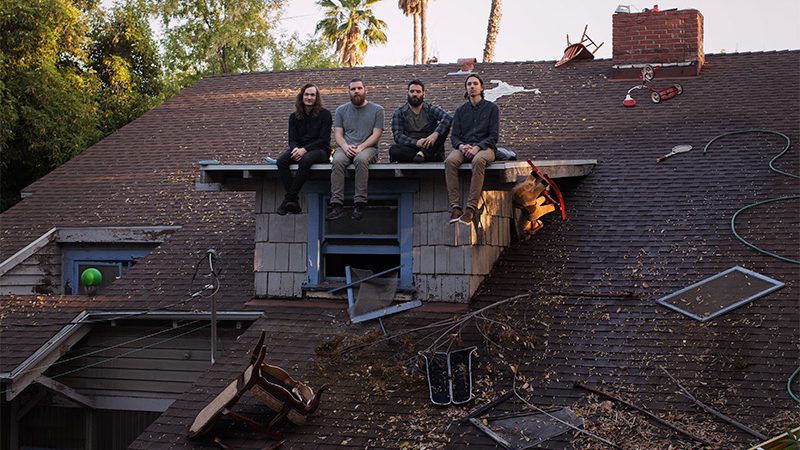 After almost fourteen years of writing music, MANCHESTER ORCHESTRA have never looked back. Through line-up changes and side projects, remaining original members, vocalist/guitarist Andy Hull and guitarist Robert McDowell have always moved forward. From their breakthrough sophomore effort, Mean Everything To Nothing (2008), to the progressive rock inspired Simple Math (2011), to their ode to punk rock, Cope (2014), Manchester Orchestra have always kept the wheel turning with a new style to inform their sound. This year’s A Black Mile To The Surface (2017) is yet another chapter in the band’s diverse catalogue.

“I try and look at our records sort of like a filmography,” says Hull when asked about the band’s new record, “Cope was our ode to making a punk rock record … and it felt like the time to really dedicate ourselves to doing something like that. So [then] it really came down to how do we make a Manchester record we haven’t made before.”

A Black Mile To The Surface is more cinematic compared to the band’s previous effort. Where Cope was filled with chunky guitar riffs and heavy drums, the new record features more space. Keyboards and strings are primarily used to delicately colour the record as opposed to painting the canvas with guitars.

“That score [Swiss Army Man] taught us how to utilise really small bits of time and make fifteen seconds really punch you in the heart somehow.”

“We really just spent a ton of time focusing on getting the songs to a place where we were all very excited and inspired from them,” Hull says of recording A Black Mile To The Surface. “It was basically everyday saying, ‘have we done that before? Oh, we have? Alright throw it away, let’s do something different.’”

Hull and McDowell worked on a side project together before recording A Black Mile To The Surface, which had a great influence on their songwriting. The two musicians were approached by directing team Daniel Kwan and Daniel Scheinert (a.k.a. Daniels) to score their upcoming film, Swiss Army Man. The two directors had worked with Manchester Orchestra before, directing the music video for their single, ‘Simple Math’. Hull and McDowell sent Daniels a sample song (which ended up playing during the film’s credits) and it was all systems go from there.

“That score [Swiss Army Man] taught us how to utilise really small bits of time and make fifteen seconds still punch you in the heart somehow,” Hull says. “The second thing it taught us was how to create atmosphere and sonic landscapes instead of just the song … there’s this whole other blanket or clothing you can put on a song. It really taught us a whole new set of tools.”

After listening to the score for Swiss Army Man it becomes fairly clear how it informed A Black Mile To The Surface. The film revolves around a man (Paul Dano) finding himself marooned on a desert island. Dano’s character is mentally unstable and suicidal until a talking corpse (Daniel Radcliffe) washes ashore. The score does well to compliment the feeling of isolation felt by Dano’s character, as well as the peacefulness of the desert island.

The majority of the tracks consist of only Hull’s vocals. Recorded and played back in various ways, Hull and McDowell use the former’s voice to create an ethereal space around the film. Orchestration and synthesisers are used at parts of the score but always sparingly. The techniques for creating spacious sonic landscapes exhibited by Hull and McDowell on Swiss Army Man have clearly been carried onto their new record.

“There is something inside of me and Rob where a certain thing hits, and when we finally have found it we can both look at each other and go, ‘that is what we were talking about.’” Hull says of exploring new sounds, “I feel fortunate to have him and the rest of the guys in the band … being so dedicated to putting in the really, really tough time of figuring out how to make everything work.”

Manchester Orchestra have gone through some line-up changes over the years. Hull and McDowell are the only original members left in the band, but a revolving set of musicians have seemed to help the band progress. The departure of members has forced Hull and McDowell to approach new areas of Manchester Orchestra. This has helped them explore new sounds within their indie rock style.

“When people realise that they don’t want to [play in Manchester Orchestra], and then you have the ability to replace that person with somebody that really wants to do it, and who just so happens to bring another element of musicianship. That part of it has even been relatively easy,” Hull says. “For [A Black Mile To The Surface] in particular, our keyboard player had left the band and that basically allowed Robert and I full uncharted territory of getting as weird as we wanted to with every keyboard we could find. It allowed us to create another character for the album.”

Despite the cinematic aspect of the new album, Manchester Orchestra have not found it too difficult to translate the songs to a live setting. Not comfortable playing with tracks, Hull says he would prefer to lose the “third keyboard part” of a song than sacrifice the rock show element of their concerts. Manchester Orchestra are currently touring North America, but are planning to hit Australian shores midway next year.

A Black Mile To The Surface by Manchester Orchestra is out now on Lorna Vista Recordings.

Support Thomas Spillane on Patreon!
12% complete
When we reach $500 per month we will begin the official BMA Podcast. This will include interviews with some well-known musicians and artists, tips and tricks for publishing in print and online, as well as other discussion topics around Bands, Music and Arts in Canberra!