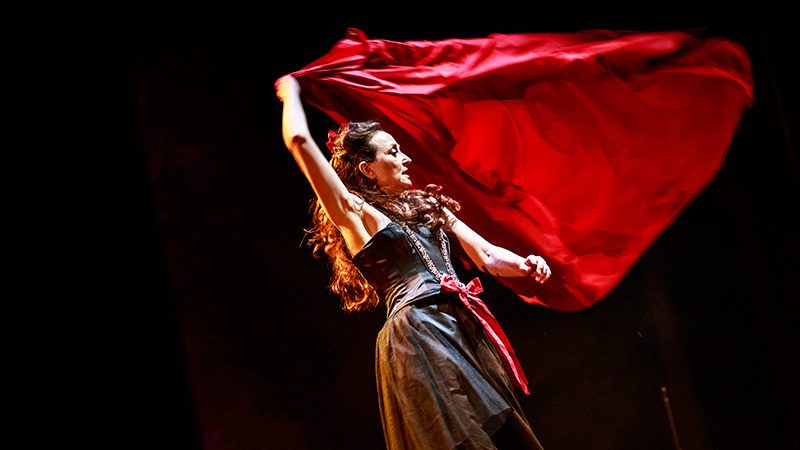 BMA asked director Moira Funicane what it was about Lola Montez, that made herself and creator Jackie Smith decide that Lola’s life story had to be brought back to a stage show 162 years later.

“In 2012 we toured Caravan Burlesque around Australia,” says Funicane. “And when we performed in the goldfield towns people often said: ‘you’re the wildest thing to come through this town since Lola Montez!’ Well, we had to find out more about this fascinating woman, and Ballarat and Lola have a very special relationship; she even horsewhipped the editor of the Ballarat Times for giving her a bad review!”

Whilst Funicane and Smith are well known for the way they redefine burlesque performance genres and expectation, this theatre production will present something else completely.

“THE EXOTIC LIVES OF LOLA MONTEZ is a rollicking mix of storytelling, burlesque, dancing and song with fantastic sensibility,” says Funicane. “Very appropriate for Lola herself who ripped through the colonies with a variety show. Featuring stories and songs and mayhem, and of course the highlight of her repertoire was her notorious Spider Dance. The show is such a wild adventure – a swashbuckling cocktail of song, dance, story and dazzling costumes, and when we kick back in the Lola Lounge with our audience the party just keeps going!”

When asked about the key performers, actor Caroline Lee and dancer Holly Durant, Funicane states, “Holly is a kind of modern day avatar for Lola in this production. Lola introduces Holly as her natural heir apparent and yes, she does a couple of spectacular turns as well! Caroline Lee is a brilliant and commanding actor and has fully embraced the text and physical world of The Exotic Lives of Lola Montez. We have worked with her in previous productions – including Jackie Smith’s play The Flood which toured nationally and last year it was the first Australian Drama to be presented at the Shanghai International Theatre Festival. Thrillingly Caroline Lee is also a direct descendant of Lola herself!”

After opening week in Melbourne, Finucane, Smith and cast are travelling to over 25 towns and cities in just ten weeks with a couple of major cities (including Canberra) being lucky to have the production presented in local art centres.

“Our experience of travelling nationally has always been such a rewarding one,” says Funicane. “Every town is a new experience and every audience have their own stories to tell. Lola is an inspiration for so many people; an uninhibited, bawdy fierce woman who took on life with lusty passion. Her touring style might not have been sustainable in modern context; with near arrests and scandal following in her wake but like Lola, touring with passion for our show and our audiences, and with a sense of adventure and joy is paramount.”

Canberra – get ready, The Exotic Lives of Lola Montez will be in town at the Tuggeranong Arts Centre for one night only on Wednesday September 13 from 8pm. Tickets $40 through tuggeranongarts.com.