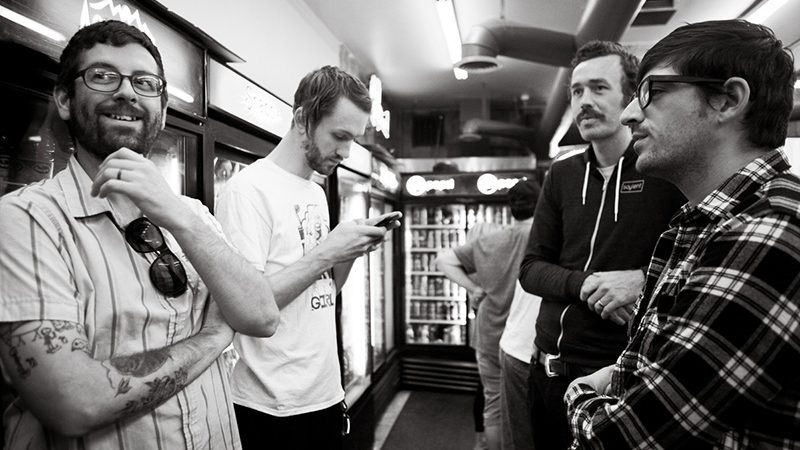 “It’s hard to tour with bands if you’re a casual fan, or even if you’re a big fan. It can be kind of disheartening to reach out to them and get ignored so I don’t do that anymore.” I felt a bit the same when I found out I would be speaking to Sean Bonnette, vocalist/guitarist of AJJ (formerly Andrew Jackson Jihad) as he is one of my favourite lyricists. I think I contained my excitement just enough to get to ask him all the things I wanted to know about one of the most original bands returning to Canberra.

The group were last here supporting the Smith Street Band at the now defunct Magpies Club, where they put on a show that garnered many new fans. “Oh hell yeah,” says Bonnette, recalling the show. “Canberra is like the political centre of Australia right, where the government is based? Oh yeah that club was weird and cool. I can see a place like that not lasting for very long. I think I had Nando’s for the first time and a really fun skate, and the show was cool.”

What makes AJJ original is their mix of sounds from folk to punk to indie and many spaces in between. Their songwriting is unique, but their lyrics are especially incredible. “I love talking about that stuff,” says Bonnette. “I wrote my first song when I was like 17. I definitely wanted to write songs and music but it didn’t really click until then. I think that was because my first instrument was bass and I didn’t really have people to play music with. It was when I got an acoustic guitar and that was when I learnt how to play cover songs and then I would just turn those cover songs into my own songs. That’s why every song I wrote sort of sounds like a Smashing Pumpkins song.”

As to whether the lyrics or the melody comes first, “They usually come at the same time. The shape and sound of the word will generally influence the melody.”

Their original, eclectic sound appears to draw upon a variety of influences. “Absolutely,” agrees Bonnette. “That is incredibly true. Different influences come and go, and come in with different people. Currently one of my big influences – because I was so late coming to the game – was David Lynch and I’m now playing catch up. It took me a very long time to appreciate the work of David Lynch because I brought a set of expectations that ruined the work for me and I didn’t really see what was going on.

“I would just turn those cover songs into my own songs. That’s why every song I wrote sort of sounds like a Smashing Pumpkins song.”

“Watching the new Twin Peaks has rekindled my interest to revisit his works and man, what a fucking badass. I read his book and he talks a lot about his process and I can see definite similarities between the ways that he makes something and the way that I do. His process is very exploratory. He gets ideas in his head and then uses film as a way to make those ideas happen and he chooses to make sense of it after the fact. He’s not really focussed on ‘I’m gonna make a movie about this.’”

I particularly enjoy the themes of Bonnette’s songs. They often describe triumphs over life’s difficulties but in a somewhat quirky, creative way. One particular example that appeals to me, as a disability advocate, is their ongoing references to Temple Grandin (if you don’t know who she is, please go to her YouTube now, or take the cheat’s way out and go watch the Claire Danes movie about her).

In ‘Temple Grandin’ AJJ reference her amongst Stevie Wonder and Helen Keller in a song about overcoming adversity. In ‘Temple Grandin Too’, they sing, “a hug without a human is alright.” So where did this fascination come from?

“I first found out about Temple Grandin because I have a close family member who is on the spectrum,” Bonnette says. “Anyone who’s on the spectrum knows who Temple Grandin is because Temple Grandin is the one who is able to be such a great voice for those people and has been a major source of empathy for people with autism. I love that about her and she seems like a very cool, eccentric lady, a fellow person from the southwest. My favourite invention of hers is the hugging machine that gives containment and comfort to cows and children.”

The group have received a bit of press coverage recently when Aussie icons The Wiggles made a comment admiring the clothing style of the group in their film clip for ‘Goodbye, Oh Goodbye’. “God bless those guys,” says Bonnette. “Our friend is trying to get in touch with them for us. Were gonna try meet up with them when we’re there.” The film clip is actually a mock of clips by bands like OK Go, who do elaborate filmmaking and stunts often in one take. Given the clip’s humour and creativity I assumed it may have been the band’s idea. “As much as I wish it was our idea, it was the director’s.”

This tour sees the group on a national headline tour that includes the Yours and Owls festival and their first time headlining at Transit Bar. Bonnette is obviously also enthusiastic about his skating and concluded our interview by asking, “Do you know if the skate park is nearby?” He was pleased with my local advice of the park’s proximity to Transit. “Fuck yeah, it’s on. I almost died at that park.”

Catch AJJ at Transit for the show, or at the skate park afterwards.

AJJ play Transit Bar on Saturday September 30 from 8pm. Tickets are $32.65 including booking fees through Oztix.