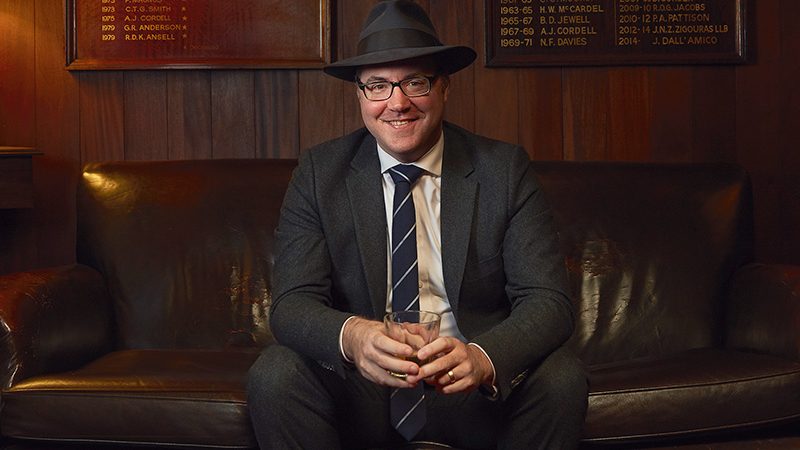 “It’s the job of a satirist to point out the difference between the words and the reality,” says TITUS O’REILY, in our chat ahead of his stand-up tour. O’Reily, who made a name for himself with his written blog, is branching out into stand-up and hits the Street Theatre in September. “We’re doing six shows in six nights – we’re trying to do it all in the bye week, having to cram it in,” is how O’Reily approaches it – a fast paced tour that’s packed in to the one week before the AFL finals series starts. This is fitting, of course, as O’Reily’s self-titled blog is all about taking the piss out of the weekly goings on in the AFL.

“I sort of occasionally talk about current affairs as it links to the AFL. I figured early on that people want to get away from that for a night, there’s only so much Donald Trump or parliament that people want to cover off. There’s links, I guess, but sometimes you want to give people a night off.” He seems to be aware of the fact that, particularly in Canberra, there’s a huge political focus and O’Reily uses his satire to give people a lens through which to see other things.

“A lot of what I say is what footy fans say all the time when they’re watching sport.”

As in most satire, his writing has a slightly biting note and one of the most common recipients of his words are the AFL media and commentary. “Sports coverage is ex-players, and it’s a closed shop and they’re all mates and don’t like to criticise each other, or the media. A lot of what I say is what footy fans say all the time when they’re watching sport. I found it was an ability to convey a fan’s view of how we all feel about the sport.” Being able to write as informally as he does benefits the writing, as he isn’t required to present a viewpoint that is at all times positive.

“I do about an hour of stand-up, which is usually all AFL related, and then Sergio Paradise, who I do my podcast with, joins me for the last half hour and we talk about other sports as well, and we talk about the silliest stories of the year,” is how Titus outlines his show to me. Describing it as a script he writes up, vaguely memorises and then riffs on the night, it promises to be a fascinating show for people who are even vaguely interested in AFL. “My style of stuff is often just making fun of sport, the way it applies to the workplace and our general lives. It works with people who don’t have this sort of intense knowledge.”

TITUS O’REILY hits The Street Theatre on Monday September 4, from 7:30pm. Tickets from $49.90 + bf through thestreet.org.

Support Matt Parnell on Patreon!
9% complete
When we reach $500 per month we will begin the official BMA Podcast. This will include interviews with some well-known musicians and artists, tips and tricks for publishing in print and online, as well as other discussion topics around Bands, Music and Arts in Canberra!