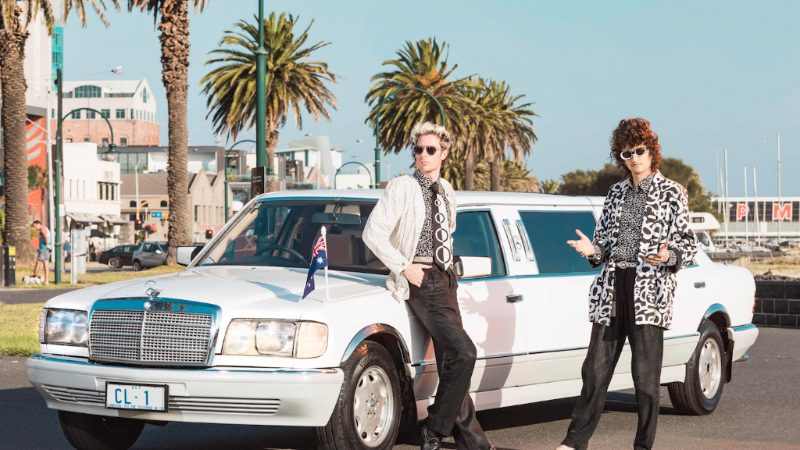 There aren’t many acts that possess both the pulling power and sense of humour necessary to bring out Tina Arena for a set at Splendour in the Grass. Actually, there’s only one: CLIENT LIAISON.

“It so easily could have not happened,” says frontman Monte Morgan. “It could’ve been, ‘oh yeah, we played Splendour and that was that.’ But no, we brought her out and fleshed out our connection and collaboration and it’s been great. She’s now a close friend of ours. Never thought I could say a hero is a close friend of ours, you know. Now she is.”

It’s the latest development in Client Liaison’s rise from retro, office-worshipping synth pop enthusiasts to festival drawcards and regulars on the international touring circuit. The band are all too aware of the image they put forward.

“We like the idea that we create this absurdist Australia,” says Morgan. “There’s nothing conscious about us trying to capture Australia. I guess we’re more just viewing it and taking it in subconsciously. Canberra’s also a bit of an absurd place, which relates to us. Like my father always used to say, ‘we should shut down Canberra. It’s the biggest waste of taxpayer money going ‘round.’”

But far from just being a front, Client Liaison’s mystical, cosmopolitan aura stems from the way Morgan and collaborator Harvey Miller approach music (and life in general). The two respond impassionedly, almost indignantly, to the suggestion that it could be any other way.

“We should shut down Canberra. It’s the biggest waste of taxpayer money going ‘round.”

“There’s lots of different facets to Client Liaison,” says Morgan. “We’ve got the video clips, we’ve got the kind of ongoing narrative, we’ve got us as characters.”

“It’s also in the live show,” Miller chimes in.

“Yeah in the live show, and some lyrics too, but it’s more so. If you listen to our music sonically without a video clip I think people are much less inclined to see the humour. So it is there, it’s supported by a lot of context. It’s one element.”

It’s their steadfast loyalty to good vibes that’s earned Client Liaison such a devoted fanbase. Expect that to continue now that work has begun on the follow-up to their 2016 album Diplomatic Immunity.

“We’ve been going to a few different settings,” says Morgan about how things are taking shape this time around. “About two months ago we went to Byron Bay. We tried to write a song a day. It was a beautiful location and we came out with kind of fun-loving songs. We’d all go off and create a beat. Our port of call before we start writing melody or lyrics is, ‘what is the real vibe?’”

“We’re just trying to write the best songs we can,” says Miller. “We’re not trying to do some abstract kind of left-field thing and alienate our fans. We just want to make people dance.”

“Dance or cry,” says Morgan. “That’s kind of our motto at the moment. Make people dance or cry.”

CLIENT LIAISON return to UC Refectory on Saturday September 9 at 8pm. Tickets are $39.80 through Oztix.