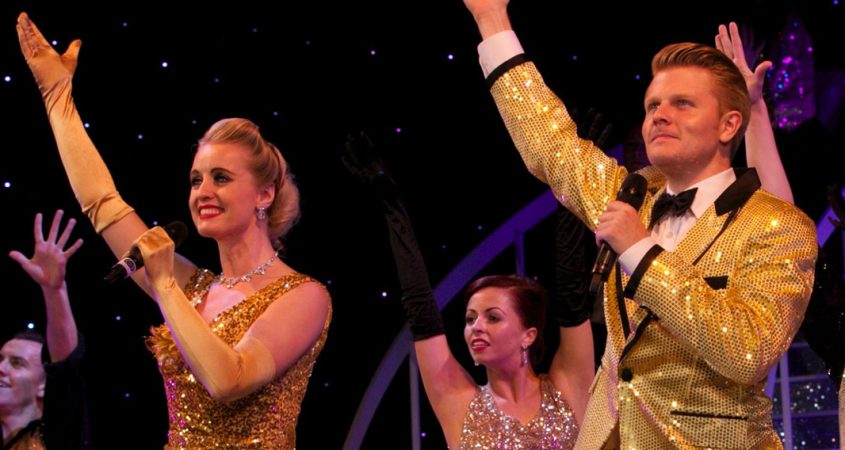 ROB MILLS, Australian Idol finalist and musical theatre star, really loves celery. It’s a crisp morning in August, just before he’s due to go into rehearsals for the new concert show PUTTIN’ ON THE RITZ, and Mills is making himself a stir-fry lunch.

“I’ve got broccoli, carrots and kale,” he says. “But I’m cutting up celery as we speak. And I’m also leaving the leaves in. There’s a tip – put ‘em in your cooking. They’re like spinach anyway. So good.”

He’s on a no-sugar diet – “well, it’s day one. Ugh,” he interjects – in order to prepare for the rigorous demands of touring a singing, dancing extravaganza around Australia. Puttin’ On The Ritz is a show made up of dazzling golden age showbiz tunes. Mills got the call about coming on board a couple of months ago:

“It’s so weird and exciting to get to a point in your career where someone asks you if you want to have a job. They called me up and asked, “Hey, Rob, we think you’re good enough to do this job. Would you like to do it?” And I’m there like, “Sorry, mate, what songs are they? Irving Berlin, Gershwin, Cole Porter? Yeah, I’m in. And with a dance troupe from the West End … I just couldn’t say no.”

The opportunity to sing such iconic music has elated Mills. What is it about these great composers that he loves so much? “I’ve never been able to totally put my finger on what it is. The lyrics are timeless. They wrote love songs, obviously, but they also wrote a lot of storytelling songs, and they wrote them all for a 70 to 30-piece orchestra. One of my favourites is,” he starts singing a few bars of ‘They Can’t Take That Away From Me’, a Gershwin classic. “Just golden.”

“Imagine being able to just walk up and go, ‘wanna have a dance?’ You’re instantly connecting with someone, with their hand and their body.”

Aside from the songs, Mills seems particularly thrilled about the dancing in the show. “From what I’ve seen from videos, the dancers in this show work very, very, very hard,” he says with a blend of awe and kid-like excitement. “The way the show is structured, it’s like: song, song, song, maybe a little bit of chatting, song, song, song. And in every song, there’s incredible dancing happening. Everyone gets their chance to shine.”

Mills then seamlessly launches into a passionate campaign: he wants to bring back casual dancing. He won’t outlaw the “dirty nightclubs with a beat where you just go to sort of … bop,” but he’d welcome back classic moves into the modern era with open arms. “Dancing is so cool!” he says with so much energy the phone crackles. “Imagine being able to just walk up and go, ‘wanna have a dance?’ You’re instantly connecting with someone, with their hand and their body. It’s beautiful. It really is beautiful.”

Mills would know. He’s had a lucrative career in Australian musical theatre for over a decade, starring in productions of Grease and Wicked to name a few. But he’s particularly keen on this production, because, “when you’re doing a normal musical, you’re in the dance number. Most of the time, I’ve been up the front, so I don’t see any of it. I just see the spotlight and the dark crowd. But in this, because it’s set out more like a concert, I get to stand and turn around and look at the dancers. I’m going to experience watching that incredible movement at the same time as the audience.”

I ask what he thinks it is about musical theatre that’s led not only to its longevity, but its ever-expanding innovation. Mills is silent for a long moment.

“For me, good musical theatre is quite possibly the best form of storytelling. Not only are you telling stories through words, but you have the amplified emotion of music that comes in, and you sing that yourself. And on top of that, you have dance. It’s primal. It’s a way of communicating, it always has been, to celebrate things or tell stories. So when those three elements come together … you just feel more than you would’ve felt if it were just people talking.

“Yeah. Good musical theatre heightens the emotion at the same time as it heightens all your senses.” And of course, it’s all about the story being told too. “I managed to see [massive musical sensation] Hamilton in Chicago a few months ago. It was one of the best things I’ve ever seen. The music is brilliant, and new, but it’s also a really powerful, uplifting story. Rags to riches – but you gotta work hard. The American dream. Or the Australian dream, whatever you wanna call it.” He pauses again, grinning audibly. “Yeah. The dream.”

Puttin’ On The Ritz is showing at the Canberra Theatre on Sunday September 3 at 7:30pm. Tickets from $81.90, available through canberratheatrecentre.com.

Support Indigo Trail on Patreon!
7% complete
When we reach $500 per month we will begin the official BMA Podcast. This will include interviews with some well-known musicians and artists, tips and tricks for publishing in print and online, as well as other discussion topics around Bands, Music and Arts in Canberra!