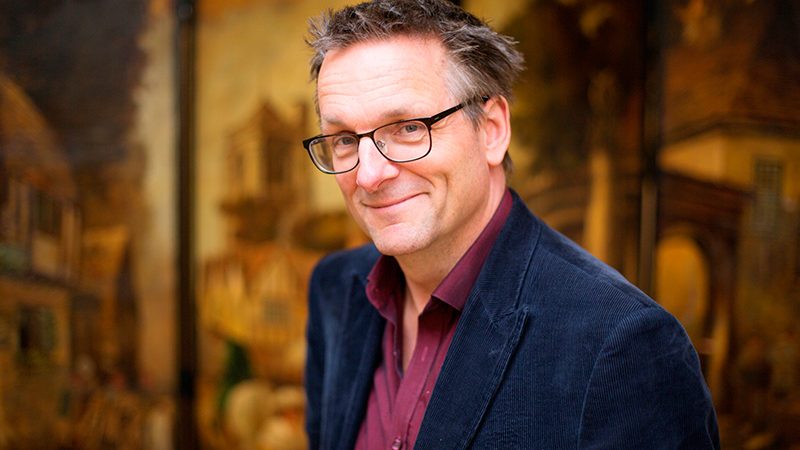 Science communicator, diet innovator and BBC television producer DR. MICHAEL MOSELY has the curious energy of a prodigious young science graduate: clear speaking, hilarious and willing to put his body on the experimental line to extraordinary cringe-inducing lengths – all of which makes it so hard to believe that the man is sixty.

From the very beginning, Mosley has been singularly motivated by “pure curiosity”. Having graduated from his A Levels in sciences, he decided to broaden his horizons and began studying politics, philosophy and economics at Oxford. Despite “hugely” enjoying his study, the world of finance was not quite the same sort of inquisitive environment, lamenting, “I could have been very rich if I stayed there I suppose.” Following his medical re-training, he found himself at the BBC in 1985, from where he has never left.

Despite twenty years of directorial prowess, Mosley was housing an extraordinary presentation talent that only began to reveal itself in 2005. He quickly became known for his guinea pig approach to medical programming, exposing himself to tear gas, extreme sleep deprivation and magic mushrooms. Mosley is governed by a stringent philosophy to prevent the occasion of grievous bodily harm in the process of such activities. “I don’t mind doing things which are painful or unpleasant but I am reasonably confident are safe.”

The doctor has another doctor’s judgement to contend with however: “My wife, who’s a doctor, vetoes some of the more extreme things.”

This came into play on one particularly revolting occasion: “The producer was quite keen that I inject myself with hookworm. It drills through your skin and goes into your lungs, and makes you cough a lot. I chose to go for tapeworm instead, although it sounds much nastier, it’s much less unpleasant. One of the agreements with the tapeworm experiment was that I would get rid of the tapeworm, before it grew to full maturity, because when it does, segments break off, and crawl out of your bottom and she [Mosley’s wife] wasn’t too keen on sharing the marital bed with tapeworm segments.”

It is Dr. Mosley’s fascination with diet over the past five years however that has solidified him as the leading popular medical journalist in the world. Following his shock diabetes diagnosis in 2011, the health innovator rejected traditional advice in favour of his own research, which astoundingly led to a diagnosis reversal and the formulation of his 5:2 diet; two days of heavily reduced calorie intake and five of unmoderated eating. The oft-touted Mediterranean diet forms the basis of this, but it’s not the one that turned up in your primary school food pyramid.

“Full fat yoghurt, modest amounts of red meat, plenty of oily fish, vegetables, fruit, some dark chocolate, and a bit of red wine, particularly with the evening meal and wholegrains. It is a low-ish carbohydrate diet but not low. Quite a lot of fat but in the form of olive oil and fish. There is what we call the blue zone, which is the areas of the world where people tend to have very high life expectancy, there is an area up in the Bulgarian mountains where people live a surprisingly long time, and it seems to have to do with the fact that they consume an awful lot of yoghurt [laughs].”

The growing veganism movement and its assertion of health dominance Mosley does not rave quite so much about. “I think morally I can understand vegetarianism. Veganism is much harder to sustain. You have to make sure that you are getting the right nutrients, which means you have to supplement, because they are not getting it from their diet. One of the biggest problems we have is iron deficiency, typically like twenty percent of young women are iron deficient and one of the best sources of bioavailable iron happens to be red meat. If you’re eating red meat once or twice a week, your health risks and life expectancy are no different to that of a vegetarian or vegan.”

Considering Mosley’s dual expertise in the fields of diet and finance, I saw no greater opportunity now to finally settle the interdisciplinary Australian debate of the relation between the millennial generation’s inability to enter the housing market and their predilection for exorbitantly priced smashed avocado.

“I saw that, quite ridiculous [laughs]. I think the amount of money for a house, you would have to eat an awful lot of avocados. Avocados are very good though, full of very good fat. They fill you up too, and are full of nutrients.” While millionaire moguls are evidently still missing the point, Mosley offers breakfast alternatives for those wanting to avoid twenty-two dollar brunch dates. “I am a big fan of eggs, and they’re pretty cheap so it doesn’t have to be smashed avocado!”

Dr. Mosley’s first trip to Canberra is a long time coming and co-hosting what can only be a wildly entertaining evening is the ever brilliant Julia Zemiro, who will no doubt have Mosley spill both his metaphorical and likely his physical guts on stage come September.

Support Joshua Martin on Patreon!
11% complete
When we reach $500 per month we will begin the official BMA Podcast. This will include interviews with some well-known musicians and artists, tips and tricks for publishing in print and online, as well as other discussion topics around Bands, Music and Arts in Canberra!