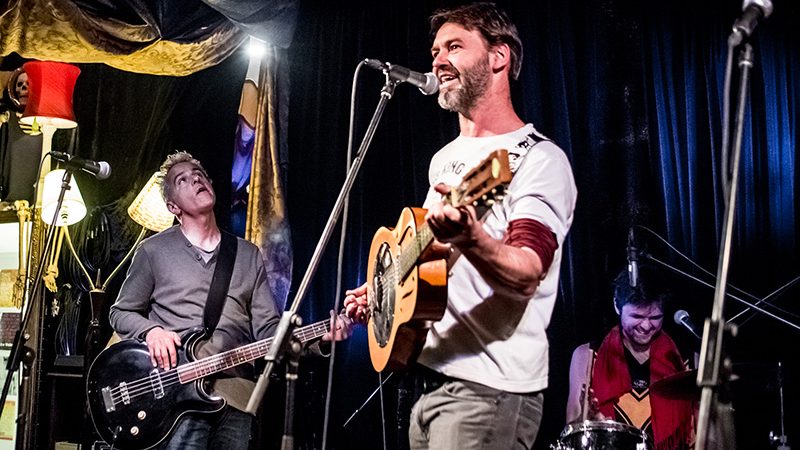 After over two decades of play in Melbourne, and recent expansion across the country, the RECLINK COMMUNITY CUP has finally landed in Canberra for the first time. Historically, the Community Cup has pitted members of the vibrant Melbourne community media scene (The Megahertz) against the local music that they talk and write about (The Rockdogs). The game, whose proceeds go to charity, features live music and entertainment throughout, including some of those who get on the park as well.

In Canberra, the formula is more or less the same, with the musos donning the red, yellow and black of the Lime Stones, and the wider media (including The Canberra Times, the ABC, The Conversation, 2XX and this fine publication) proudly wearing the red and white of the Noise. The Noise have even roped in a recently elected MLA, Mark Parton (formerly of 2CC). Parton even managed to win the raffle at the launch packed full of 2XX merch, which I guess we can now expect to see on the floor of the Assembly.

As one potential Lime Stone, Waterford’s Glen Martin, told me, the Cup will be fought between the Lime Stones and “flailing hacks from failing organisations.”

But while the day is ostensibly a footy match between two historically “rivalling” forces, there will be one clear winner regardless of what the scoreboard says at the end of four quarters.

“Reclink Australia’s aim is to enhance the lives of people experiencing disadvantage or facing significant barriers to participation, through providing new and unique sports and arts opportunities,” local Community Cup organiser Davey J (from 2XX’s The Big Gee Up) said.

The Community Cup is one of Reclink’s major fundraising events, raising more than $100,000 to help people get to a better place through sports and the arts. Reclink relies on the hard work of volunteers to get the Community Cup going, and to provide for those people who need it most. Whilst the game may (will) be fun, raising money to help others is the real purpose of the Community Cup.

Several bands have been lined up to play on the day, including veteran local indie rockers, Waterford, local rocksteady and ska warriors The Kingstons, and the Mixtape Chorus, who will be singing the current and future national anthems (‘Advance Australia Fair’ and the Go-Betweens’ ‘Streets Of Your Town’ respectively).

If you like music, footy or charity, make sure you pick a side and get down on the day. And make sure that side is the Noise.

The first CANBERRA RECLINK COMMUNITY CUP will be played on Sunday September 10 at Jamison Oval. There will be food and drink stalls there on the day, and plenty of entertainment for the whole family. Entry is $10, or $5 for under 12s.