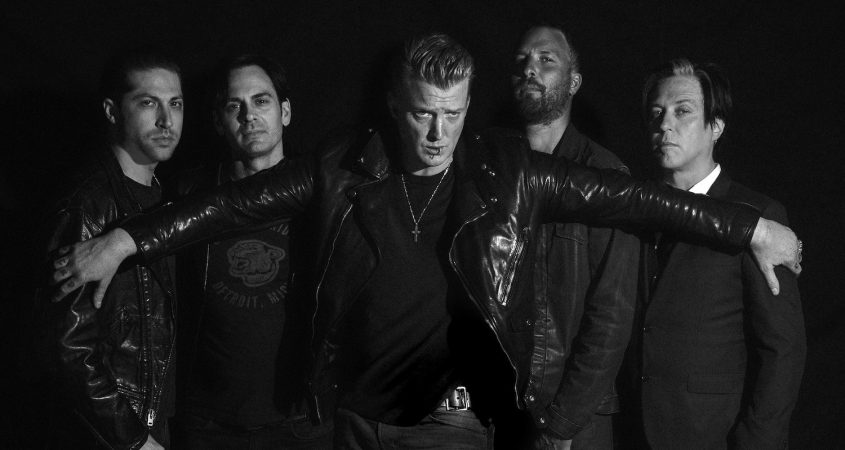 Before descending on Australia for a headlining gig at Splendour at the Grass (and several side shows), BMA got to chat to QUEENS OF THE STONE AGE bass player Michael Shuman about the band’s upcoming Mark Ronson (I didn’t stutter) produced Villains, and joining the band coinciding with the band’s biggest record; 2013’s Like Clockwork (2013).

Shuman, a Los Angeles native had no idea how his career was going to go and fully expected to live out of his van for the next decade. By chance his band/project Wires on Fire was produced by QOTSA touring regular and bassist Alain Johannes.

“I made the Wires on Fire record with [Alain] and his wife. He was kinda filling because [QOTSA] didn’t have anyone for the tour, and they were looking for someone for real. He kinda mentioned me…”

Getting the call from one of his favourite bands was “life changing,” in more ways than one. “I don’t know what my life would have been like without these dudes and the family that we have and that we’ve built. As much as you get to be in a rad band, play cool songs and tour the world it changes everything, every dynamic of your life.”

At the release of 2013’s Like Clockwork, the creative force of QOTSA, Josh Homme revealed to listeners of Marc Maron’s podcast WTF that he had been pushing so hard for such a sustained time on a myriad of projects that he’d almost worked himself to death. His recovery had finally adjusted his unmatchable creative pace.

“When we were meant to go make Like Clockwork, and Josh says, ‘so I got this call from Jon Paul Jones and he wants to go do this band so I’m really sorry, we gotta postpone the record.” I was like good for you, you know, and years later I get this call, ‘Hey man, I got this call from Iggy Pop and ahhh, and he really wants to make this record’. As a friend you say, ‘You gotta go do it’.”

Shuman says the “lyrically vulnerable” Like Clockwork fed off some “tough shit” the band was going through.

“It was just a rough one, not only for Josh but for all of us, and losing Joey [Castillo – in the band from 2002–2012], it was a tough record to make, although we came out of it and there was light at the end of the tunnel.”

“We knew that [Mark Ronson] wasn’t gonna change our sound. He may have been a little nervous stepping into our dojo.”

If Like Clockwork fed off the personal and professional turmoil of the band, Villains is proof that the newly minted line-up has gelled and is, according to Shuman, “the strongest” the band has ever been.

“The first song that we kind of discussed a couple of years ago, Josh played us a really stripped down version of ‘The Way You Used To Do’ – just that riff and the claps – so that was kind of where our heads were at.”

“I think bringing in Mark just helped us be a band and play and have someone, a sixth member to kind of oversee. We knew that he wasn’t gonna change our sound. He may have been a little nervous stepping into our dojo,” Shuman says. “He’s a fan, he gets it. He clicked immediately on a human level but also he’s got a vast knowledge of all types of music, kind of just like us – the glossary was all there.”

Villains begins with Ronson taking you through an 80s/John Carpenter synthetic portal into a series of epic throbbing rock tracks. Ronson brings the technical precision in the production. There’s not a missed note or beat; but it feels electrified. ‘Feet Don’t Fail Me’ explodes with the most chilling bass riffs I’ve heard this year. ‘The Way You Used To Do’ – the only pre-released track – is not out of place in a saloon; the toe tapping flanged guitars are dripping in bluesy cowboy cool. ‘Domestic Animals’ is a song crying out, being swallowed into the wilderness and it rolls and teeters unexpectedly one hiccup out of time but somehow never misses a beat. “Fortress” is the tent pole of the album – connecting this haunting arc but reducing the tempo. It’s a melodic, throbbing love letter where the synthetic notes are like additional strings to their unique set-ups.

‘Head Like a Haunted House’ picks up the tempo, a re-injection of flamethrower energy. It’s the purest punk since QOTSA circa their self-titled (1998) or Rated R (2000). ‘Un-Reborn Again’ – the most Modest Mouse track title possible – it’s QOTSA signature percussive rock transposed with a misty psychedelia. ‘Hideaway’ is like the candy house in Hansel and Gretel, a honey tongued promise that ends in being consumed. ‘The Evil Has Landed’ is a vodka soaked seduction with a side of f-you; Josh in his falsetto, versus the steadily increasing heartbeat of the song and leans into this swinging flow. The chorus is like a tractor beam – the pulse just totally locks you in. ‘Here We Come’ triggers the unstoppable – come with us is the kindness; if you’re not in – we’re coming anyway. The final track ‘Villains of Circumstance’ is a proclamation; it’s a delicate epic, reverting in what you imagine is some kind of underground lair.

“The songs are long, we didn’t expect that either, it goes to show you that anyone who thought, ‘Oh, Mark Ronson is gonna make them this pop band,’ I don’t think pop songs are six minutes long.”

Villains is an epic and rowdy stoner rock album. What was Shuman’s goal; “to kinda play my balls off.” From that opening blazing bass funk in ‘Feet Don’t Fail Me’, it’s clear that he delivered.

The new album from Queens of the Stone Age, Villains will be released on Friday August 25.

Liked it? Take a second to support Blake Howard on Patreon!

Support Blake Howard on Patreon!
12% complete
When we reach $500 per month we will begin the official BMA Podcast. This will include interviews with some well-known musicians and artists, tips and tricks for publishing in print and online, as well as other discussion topics around Bands, Music and Arts in Canberra!