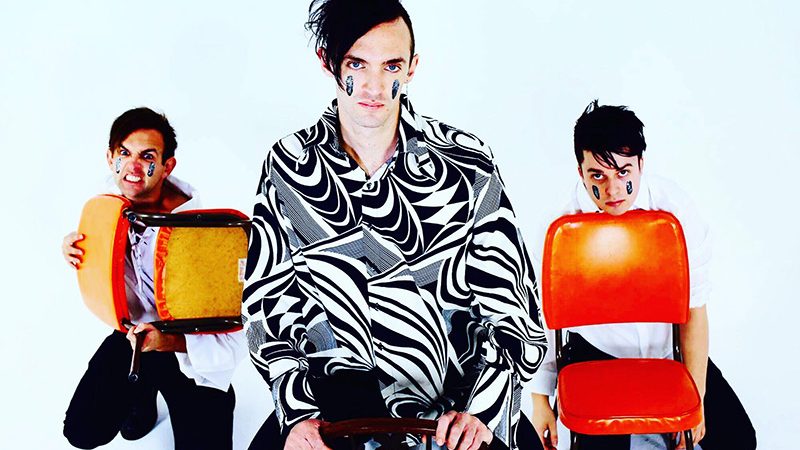 If y’all haven’t heard of DESTRENDS yet, you are missing out. Influenced by 80’s new wave, like Talking Heads, Joy Division, and The Boys Next Door, these boys are fast becoming one of Canberra’s favourite visitors. I caught up with the front man, Matt Savage, to ask him about their beginnings, influences, and upcoming Canberra show.

Based in Melbourne, the band began forming in 2014 after Matt moved to Victoria’s capital from country NSW and met Billy Watts. They jammed together for about a year, trying to complete the trio, but couldn’t find a drummer that fit. That’s where Nathan Savage came in.

“I asked my brother to come and play drums as a last resort (brotherly love) and that was that,” Matt tells me.

These gothic, glittery punks have such a theatrical presence on stage. Their music is typically high energy, something to really get a crowd going. But if you actually step back and listen to the lyrics, they’re mostly quite emotional and personal, with running themes of unfulfilling, failed relationships and emotional struggles. Songs like ‘My Friend’, ‘Lousy Lover’, and ‘Papa’ are easy to connect to, particularly if you’re a young adult having issues with mental illness and identity. Take a look at the chorus to ‘My Friend’ and you’ll see what I mean:

“I’ve got a new best friend, and he’s inside my head.

He says that I don’t have to go to work.

He says that I can stay, and we’ll fuck away the day.

Cos everything else I do just hurts.”

Despite its saddening lyrics, this song is actually really fun and vibrant to listen and dance to. The video is pretty fab as well (look it up!). Plus everything on their album Lousy Lover is well worth checking out.

Canberra has a tendency to be shrugged off and misses out on touring bands all too often, so I asked Matt about his thoughts on whether or not he thinks Canberra is a worthwhile stop.

“I guess it can be missed a lot of the time with touring bands, but Canberra has been very good to us,” he says. “Around the last time we toured, The Phoenix was under threat. It was incredible to see the amount of people in the local community that came out in support of live music and local venues during that time. There’s definitely an audience for live music in Canberra and we’ll keep coming as long as you’ll have us.”

We’ll always have you back, guys. Don’t you worry about that.

Destrends are playing Friday August 11 at The Phoenix with Moaning Lisa and House of Strangers. Tickets available from eventbrite.com.au.