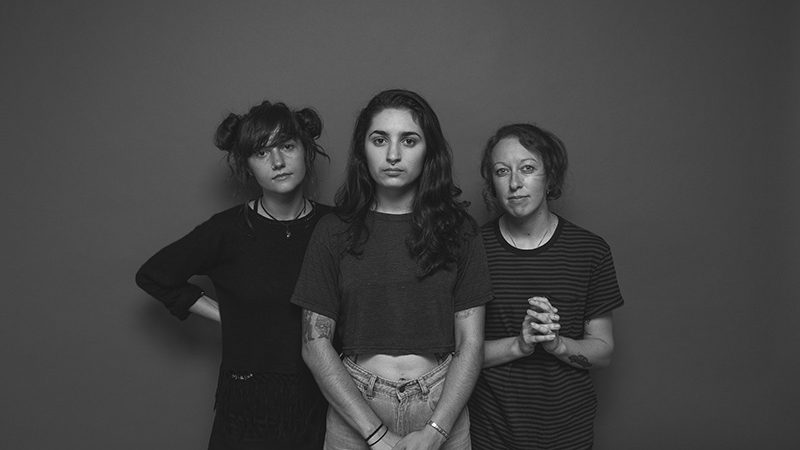 Melbourne-based trio CAMP COPE have ridden a steady trajectory since they released their debut self-titled album in early 2016. Touting indie-punk ballads about everyday demons like mental illness and gender discrimination, the band have found recognition not only for their brutally honest storytelling and songwriting, but also as a social justice movement within the Australian music community. The band find themselves in the eye of the feminist storm that’s sweeping the punk scene and larger entertainment industry at the moment, and I’m interested to find out more about how they got there.

I’m speaking with frontwoman Georgia ‘Maq’ McDonald just after she’s been tattooed. She’s dedicated the fresh ink to two bands she holds dear: a Tigers Jaw branding on her chest, and an Oasis tattoo – reading ‘Supersonic’, after the 1994 single – across her toes. It’s a song for another generation, but I can see why it resonates with Maq; peddling the importance of self-belief and self-expression, Gallagher sings, “You need to be yourself / You can’t be no one else” and “You need to find a way / For what you want to say”.

“We have a platform and we’re able to help and so that’s what we’re doing.” Maq is confident in Camp Cope’s purpose; it’s not just an outlet for her creative expression, it’s also a stage for her and her bandmates – bassist Kelly-Dawn ‘Kelso’ Hellmrich and drummer Sarah ‘Thomo’ Thompson – to address social issues that are important to them. “I think that if you have the platform and don’t use it then you need to step down and make room for someone who can use it for good to help other people, to benefit others. I feel like if you’re climbing, you need to lift as you climb.”

At the forefront of Camp Cope’s achievements is #ItTakesOne, a movement taking aim at sexual harassment and violence in concert culture and advocating for safe, inclusive and respectful live music spaces. Taking off in September 2016, the hashtag went on to garner public support from artists and personalities in the music industry including Julia Jacklin, Courtney Barnett, Frenzal Rhomb, The Jezabels, triple j’s Dom Alessio and many others. Since then, Camp Cope have launched their own safe-space hotline to help fans report sexual harassment at their shows, and they’ve worked with St Jerome’s Laneway Festival to create an anti-harassment hotline for the touring music festival.

That call for inclusivity and respect is understated in the way Maq speaks with me. It’s clear that she’s mostly unfazed by her band’s success, rather it’s her fans and the space she creates for them in live music venues that she cares about. “I feel like it’s really easy [for bands] to talk about, it’s really easy to be like, ‘yeah, we want our shows to be safe spaces for everyone’ – and they’re not? But we’re really loud and we’re not afraid to call people out, ever. And I think that’s why our shows are …” she pauses, and comes back to me with something that feels heartfelt. “I dunno, I like our shows. I hope that people who come feel safe and supported and represented, that’s ultimately what we want. We want everyone to have a good time.”

Our conversation shifts to mental health, a theme that features heavily in Camp Cope’s music. At the time of its release, the band’s debut album was recognised for its earnest lyrics, some of which deal with anxiety, depression and most poignantly, overcoming grief following the death of a loved one. On the closing track ‘Song For Charlie’, Maq sings, “Still hoping I’ll see him on the street / Or in the house he built around me, my sisters, and my brother / For the strongest woman I’ve ever known, my mother”.

“I’m going to get deep with you, if you’re okay with this,” Maq begins. “What ‘Song For Charlie’ is about is, my mum’s partner killed himself. And he was my family, you know? And because he was brought up in a time – he was a tradie – and he was brought up in a time where, you don’t talk about your emotions. Like, you just don’t, that’s not manly, y’know, ‘man up, be a man’. And so that really made me think a lot.”

I remark that ‘Song For Charlie’ has made me cry on more than one occasion. “I feel really strongly that men should be able to express emotions and cry and talk about their feelings, because it’s all part of the feminist paradigm,” Maq explains. “Men are raised to be disconnected from their feelings, and so, we need to teach young men and boys to be sensitive and be vulnerable and … human. Because we’re all human – we all bleed, we all cry.”

The band are prepping to release a new album soon, and I’m wondering if we’re going to see them adopt a new direction. Maq’s answer reinforces a simple truth about Camp Cope: they do things on their own terms. “Musically, I don’t feel like we’ve changed directions at all,” she says. “I feel like this album’s just gonna be exactly the same, production-wise, because that’s just how we are. We want the album to be a representation of what we sound like live, I don’t want to dress it up with anything, I just want it to sound like us.”

“I hope that people who come feel safe and supported and represented, that’s ultimately what we want.”

There’s already whispers of a new, unrecorded song that the band have been playing at their more recent shows, including at the Sydney Opera House for Vivid LIVE, where it was met with cheers of agreement at the end of each lyric. Refusing to compromise their place in the music scene, the song deals with gender discrimination in the industry as Maq sings unflinchingly, “It’s another man telling us we can’t fill up the room / it’s another man telling us to book a smaller venue.”

“If you have a platform, you should support [bands] who are underrepresented in the punk scene, instead of just like, ‘four white men, four white men, four white men and then maybe like a female in the opening band, y’know, just to like, fill that quota, y’know’,” Maq relays to me, with just a little bit of sass. “I think that’s incredibly disappointing, it’s really obvious and I think that needs to change. That’s not the norm for a lot genres of music and a lot of venues. But in the punk scene it is the norm. Sometimes I feel like the punk scene exempts itself from real life, but it does mirror this patriarchal structure that we all live in, and we need to stop mirroring that and make it a safe, and inclusive, and representative space for everyone.” Preach.

CAMP COPE play at The Basement on Tuesday September 19 at 7pm. Support from WORRIERS (US) and THE LAST EXPOSURE. Tickets are $26.55 + bf via Oztix.

If this story has brought up any issues and you need to talk, please call Lifeline on 13 11 14.