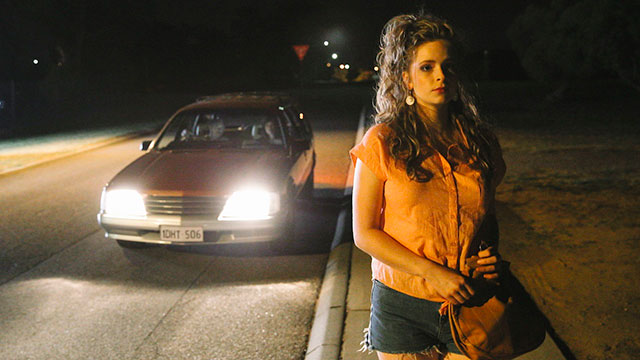 This is not a good time, in fact, it’s an exercise in endurance.

Set in 1987’s sweltering Perth, the film is centred around a couple, Vicki and John (Emma Booth and Stephen Curry) who routinely capture, imprison, rape and murder teenage girls (so, laughs aplenty). Evelyn White (Ashleigh Cummings) sneaks away one night to escape her parents’ disintegrating marriage, only to be ensnared in Vicki and John’s perverted quagmire. What entails is an incredibly stylised and abrasive game of cat and mouse between Evelyn and Vicki.

The script is largely measured and realistic, the cinematography is, at times, stunning, and the performances are magnetic. Ben Young’s name will probably be abuzz in Hollywood, along with Emma Booth for her inspired turn as Vicki.

I was reminded of Justin Kurzel’s Snowtown (2011), an incredibly disturbing and depressing film about the infamous Snowtown murders. That film burrowed into my mind due to its heavy immersion in and exploration of a world mired in poverty and violence. Viewers are left with sickening questions about masculinity, class and sexuality, all pertaining to a real-world story, and real issues in our society.

The fact that Hounds of Love is the product of fiction is puzzling. There is this assumption, due to the contextualisation of the story, the gritty kitchen-sink setting, that it is true. It is not.

Liked it? Take a second to support Pat Johnson on Patreon!

Support Pat Johnson on Patreon!
12% complete
When we reach $500 per month we will begin the official BMA Podcast. This will include interviews with some well-known musicians and artists, tips and tricks for publishing in print and online, as well as other discussion topics around Bands, Music and Arts in Canberra!