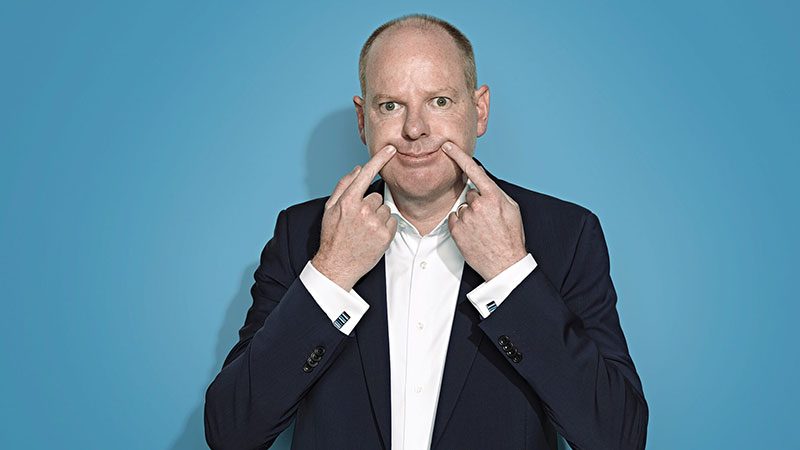 After twenty years on the comedy scene, TOM GLEESON’s star continues to rise. He’s done stand-up, commercial radio, TV and written a book, but after a long-running joke on Charlie Pickering’s show, he finally got his own TV show, Hard Quiz, which is now into its second season. In his latest stand-up show, Cheer Up, Gleeson applies his dry, satirical wit to stories from his own life and to the political sphere in which we find ourselves.

Gleeson first performed Cheer Up in Canberra at the beginning of the year. “This is the show I’ve been touring around Australia, and the very first show of this tour I did in Canberra at the Uni Pub,” he tells me. He is returning to Canberra in August to perform a more polished version. “The show had only just started [then], so Canberra is lucky enough to benefit from a show I’ve toured around the whole nation. The show’s pretty – what’s the word – sharp. It’s had all the corners knocked off it.” While it is always pleasing to hear you’re getting to see the best, it is hard to imagine Gleeson’s comedy is ever anything but sharp.

Indeed, it was the sharpness of comedy that drew Gleeson to it in the first place. He appreciates the binary nature of measuring comedy success: people either laugh or they don’t. “When something gets a laugh, remember it, say it again. When something doesn’t get a laugh, never say it again. That’s pretty much all you have to do,” he advises me. This attitude seems to contradict Gleeson’s comedy style which he describes as sarcastic and cynical. “An easy way to predict the way I’m going to go on most things, as a general rule is, if everybody loves something, I just don’t because I’m very suspicious of mass popularity. When everybody is really into something I think there’s got to be something wrong with this! And if everybody hates something, I think, can it be that bad? Surely it’s got an upside.”

He’s always been this way. “It’s not put on, even when I was a kid growing up my mum used to say, it was never good enough for her to tell me to go do something, I always had to know why I was going to do it. I still feel like that.” Although he prefers to take the path less travelled, Gleeson is cognisant of the need to take as many audience members along with him. “I know there are many different tastes [in comedy] but if you’re too niche you’re only going to have three idiots laughing in a crowd of a thousand and that’s not exactly success, is it?” he says.

“We’ve got [conservatives] saying, ‘stop bullying us for our point of view’. I think sometimes people deserve a bit of bullying!”

While Gleeson is sarcastic and cynical, he is not offensive. His ability to go right up to, but stay the right side of the metaphoric line is what makes his comedy so enjoyable. When I ask him about this he says telling people what he thinks to their face is disarming. “If I make fun of someone I’m usually making eye-contact with them, which is disarming. [When] people say things behind people’s backs, or in the print, people get upset but when you say it to their face, they’re like ‘is that the worst you’ve got?’”

Gleeson also makes fun of behaviours and ideas rather than people, and he engages with whoever he’s interacting with as an equal. “In all the years I’ve done Hard Chat you can probably count on one hand if I’ve ever made fun of someone’s physical appearance and then, it’s probably because I have the same shortcoming in common with them,” he says. “In general, I always go for people’s ideas. Ideas are things people have made up themselves, and also if they believe them, I think they can be challenged. That’s the fun bit. Even when I get into a bit of argy-bargy with people in the audience, it’s always an idea or something that they’ve shared. Usually it’s an exchange we’ve all had fun with and no one walks away feeling bad.”

I suggest to Gleeson that perhaps what the world needs is more of his style of direct communication about ideas. He responds to this by reflecting on the same-sex marriage debate. “We’re in a weird situation where you get people who are anti same-sex marriage saying, ‘can you please stop bullying us’. I suspect gay people for a long time have been bullied, for thousands of years in fact. Now we’ve got people who are conservative saying, ‘oh well, stop bullying us for our point of view’. I think sometimes people deserve a bit of bullying!”

You can revel in Gleeson’s directness at his shows at the Canberra Theatre. The original show quickly sold out, so now Gleeson is doing a second show on the same night. “Maybe I should have just done a bigger theatre, maybe that would have been more convenient for everyone involved,” says Gleeson. You can also enjoy him on the ABC when he returns to host Hard Quiz this August.

Catch TOM GLEESON in Cheer Up at Canberra Theatre Centre on Saturday August 19 at 7pm (sold-out) and 8:45pm. Tickets $42 + bf through canberratheatrecentre.com.au.