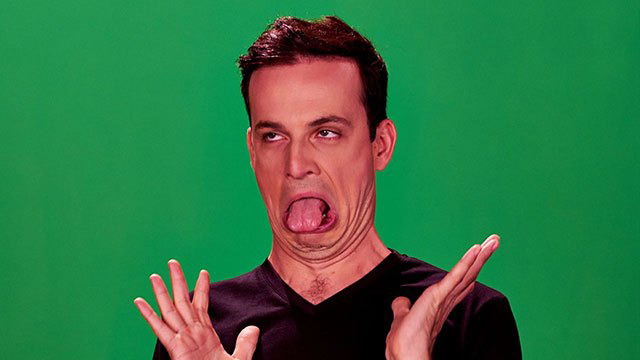 Of all the Australian media personalities with a knack for video games and pop culture, few are as regarded and widely adored as Steven ‘BAJO’ O’Donnell. Bajo was the host of ABC’s ten-year-old TV show about video games, Good Game, before it was cancelled in January of 2017 – much to the dismay of Aussie gamers and long-time fans, myself included. But Bajo remains as one of the faces of Good Game’s children’s program, called Spawn Point, and along with co-hosts Rad and Goose, will be attending Canberra’s staple pop culture convention, the annual GAMMA.CON, to celebrate all things geeky with the capital’s gamers and cosplayers.

I haven’t exactly caught Bajo at the best time, however. “I’m moving actually, today. I’m moving because I want NBN. I’ve become a bit of a Twitch streamer lately and I think if I’m serious about it, I just need to have a higher upload [speed] so I can make it look better. I didn’t realise how much breaking a lease would cost but that’s alright!”

Since Good Game ended, Bajo has turned to Twitch – an internet platform with which people livestream themselves playing video games – so Aussie gamers can keep up with the mature games that he used to play and talk about on TV. He says that connecting with viewers in real-time has really revolutionised the way he interacts with the Australian video games community; it’s like running his own TV show. “The few times I’ve been able to interact with fans of Good Game and viewers has been at conventions and Twitter,” he explains. “But [Twitch] is a direct link, there’s no one in between. It’s really intimate and personal, but it’s also really easy to get a gauge of what you’re doing and how it’s working. If [viewers] like or don’t like something, they tell you straight away … it’s very reactive, and it’s exciting. I get a lot of energy out of doing live stuff in terms of trying to make things as crazy as possible.”

With Good Game’s cancellation and his former co-hosts Hex and Nichboy leaving the show to host screenPLAY on 7mate, one would think 2017 has been difficult for Bajo. But as well as livestreaming on Twitch, he’s actually been busier than ever. “I’m still working full time for the ABC on Spawn Point, and I’ve been doing Whovians [a Doctor Who talk show] as well,” he tells me. “So I don’t know what the future holds, I certainly love it at the ABC and I love Spawn Point, and you would have to drag me away, you would have to – what’s the word I’m trying to find – sorry I’m going to sit down and stop moving around and breathing heavily in your ear,” he laughs, still caught up in moving. “You would have to pry my cold, dead hands away from Spawn Point. I will never leave until they basically ask me to leave!”

“There’s a lot of parents out there with autistic children and video games are the only way they can connect with them.”

It’s no secret that video games are a booming industry in Australia, and their steady popularity has helped pop culture conventions like GAMMA.CON pick up speed. What used to be a hobby on the fringe has passed into the mainstream, but is it fair to say that Australia is becoming geekier overall? What’s the cultural function of conventions in Australia? “Conventions feel like a safe space, I think. There’s still times when I talk about video games around people who don’t play games … people who have no idea what a game like Uncharted 4, or The Last of Us, or Skyrim, even – or emotional journeys, like Journey, Telltale games, and all these games doing such unique and interesting things with emotions and pushing the medium – are doing. They just have no idea, and I feel sorry for them, I don’t even know what those people do! Do they just stare at walls? What do they even do with their time?!

“When I go to conventions, like, ‘these are my people’, that’s how I feel! Y’know, when I was a kid, there was one girl I knew in my school who played games, and even out of all of my friends, maybe ten percent played video games … you won’t find someone 14-years-old today who doesn’t play some sort of video game. Everybody does now.”

I find it fascinating how Australian gamers regard Bajo with celebrity status; I have to ask him about the kinds of experiences he’s had meeting his fans at conventions.

“When we first started doing conventions, kids would come up to me and – especially when we started Spawn Point, our kid’s show – they bring us artwork and they’re so excited about the games that they’re playing. They really come out of their shells. So you see kids who are seemingly quite shy, but when you get them talking about games, they open right up, and you see parents light up too, because they’re looking at their kid coming out of their shell in this moment and that’s always so beautiful to see.

“And when Good Game ended, we had floods of messages for weeks – beautiful, beautiful messages. What the show did for a lot of people, which I only really discovered this year, was it connected people. Much like conventions, it got people to come out of their shell and talk about things they love and also see that it’s okay to truly nerd out and love these kinds of things,” Bajo says. “There’s a lot of parents out there with autistic children and video games are the only way they can connect with them. And so by watching our show and just by getting involved with games, it’s really opened up relationships and connections that just did not exist before, and that just brings legit tears to my eyes.”

BAJO, RAD and GOOSE are appearing at GAMMA.CON at the AIS Arena on Sat–Sun Aug 5–6. Go and check out video games, indie games, tabletop games, cosplayers, vendors and artists, panels and workshops. More info at gammacon.org.au.