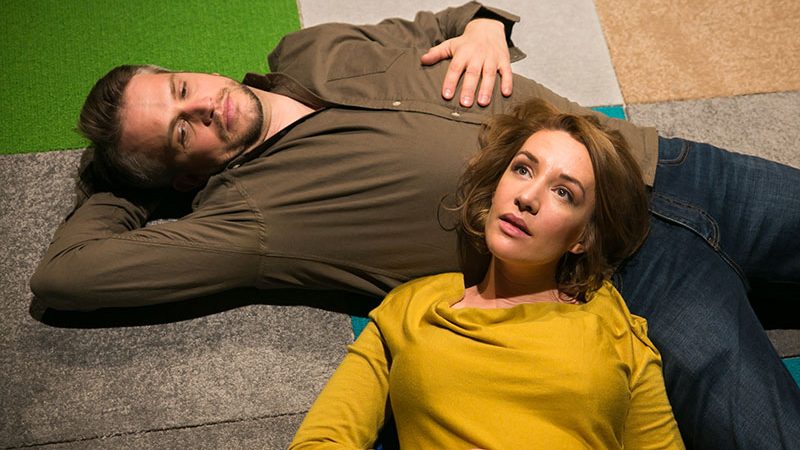 Only a few days into rehearsals, Lexi Sekuless and Kristian Jenkins act like they’ve known each other for years. The pair joke, tease and chat like best friends, a dynamic that will serve them well in their show CONSTELLATIONS.

When I sit down with Sekuless and Jenkins at The Street Theatre, neither one of them have done their “homework.” Constellations is a romantic comedy about a quantum physicist and a beekeeper who fall in love across 50 universes. 50 universes means 50 Mariannes and 50 Rolands, and the two actors need to work out a backstory and given circumstances for all of them. I steal a glance at Jenkins’ homework – all I can say is that acting seems difficult.

The two are both relatively new in theatre – Sekuless studied a Bachelor of Acting in London’s Central School of Speech and Drama, but took a break just to see if she really wanted to pursue acting. True to Canberra, she worked in politics, but: “I got sick of being the weird one, the one who would burst into song.” Anyway, the duplicity of politics wasn’t for her. “The duplicity of theatre instead,” Jenkins quips. The part came to her without an audition: “I was actually auditioning for other things this year, and Caroline (Stacey, director) waited ages to call me and I thought I hadn’t gotten it. And she called and said that I wasn’t right for a few other things but that she hadn’t told me she was doing Constellations, did I know it? And she just offered me the part.”

Jenkins has had plenty of film, television and theatre experience (including a stint as Macbeth in his hometown of Cardiff, Wales, and on ABC’s new miniseries The Easybeats). Constellations is his Canberra debut, and like Sekuless, he didn’t audition for it. Someone else had been cast as Roland but had to pull out. “So Caroline went around Canberra asking people if they knew anyone who was right for the part and my name came up. Somehow or other, people had heard of me, even though I’ve been living under a rock. Just must be my natural charisma.” “Oh, don’t,” Sekuless says. (He still doesn’t know who recommended him.)

The show is highly technical, with so many different universes to keep track of. Sekuless explains: “there are these key life events – the first time they meet, their first date, their second date, you have these little packages of universes.” Neither Jenkins nor Sekuless are convinced that the show will go off without a hitch, without one or both of them mixing up universes and confusing the audience (beyond the normal level of confusion.)

“It is challenging,” Jenkins says. “It’s the most challenging thing I’ve done in the theatre by far from a technical point of view. You have to repeat lines over and over again (in different universes), it has the potential to be extremely confusing.”

Hence the homework they’re doing, and the solid four weeks of full time rehearsal ahead of opening. “You actually fast track learning about someone,” Sekuless says of working in a cast of two. But simultaneously, “this week I’ve been quite overwhelmed with the fact that it’s just the two of us,” she admits.

“I’ll look after you,” Jenkins says, gently mocking, and the pair launch into what seems to be a well-trodden to and fro: “the joking is not really looking after me!” Sekuless retorts. “I am a paragon of masculine leadership,” Jenkins intones seriously. They both burst into laughter.

CONSTELLATIONS is showing at The Street Theatre from Fri-Sat July 14- 29. Tickets from $35 + bf through patronbase.com/StreetTheatre.

Horton isn’t unaware of the fact that lighting doesn’t always garner a lot of attention. “Lighting is a creative layer, like the costumes,” he says. “I go to the theatre a lot and I’m guilty of not always noticing the costumes. The design behind them is always integrated, and very careful choices. So it’s sometimes about creating something that people don’t really notice, and they won’t be able to recall the lighting. But it really is part of immersing the audience in the piece.”

The Street Theatre is a natural fit for Horton, with its focus on developing artists in their early careers, and he is eager to tackle the challenge of Constellations.

“What you don’t want is for people to be able to go to other places in their mind and drift out,” Horton says, given audiences don’t always have long attention spans. “So by helping to immerse people in that world as much as possible, I think that’s very important. And not to be too aggressive. Lighting isn’t a standalone performance here – it’s not the Schools Spectacular or a rock show.”

In fact, Constellations “is a bit more scary” than a rock show. There’s nowhere to hide, and no dazzling lights to distract the audience. “In this show, there is so much discussion and so much subtlety.”