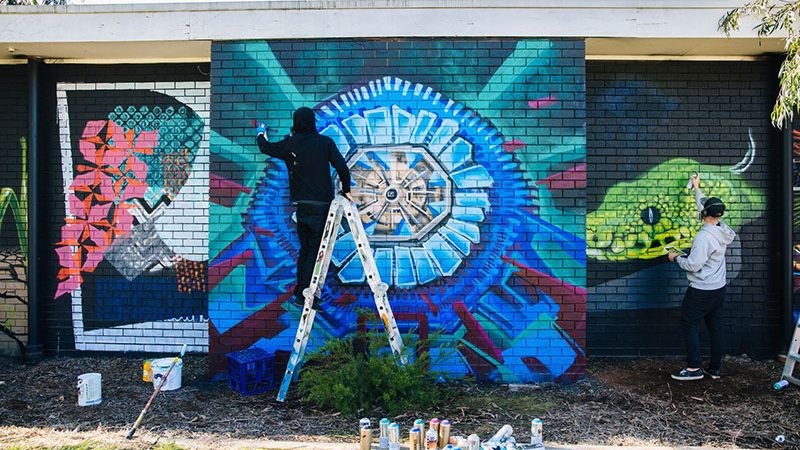 I must admit that I’ve never had a head for science, having dropped it in high school as soon as I could. That’s not to say I don’t care about science – I just can’t make sense of a lot of it. And judging from the vast followings of science communicators like Bill Nye and Neil DeGrasse Tyson, there are plenty of people in my boat: not avid readers of scientific journals, but interested in learning about science.

As a graduate of ANU’s Master of Science Outreach, Lee Constable has a professional interest in educating the public about science in an engaging, educational way. Lee is the founder of CO-LAB, an event which pairs scientists with street artists, resulting in a work inspired by the scientist’s work.

Co-Lab had its origins as a uni assignment. “We had to do an assessment which was based around trialing an event which would be appropriate for something like National Science Week,” Constable explains. Mixing science and art is nothing new, but generally these collaborations are “more exhibition style”.

Constable’s interest in street art led her to the idea of having artists not just represent science, “but getting them to collaborate one-on-one with a young scientist and learn about their work and their discoveries.” The artists then develop a concept and paint a wall inspired by that work. The first Co-Lab took place in 2015, on a fence at the Westside shipping container village (RIP), coinciding with Floriade. “A lot of people were coming through, and it was really exciting.”

Lee specifically seeks out local, early career scientists: “I wanted to give the scientists themselves a really positive experience of communicating their work to non-experts and collaborating with an artist to do so.” Co-Lab gives exposure to working scientists she says. “I guess that was part of the motivation, the opportunity that this would give early career scientists.”

Whenever you come to Co-Lab, you’ll be able to watch the artworks form, read about the science behind them and the scientist themselves, and even speak to the people involved. This year the topics include earth and environmental science, evolution, health and medicine. “I guess my hope is that this will personalise science for people, and give people a sense of ownership over it – it’s putting local scientists into the public sphere.”

Catch CO-LAB at the Old Bus Depot in Kingston on Saturday August 12 from 11am. Entry is free, more info at scienceweek.net.