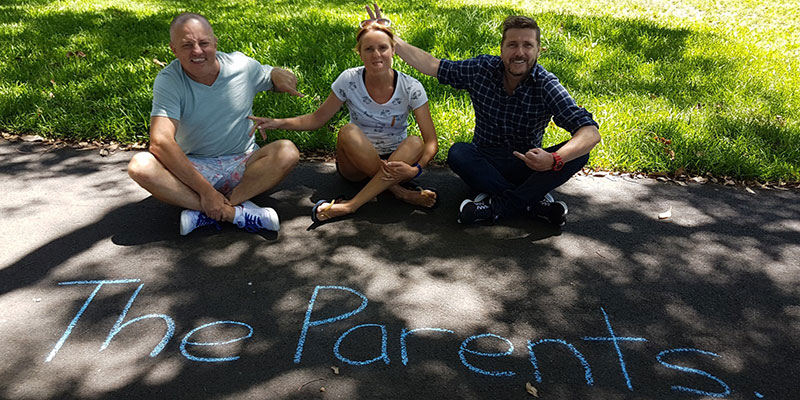 There is a lot of advice out there for parents, and most of it can have the effect of making them feel worse about themselves as they discover yet another way that they are failing their kids. Not so the parenting advice dispensed by Chris Radburn. Father of three, Radburn created the web-series THE PARENTS to provide some comic relief about the relentless torture of being a parent. Radburn writes, and performs in, the series with Katie Burch (mother of two) and one-time local, Sean Woodland (father of two). And now the three of them are coming to Canberra to present an evening of stand-up. “[Parents] all think what we say,” says Radburn. “We’re just being honest about how hard it is!”

The episodes in the web-series are short, thirty second sketches. “They’re not too long because, let’s face it, not too many people have a much of an attention span and especially parents, they don’t have much time before one of the kids is whinging about something,” says Radburn. Each sketch exposes the myth of perfect parenting and normalises behaviours most parents probably resort to. “It’s okay to, you know, when [your kids] wake up, give them an iPad so you can have another hour of sleep. It’s okay to do that stuff. It’s not the end of the world if you give them pizza every night for a week, they’re still going to survive. I think there’s that thing out there that people think you’ve got to be this perfect parent and we’re sort of saying, you know what, it’s actually hard and let’s have a laugh about it, otherwise you can drive yourself crazy.”

“It’s okay to, you know, when [your kids] wake up, give them an iPad so you can have another hour of sleep.”

The stand-up show will feature Radburn, Burch and Woodland doing half an hour of stand-up each. And while the show has a ready-made audience Radburn is quick to point out there will be jokes about other topics. But for the target audience, watching an evening of stand-up will be cheaper, probably more effective and definitely more enjoyable than going to therapy.

Radburn, Burch and Woodland are hoping to turn their web-series into a TV show. “We’re writing a pilot and then we’re going to shoot [it] and hopefully get it on TV,” says Radburn. “It will be a cross between The Office and Modern Family – sort of a mockumentary that follows three families and how they’re coping with living in society today.” In the meantime, the stand-up version of The Parents will be touring around the country with Canberra being the first stop. The show played recently at the Sydney Comedy Festival and it was well received. “Parents liked it, so that’s good,” says Radburn. So, book a babysitter, they may be in high demand that night, and enjoy some well-earned comic relief.

The Parents will be on at Ginninderra Labor Club, Saturday July 22 and check out the web-series at The Parents Facebook page.