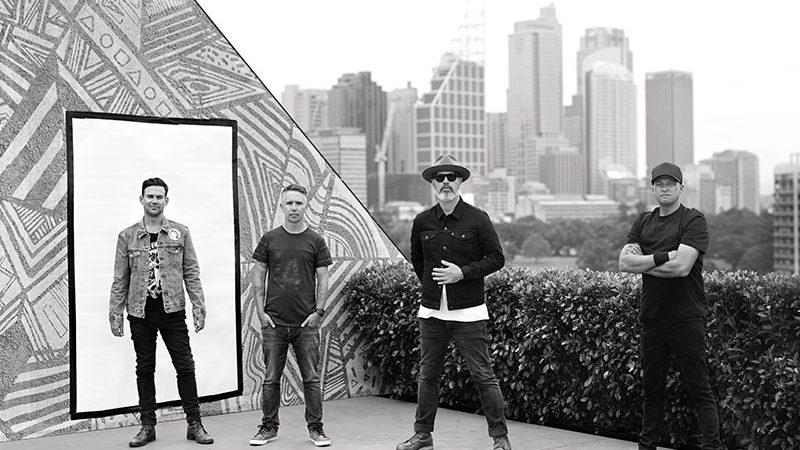 It might make some feel old but it’s damn exciting to have GRINSPOON back on the touring circuit. The group have announced a tour celebrating the 20th anniversary since the release of their debut album, Guide to Better Living. The announcement has created somewhat of a frenzy with the majority of shows selling out within hours of tickets being released.

“You’ve always gotta be a little conservative when you haven’t been out in a long time,” says guitarist Pat Davern. “We weren’t sure how much love there was out there actually for Guide to Better Living.” Davern is somewhat modest about the positive tickets sales. “It looks like the tour could keep going on longer than we expected.” Additional dates for Sydney, Brisbane and Newcastle have already been added.

It’s important to appreciate just how big an impact Grinspoon made with their debut. The album went double-platinum off the back of singles including ‘Pedestrian’, ‘Just Ace’, ‘Repeat’ and ‘DCx3’. The last two broke into Triple J’s Hottest 100, cementing the band as an Australian rock mainstay early on in their career. Grinspoon went on to rack up a record seven Big Day Out appearances and performed at the NRL Grand Final and Commonwealth Games. When you add it all up, it’s not hard to see why Guide To Better Living is pricking up ears two decades later on nostalgic value.

Accompanying the tour will be the release of a deluxe edition of the album that will include additional tracks and a live disc recorded at iconic New York club, CBGB. “There’s a new track from the Guide To Better Living sessions in 1997 that was never put on the album,” says Davern. “I don’t know why. It’s called ‘Green Grass Meadow’. Maybe it’s the title that stopped it.

“We’re gonna have to relearn a lot of them to be honest. There’s definitely songs on the album that we’ve never played live.”

“We used to play CBGB’s quite a bit. At one point Universal brought a recording truck down, I think it was the first time we played there when we first hit New York. When we went scouring for stuff to put on the deluxe edition, that turned up and it actually sounds really good. We were young and the band was on fire.” Davern later cites CBGB as one his favourite venues. “I probably took it a little for granted when I was there.”

The upcoming shows will see the group perform the album in its entirety, followed by a set of songs from the rest of their career. “We’re gonna have to relearn a lot of them to be honest. There’s definitely songs on the album that we’ve never played live, or like we may have played right back when we first started.”

I ask Davern whether the band are contemplating the release of new material in the future.

“There’s definitely a possibility,” he says. “I’ve got a recording studio up where I live in Byron Bay. I’ve invited Phil to come down in the next kind of month or so to do some writing with me so who knows what will happen. We haven’t done that for a long time, it’s been five years since we wrote a record. He reckons he’s got something, I’ve got something, so we’ll probably just knock out a couple of songs and see what it’s like and if we think that it’s worthy we’ll see what happens.”

Grinspoon were one of the first Triple J Unearthed bands back in the day before there was the website and uploading options. Their entry was via a cassette submission. “When we started it was integral,” says Davern. “It was just the rollout of Triple J nationwide. It opened up opportunities for us to be able to tour to places where people wouldn’t have heard of us otherwise. It got us recognised by other bands who took us on the road with them.”

The intensive tour schedule that’s seen the band rack up well over 1,000 career shows isn’t so far-flung from the reality Grinspoon experiences on tour these days. “We’re not doing six nights a week anymore,” says Davern, wary that things will be a little bit different this time around. “We’re doing three or four this tour because it’s a long show”. Never ones to take things too easy, the band have still packed their tour with 27 dates, including stops in regional centres like Albury, Wagga Wagga and Lismore, their hometown. The key to making it work? “We’ll be in nicer hotels, man.”

Having followed the band since their Unearthed days I also had to confirm a late ‘90s memory I have of Davern performing in a wheelchair. “I think that was Homebake in Sydney in 1997,” he says. “Or beginning of 1998. I’ve actually tried to find that online, but it’s never been posted.”

Don’t miss GRINSPOON when they hit UC Refectory on Saturday September 16 from 8pm. Tickets are $68.35 via Oztix.

Support Jarrod McGrath on Patreon!
9% complete
When we reach $500 per month we will begin the official BMA Podcast. This will include interviews with some well-known musicians and artists, tips and tricks for publishing in print and online, as well as other discussion topics around Bands, Music and Arts in Canberra!