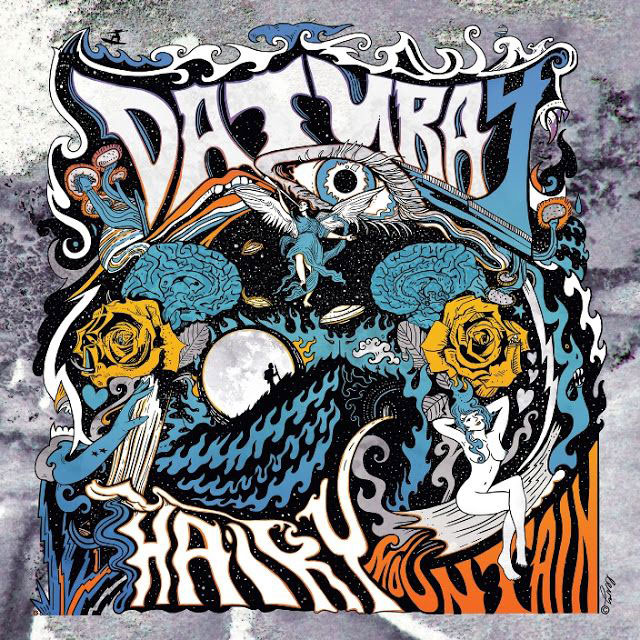 “Beware the false allure of bottomless materialism!” So sing the prophets of DATURA4. Formed in Fremantle 2009 from past members of The Stems (Dom Mariani), The Bamboos (Greg Hitchcock), Rippled Souls (Stu Loasby) and The Drones (Warren Hall), the band specialises in hard rock with blues and psychedelic touches.

There is a simple formula to the band’s second LP Hairy Mountain, with robust riffage, bursts of psychedelia and strong choruses in longer than average tracks. ‘Fools Gold Rush’, the band’s first sermon against the false temptations of the world, sees churning, murky riffs welling up, as hot as lava. The music has a ‘70s feel, but the vocals carry a more contemporary tone, with their slightly blurred edges. Reverb decorates the guitars in ‘Trolls’, about critters that are much nastier than those in the recent DreamWorks film of the same name. A more understated line to the core sound of ‘Uphill Climb’ generates a bluesy feel to the track, while the biggest blues injection occurs in the great, chugging diesel riffs of ‘Greedy World’, in which the insatiable nature of material desires recurs.

The honour of album highlight falls to two songs. The title track, which digs deep with slow, dirty riffs, caries the disk’s most appealing melody. There is a sense of confined strength, until the band lets the dog off the leash towards the end with a fury of unconstrained licks. Closer ‘Broken Path’, with its acoustic intro and contemplative, drawn-out licks, may make the strongest connection to the listener, bringing to mind far-flung but unforgotten long-time friends.

Hairy Mountain represents good, solid stuff for devotes of rock with a harder edge, while sticking this side of the precipice that leads to metal.