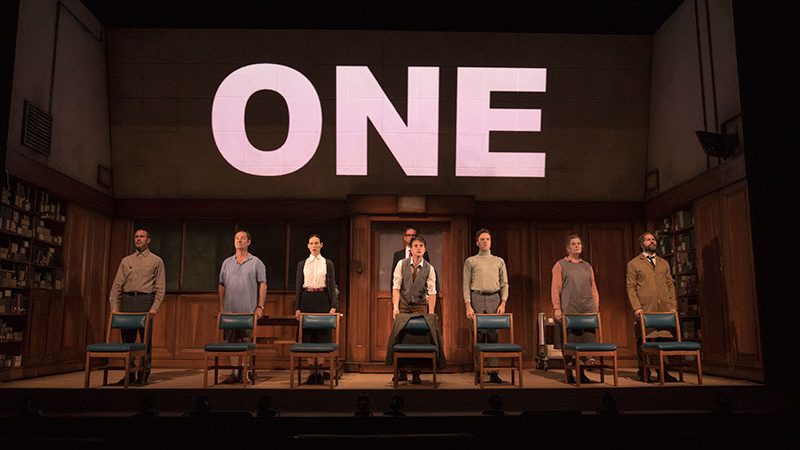 There are few books that seem as eerily prescient today as George Orwell’s 1984. First published in 1949, the setting is a dystopia in which a totalitarian government brainwashes its citizens, inventing imaginary foes, flooding people with propaganda and twisting language. Donald Trump and “alternative facts” are more or less unavoidable subjects when I talk to Tom Conroy, who plays protagonist Comrade 6079 – Winston Smith.

Conroy first read the book a few years ago. “I have a very long list of classic books that I feel like I should have read but I haven’t,” he confesses. “I was really struck then by the brutal speculative world that Orwell created there. When I got asked to audition for it, I was both excited and nervous about the prospect of diving into that world.”

Inevitably, world events like Trump’s election and Brexit came up when rehearsing the play. “It was too relevant to not talk about,” Says Conroy. 1984 is troublingly relevant today, even more so than when this production was staged in the UK in 2013. “There are huge world events that have happened since then that have radically changed the global landscape, that the creators of the play couldn’t possibly have seen. So in a way it’s actually more relevant now than when it was first staged.”

The inevitable example is the Trump administration. “It’s so easy to find parallels with the world of 1984,” Conroy says. “Alternative facts, doublethink – they seem so closely linked. The idea of fake news, of curtailing freedom of the press and freedom of speech, and dissenting thought really.” And beyond that, reactions against globalisation like Brexit have highlighted the British peoples’ fear of the outside world, and their desire for the state to become more and more isolated in the world. Even closer to home, the aspect of mass surveillance that exists within the story parallels real life.

“It’s so easy to find parallels with the world of 1984 … The idea of fake news, of curtailing freedom of the press and freedom of speech, and dissenting thought.”

This is conveyed by using eight live cameras on stage throughout the show – sometimes hidden, sometimes shown. “That sort of enables us to theatricalise the idea of surveillance in the book but speaks to how heavily we are surveilled by the state at all times.” For the protection of citizens, yes, but this surveillance does curtail individual freedoms as well. And the fact that Australia has some of the most prohibitive metadata laws in the world only adds to the play’s pertinence today.

The show is faithful to the themes and ideas of the book, but unlike most adaptations of the book, creators Robert Icke and Duncan Macmillan were interested in the sizeable appendix at the back of the book. It is often overlooked in adaptations (“probably because it is quite dry and academic,” Conroy says), but frames the protagonist’s story by referencing the story and world beyond that character.

“Through the appendix you find out that the party did fall, that the totalitarian regime was overthrown eventually, and their attempt to remodel and dismantle what they term ‘newspeak’ failed,” Conroy summarises. “And because of that, they set up a framing device for this play that bookends the play. The play begins with a book group sitting around talking about a very famous book – and it’s not made clear whether it’s Orwell’s book or Winston Smith’s book – and talking about ambiguities that lie within the text.”

Conroy has approached the character with the idea that he is an enemy of the state, and knows that his actions will lead to his murder, but still feels that he has a responsibility to act. The idea of your responsibility for the greater benefit of society being larger than your fear of your own personal safety, he says, is key to the character. “I think it’s interesting in terms of the different perspectives and how someone’s actions can be read either as an act of heroism or as an act of sedition.”

Of course, the Party would call him a traitor. The idea of an oppressive government psychologically manipulating citizens in order to control memory, truth and reality altogether is perhaps one of the most disturbing elements of both the book and the play.

“As in the book, there’s a strong sense of Winston questioning the reality around him,” Conroy says. “There’s the sense of the whole idea of memory and what people are allowed to remember, and the way that the Party is able to change the past and therefore has control over the future is very important to the book and I think that sort of underpins the structure of the play. And so through that they are able to bring that internal landscape and dreamlike qualities throughout the book into the play.” Simultaneously, there is a sense of “immediacy and nowness.”

“This production is one which is so visceral and exciting, especially for younger audiences. It’s a production which is loud and bright, and it draws on various horror tropes in bringing the story to life, and it sort of plays out like a thriller really. It’s exhilarating and terrifying at the same time.”

1984 runs at Canberra Theatre Centre from Tue–Sat July 25–29. Tickets from $65 +bf through canberratheatrecentre.com.