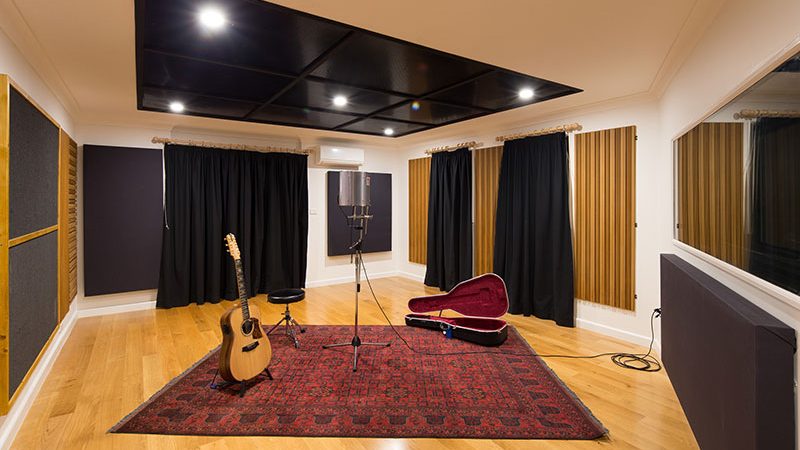 Local songwriter and guitarist Guy Lilleyman has recently opened AMBERLY STUDIOS on his family’s farm in Kambah. Lilleyman, who is one half of guitar/violin duo Guyy and the Fox, built the studio, and now runs it, with his brother, Adam. Lilleyman became interested in recording studios when Guyy and the Fox wanted to record their first album. Before that he says, “I couldn’t have cared less about mics and stuff like that, I just wanted to make good music.” But his attitude changed when he came to appreciate the enormous amount of creativity involved in being a producer and recording and mixing a record.

Lilleyman first got into music in 2011 after going to the National Folk Festival. “Something clicked in me … I really got it for the first time. I saw Jeff Lang, one notable performance, and I was just like, ‘man, I want to do that’. I had never written a song before that.” Shortly after the festival, he left his day job, bought a Combie and a 12-string guitar, and set out to be a musician. Given this story, it is less surprising that when Lilleyman and his brother got the idea to build a recording studio, they set about building it themselves. “We took to doing plastering for the first time and doing floors, we built all the acoustic treatment,” he says. Once the studio was finished Lilleyman and Amelia Gibson used it to record the Guyy and Fox album.

“We haven’t tried to kill the sound as much as try to control the sounds that are a bit rouge.”

The location of the studio turns out to be a great asset. “Because we’re out in a remote location, we don’t have to worry about sound coming in,” explains Lilleyman. “What a lot of recording studios have a problem with is they are like an aniconic chamber [that deadens sound], and so when you play something you’ve then got to liven it up again with effects and things like that,” he says. Lilleyman calls Amberly a natural recording studio because, “we haven’t tried to kill the sound as much as try to control the sounds that are a bit rouge I guess.” Not to mention that a musician can step outside into a beautiful landscape or walk down to the Murrumbidgee River when taking a break during a recording session.

Most of Lilleyman’s experience to date has been in recording acoustic instruments, “at the moment we tend to be encountering a lot of singer-songwriters or small trios, usually without a drummer, but we’ve recently discovered that drums sound pretty incredible in here.” But Amberley Studios is open to working with a wide range of musicians and also has the facilities to record live videos. Get in touch with Lilleyman to discuss how Amberly Studios can help you with your next recording project.

Support Zoe Pleasants on Patreon!
9% complete
When we reach $500 per month we will begin the official BMA Podcast. This will include interviews with some well-known musicians and artists, tips and tricks for publishing in print and online, as well as other discussion topics around Bands, Music and Arts in Canberra!